Censorship on My Bookshelf -- I Rejoice to Burn the Works of Heretics! 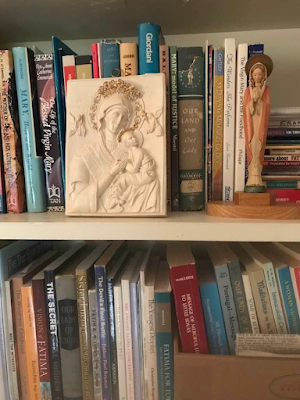 The book burner is at it again. I'm organizing my library of Catholic books and have been going through my Mary shelves.

I have a lot of books that I inherited from a Catholic priest, many of which were gifts to him. The one I picked up this morning has an inscription indicating it was a Christmas gift. The book, Mary and Your Everyday Life by theologian Bernard Haring, C.SS.R., has an Imprimi Potest (approval by a religious superior that a book may be printed) and an Imprimatur (approval to publish by an ecclesial authority which can be the author's own bishop).

So...does this book about the Mother of God cut the mustard, so to speak, to remain on my bookshelf?

Hell no, not by a long shot!

Let's look at Bernard Haring for a minute. He was a progressive theologian who dissented from many Church teachings including contraception which gave us abortion. The "right to privacy" that undergirded Roe v. Wade was invented by the Supreme Court decision, Griswold vs. Connecticut, which overthrew all laws against artificial birth control. (Interestingly, the legislature that passed those laws was not Catholic but Protestant!) Haring was a public opponent of Pope Paul VI's encyclical Humanae Vitae and was a member of the Birth Control Commission that tried to convince the pope to change the teaching and bless sex for pleasure divorced from procreation. Haring was also a peritus at Vatican II and was among those who wrote Gaudium et Spes.

Here's a brief summary of Haring's evil impact from an article at Catholic Culture:

In his 1973 book Medical Ethics, Häring defended sterilization, contraception and artificial insemination. He also suggested that the human embryo does not become a person until the twenty-fifth day…. Häring also wanted a change in the teachings of the Church on the indissolubility of marriage, regarding it as inflicting “cruel hardships on the young.” …According to Häring, under difficult circumstances, we may engage in a process of discernment which leads us to the commission of intrinsically evil acts.

After Haring's death in 1998, fellow heretic Fr. Charlie Curran wrote a glowing tribute for the fishwrap, aka the National Catholic Distorter. Curran was a fellow traveler who stood for every evil promoted by his "mentor."

I opened Haring's book at random to the chapter on Mary's Humility to find this:

Our Lady of the Magnificat shows how false is an individualized religion. Mary is not in sympathy with those who think only of personal salvation and individual spiritual comfort. She is the companion of the Redeemer of the world....She discerns the profound meaning of the history of salvation. She sees the conflict between the Servant of God who honors the all-holy, all-merciful God and...the arrogant spirit whcih manifests itself in over-powering people through misuse of authority and exploitation of the weak and the poor.

This is a typical strawman argument by a guru of "social justice." These faith-distorters create bad guys devoted to persecuting the poor because of their "individualized religion" which, of course, is rigid and pharisaical.  (Sound familiar?) The dissenters then proceed to burn these folks in effigy. The argument's assumption, that those who strive individually for holiness are also persecuting and exploiting the poor, is a vicious lie!

Every missionary saint who was effective in his apostolate of mercy had to begin on his knees in a personal, deep, interior individual relationship with Christ. If he or she didn't have that individual relationship, the apostolate was nothing but an exercise in pride and self-glorification. Look at the great apostles of charity like Vincent de Paul, Mother Teresa of Calcutta, Francis Cabrini, Philip Neri, John Bosco, Francis Xavier, etc. and you will find men and women in a one-on-one relationship with Jesus Christ and His Mother Mary. When Mother Teresa's nuns wanted to spend more time serving the poor in the streets, Mother told them for every additional hour doing charity, they would need to spend another hour in prayer. Social action begins with adoration!

This random chapter illustrated (to me) Haring's disgusting effort to make the Blessed Mother his ally in dissent. He turns her from the one who proclaims her individual relationship with God, "I am the handmaid of the Lord....My soul proclaims the greatness of the Lord. My spirit exults in God my Savior." into an Alinsky organizer.

And so Bernard Haring's book goes into my burn bag. Next time we have a family bonfire, I will rejoice in ripping out pages and watching the flames engulf them. Haring was a brilliant man who could have done so much good for the Church. Instead, his wicked philosophy helped to give us Jorge Bergoglio as pope, a man who praises him to the skies and imitates his evil legacy.

As my mom always said, "You can know a man by his friends," one more strike against Pope Francis. Someone should sprinkle him with holy water at his next public appearance. As for me I'm sprinkling my adulterated bookshelf.

Our Lady, Seat of Wisdom, save us from so-called intellectuals who blaspheme your name and lead people into dissent, heresy, and apostasy.

Most Sacred Heart of Jesus, have mercy on us!