Feast of Christ the King: How the Liturgical Year Ends 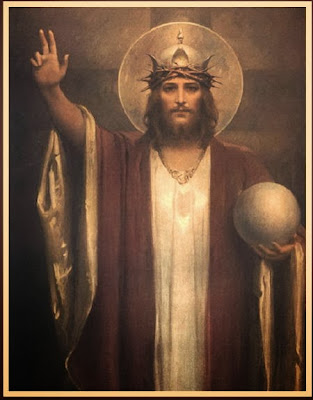 I love that the liturgical year ends with the Feast of Christ the King! The feast has only been in the Church calendar since 1925 when Pope Pius XI created it as a response to the rising tide of secularism. What a gift to the Church! Just think, we begin the liturgical year with preparation for the baby King's arrival in poverty and weakness and end with the celebration of Christ in all His glory and majesty. This year is especially poignant as the feast comes the day after the feast of Blessed Miguel Pro, martyr of Mexico, who died with arms outstretched like Jesus on the cross, proclaiming "Viva Cristo Rey!" Long live Christ the King! As this liturgical year ends, so does the year of faith. What fruits have come from this amazing year? Many firsts: the first pope named Francis, the first pope from the "new world," the first Jesuit pope. Did you have any firsts in your life this year?

The Church in her wisdom chose a reading for today describing King David, the greatest of the Old Testament kings. I remember being struck a few years ago when I read about David in 1 Kings 14:8. The chapter describes the infidelity of Jeraboam, the first king of the northern kingdom after the nation splits. He sends his wife to the blind prophet Ahijah to see if his ill son will recover. She pretends to be someone else, but God tells the prophet she is coming and he welcomes her by name with a boatload of bad news:


So when Ahijah heard the sound of her footsteps at the door, he said, "Come in, wife of Jeroboam. Why this pretense? I have been sent to you with bad news. 7 Go, tell Jeroboam that this is what the LORD, the God of Israel, says: 'I raised you up from among the people and made you a leader over my people Israel.8 I tore the kingdom away from the house of David and gave it to you, but you have not been like my servant David, who kept my commands and followed me with all his heart, doing only what was right in my eyes. 9 You have done more evil than all who lived before you. You have made for yourself other gods, idols made of metal; you have provoked me to anger and thrust me behind your back. 10 " 'Because of this, I am going to bring disaster on the house of Jeroboam. I will cut off from Jeroboam every last male in Israel--slave or free. I will burn up the house of Jeroboam as one burns dung, until it is all gone. 11 Dogs will eat those belonging to Jeroboam who die in the city, and the birds of the air will feed on those who die in the country. The LORD has spoken!' 12"As for you, go back home. When you set foot in your city, the boy will die. 13 All Israel will mourn for him and bury him. He is the only one belonging to Jeroboam who will be buried, because he is the only one in the house of Jeroboam in whom the LORD, the God of Israel, has found anything good. 14 "The LORD will raise up for himself a king over Israel who will cut off the family of Jeroboam. This is the day! 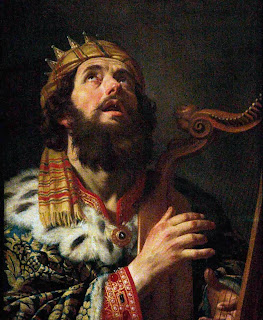 Whoa...bad news indeed! But why did the passage in red set bells jangling in my head? I immediately thought, "Wow, is this the same David who committed adultery with Uriah's wife Bathsheba and arranged his murder in battle? Is this the man who 'kept God's commands' and 'did only what was right' in God's eyes? How to make sense of that? And then I realized.... David committed grave sins, but NEVER against the most important Commandments -- against idolatry and blasphemy. And when David's evil acts were exposed by the prophet Nathan, he immediately repented in sackcloth and ashes. What a verse to give us hope! But also one to give us pause.

At Fatima, Mary told the children that most sinners go to hell for sins of the flesh -- sins like David's that grew out of lust. As we prepare for the coming of the little Lord Jesus, let us pray to use Advent well to grow in the virtues that oppose the temptations of the flesh: modesty, chastity, temperance, spiritual poverty, meekness, generosity, kindness. Why not pick one that is most challenging and work on it during Advent. What a gift that would be to give Jesus on Christmas morning!
Posted by Mary Ann Kreitzer at 5:48 PM