It's Not John Kennedy's Democratic Party

Now that the smoke has cleared from the election maybe it's time to start revealing to Democrats what their party stands for. Remember at the national convention delegates shouted down God, although the chair ignored them for political reasons. Think also how they constantly demonize Republicans as people who don't care about the poor (I got this from the dems at our local polling place when I showed them a model of a 12-week developing baby.), want to keep people from having health care, etc. ad nauseum.

Well, check out the video ad a group of democrats made during the 2012 elections. If you go to their FB page, the video is private. Even if it never aired and was a "joke", it shows the mindset of these people.

I don't really recommend watching the video below. It's graphic and extremely violent as the left's "heroes" bludgeon, chain saw, and machine gun down the "Republican zombies."
But consider that this comes from the party that unceasingly pays lip service to civility in politics while they commit slander and defamation against anyone who disagrees with them. Look at the vicious tactics Terry McAuliffe used against Ken Cuccinelli, a man I know personally, who is moral, ethical, and an all-American guy. If our country hadn't been so corrupted by liberalism, he would have been a shoe-in. But the democrats are turning us into a nation that would be unrecognizable to our founders where sodomy is celebrated, commitment and responsibility are denigrated, where the bodies of our children fill the landfills and sewers. Well...you get the picture. 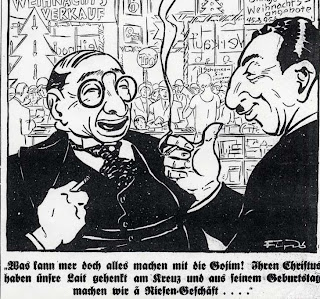 If you have a democrat friend show them the video below and ask what they think about Democrat "heroes" murdering "Republican zombies." It reminds me of the Planned Parenthood "superhero" cartoon video where pro-lifers are depicted as zombies and the superhero woman blows them up. And who's violent?

It also reminds me of the propaganda campaign in the Third Reich against the Jews. Hitler's propaganda machine didn't call Jews "zombies." They depicted them as subhumans, untermenchen, and "rats." These are the same tactics the Democrats use today. The Goebbels propaganda machine painted Jews as fatcat bankers and businessmen and called them "cunning and cruel." Sound familiar? Today Democrats paint their Republican opponents as rich fat cats who are heartless and hate the poor.

We've seen it before, folks, and the end result isn't pretty. Tyrants will use any means (like Alinsky community organizers will) to get what they want even if they have to lie and vilify anyone who stands as an obstacle in their way. Terry McAuliffe illustrated how evil they can be during his vicious, lying campaign. Look for the next election to be dirtier and more negative than ever. It worked for him after all. Wake up a low information Democrat who really thinks the party stands for the poor. They don't. They want them dumb and dependent!

There was a time when the Democrat party was decent. That time is long gone.

Tell it to our Bishops. Tell it to Cardinal Dolan who is falling over himself to sanctify those who run for public office as people of service and civic responsibility. Bring the barf bucket when the amnesty bishops applaud the end of America in the name of "welcoming newcomers." I hope that someone does bring a lawsuit against the Catholic Church for lobbying for the Demons.