We are in Big Trouble and the Constitution and Bill of Rights Will Not Save Us!

Centralization of government kills freedom. When one party controls all three branches of government, freedom dies. We are there with only a few strict constructionist judges holding the line. All the institutions of government are in the hands of the tyrants and will be controlling our lives from cradle to grave!

Gridlock is a blessing! We need more of it!

Listen to Antonin Scalia and take his words to heart. We will not see his like again. Listen to him describe the Bill of Rights of the Soviet Union before the fall. It was greater than ours with even more "freedoms." As Scalia says it was a "parchment guarantee," meaningless in real life. Learn to love the gridlock, he says, which protects minorities. "It doesn't take much to throw a monkey wrench into this complex system [of ours]." The Framers knew what they were doing.

Our freedoms are in a state of collapse. With the invasion of President Trump's home, with the jailing and abuse of rights of those arrested on January 6th, with the laws in many states protecting criminals while they terrorize the citizens -- we are in deep trouble. Unless we throw out the monsters in government who are looking more and more like the Committee of Safety of the French Revolution, we may be seeing the end of the great American experiment. The Founders gave us a Constitutional Republic "if we can keep it" as Benjamin Franklin said. We are all the keepers of the Republic. Most of us are failing to do our part to keep freedom alive. Read The Federalist Papers. Read and defend the Constitution. Lying liberals say "No one is above the law," when they justify the FBI invading Mar-a-Lago, but we all know that Hunter Biden is above the law. So are Bill and Hillary Clinton. So are all the Democrats whose illegal activity is ignored.

And do you really think the 87,000 new IRS agents are being hired to make sure the rich pay their fair share of taxes? Their job will be to go after every 501.C.3 organization that violates the agenda of the tyrants: the pro-life educational organizations and crisis pregnancy centers; the second amendment defenders; the Catholic groups and educational organizations that will not embrace gender insanity; the Catholic Church, colleges and university that refuse to jump on the woke bandwagon; gyms, stores, and other organizations that refuse to let biological men use women's restrooms and locker rooms.

Wake up, you people who trust Big Government. Madame De Farge is the  House Majority Leader. Robespierre is pulling Biden's strings. If you think you're too small to be impacted, you are like the dressmakers and shop owners who were shocked to find themselves on the tumbrils rolling to the guillotine. 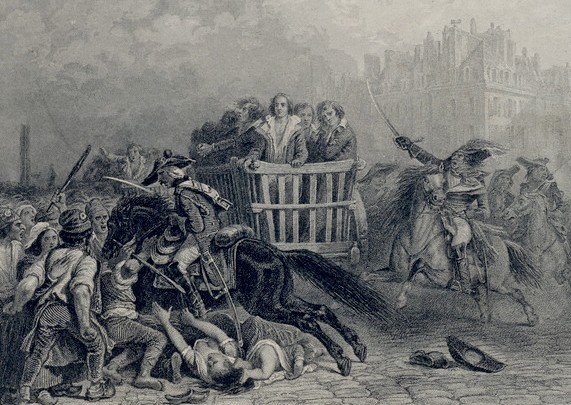 Look at the persecution of cake decorators, photographers, florists, and wedding consultants who refuse to participate in same-sex weddings. What makes you think you won't be targeted next just for believing that sodomy is a sin or that abortion is evil. The would-be-assassin who targeted Justice

Pray the rosary daily and do your part by being educated and voting as an intelligent citizen with a godly heart and mind.

We live in a digital virtual world. The coming vote this Fall will be virtual. Our wealth (that we think we have) is virtual.

What is virtual reality? “A simulated experience that can be similar to or completely different from the real world”.

I fear that the will of the people in a democratic vote is no longer relevant - twist a few dials, tweak the algorithm, scan a few extra pallets of ballots, shred a few others and … presto, predetermined outcome achieved.

Don’t like it? Complain too much? Troublemaker? Lack gratitude to the oligarchy? An army of armed revenue agents with authority over your virtual wealth now wait in the shadows to do to our livelihood (our wealth, savings, ability to live) what they previously did with our government: they took it - all of it - and give it back only under their permissions and conditions.

We will know soon enough if this scenario is true. If they steal the coming tidal wave and nullify its electoral power for themselves this November …. that is how we will know that true reality has been replaced by virtual, programmable reality and what we had us now no more.

Susan and Mary Ann, I really have to tip my hat to you. You two, along with Ann Barnhardt, Mark Docerty, Mundabor and Harvey Millican are at the top of my list. I really admire how you both think before you write, do your homework, and deliver your message in layman's terms. It is very persuasive and may God bless and protect you both for the incredible work that you're doing.

On this subject matter, I am of the belief that we have the wrong type of government and always have. Democracy and socialism are both rotten tentacles that map back up to the head of the snake - freemasonry. A (just) Catholic monarchy is the way to go and I know the chances of that happening here are pretty much zip. What we're seeing now is the clip-on mask of democracy falling off to reveal the satanic face of freemasonry. The parallels we're seeing to what happened before the French Revolution got underway are not a coincidence.

Like the Vendeeans, we must resist this tyranny, even if it means imprisonment and execution. This is the valley of tears: Heaven is our true home and if we are fortunate enough to get there one day, we will live under a Glorious and just ABSOLUTE MONARCHY for all of eternity.

All the best,
Andrew

All indications are Aqua is correct. Having been around a while, one thing that people under 40 or so may not appreciate is how very different the world is now, how very different the political class behaves, than it once did. It was always the case that people in Washington said or did things that the people did not like. The people stated their displeasure, the people in Washington heard them, often walked back their faux pax, and changed course. The people had the position of relative power, and it was clear the officials were beholden to the people. The media typically took the side of the people, it did not carry water for the officials. The media questioned, went after deep facts and truths, dug, did investigative work, held officials accountable. This was the way it was all my early life. Around the Obama era, that all changed. Now, Americans are less than nothing, unless they belong to a clearly protected group. We are being encouraged to fear our government, for good reason, and they are not shy about promoting that fear. These people act worried, the attacks on conservatives prove that, but they also act like people who are accountable to no one and will do anything they need to do, to get what they want, total control.
Repentance, prayer, and getting out the vote.

I think that Western Civ is far past the rule of law. In fact, it's insanity or the devil who rule us now. Current peak insanity is the Dutch shutting down their most productive farming for fake nitrogen crisis as well as a USSC justice inability to define a woman. What's next?

Chairman of the Bored said...

"Gridlock is a blessing! We need more of it!"

neither in this world or the virtual world

Scalia talks of the Federalist papers but there is an even more important key to the Constitution in Madison's 1787 Notes on the Convention, (embargoed from publication for 50 years!) in which he observes the discussion that the banning of slave imports by 1808 *would not have an effect on slavery because states like Virginia were increasing their slaves by natural means*

This mentality gave way to full throttle slavebreeding as the slave population grew to 4 million by Civil War. Madison should have exposed his notes to public scrutiny.

Btw, Scalia has a very unprolife interpretation of personhood and the 14th amendment, after all that we did go through in the Civil War to validate created equal.

Here's a portion of the Notes on the Convention:
"...


Mr. ELSWORTH. As he had never owned a slave could not judge of the effects of slavery on character: He said however that if it was to be considered in a moral light we ought to go farther and free those already in the Country. -As slaves also multiply so fast in Virginia & & Maryland that it is cheaper to raise than import them, whilst in the sickly rice swamps foreign supplies are necessary, if we go no farther than is urged, we shall be unjust towards S. Carolina & Georgia. Let us not intermeddle. As population increases poor laborers will be so plenty as to render slaves useless. Slavery in time will not be a speck in our Country. Provision is already made in Connecticut for abolishing it. And the abolition has already taken place in Massachusetts. As to the danger of insurrections from foreign influence, that will become a motive to kind treatment of the slaves.

Mr. PINKNEY. If slavery be wrong, it is justified by the example of all the world. He cited the case of Greece Rome & other antient States; the sanction given by France England, Holland & other modern States. In all ages one half of mankind have been slaves. If the S. States were let alone they will probably of themselves stop importations. He wd. himself as a Citizen of S. Carolina vote for it. An attempt to take away the right as proposed will produce serious objections to the Constitution which he wished to see adopted.

General PINKNEY declared it to be his firm opinion that if himself & all his colleagues were to sign the Constitution & use their personal influence, it would be of no avail towards obtaining the assent of their Constituents. S. Carolina & Georgia cannot do without slaves. As to Virginia she will gain by stopping the importations. Her slaves will rise in value, & she has more than she wants. It would be unequal to require S. C. & Georgia to confederate on such unequal terms...