Fear Not! Our Twelve Star General is Leading Us. 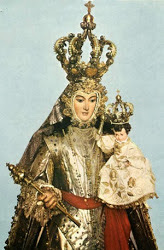 An anonymous reader left a long quote from Blessed Anne Catherine Emmerich on my post about the Synod. These two visions reminded me that, although we are war with the world, we have a general leading us in whom we can place all our confidence. So fear not. The worst that the world can do is kill us, and if we die for the faith, we have a direct, non-stop ticket to heaven. Follow the advice of Padre Pio: "Pray, hope, and don't worry."

April 12, 1820: "I had another vision of the great tribulation. It seems to me that a concession was demanded from the clergy which could not be granted. I saw many older priests, especially one, who wept bitterly. A few younger ones were also weeping. But others, and the lukewarm among them, readily did what was demanded. It was as if people were splitting into two camps."

October 22, 1822: "Very bad times will come when non-Catholics will lead many people astray. A great confusion will result. I saw the battle also. The enemies were far more numerous, but the small army of the faithful cut down whole rows (of enemy soldiers). During the battle, the Blessed Virgin stood on a hill, wearing a suit of armor. It was a terrible war. At the end, only a few fighters for the just cause survived, but the victory was theirs."

The victory is the Lord's. We have nothing to fear. Keep the faith and defend it and all will be well! Our Lady of Victory, pray for us.

Labels: Blessed MOther in armor, defend the faith, keep the faith, Our Lady of Victory, visions of Anne Catherine Emmerich

Hey Phil, thanks for your message. My email is kreitzr1@shentel.net. I haven't watched that Vortex yet. I started it but got distracted.