What Would a "Synodal Church" Look Like? Another Protestant Revolution! 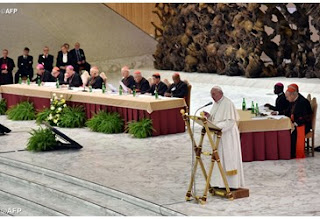 I fear it would not be pretty! And Fr. Z seems to feel the same way.

Note that the pope wants to weaken the curia and talks about "decentralization." How would things be if the pope were just one among equals? If Peter were no longer "the rock" but a pebble among pebbles? Wouldn't the Church then be built on sand instead of rock?

Catholic Family News (CFN) has an interesting and worrisome article on the decentralization and "regionalism" of the Church. Here's the beginning of the article:

During the 2015 Ordinary Synod, we've heard discussion of the possiblity of "regionalism," that is, allowing national bishops conferences to decide diverse "pastoral policies" regarding the Eucharist for the divorced and civily remarried, cohabitation and even homosexuality. In an October 15 interview, Raymond Cardinal Burke rightly said that the proposed "regional diversity" is " simply contrary to Catholic Faith and life. "

Yet Pope Francis himself in an October 17 speech brandished his resolve to "decentralize" the Church, even if he has to impose this decentralization from the top down, which would be a perfiduous abuse of authority.[1]

This un-Catholic "regionalism" and de-centralization did not appear suddently at the Synod, it has a history.

Indeed it does. What I found particularly worrisome about the article was its connecting the dots between the pope as Cardinal Bergoglio and Archbishop John Quinn's desire to reform the papacy. According to CFN The current pope was a great admirer of Quinn and his heterodox book, The Reform of the Papacy:


...in 2012, while still Archbishop of Buenos Aires, Cardinal Bergoglio told Archbishop Quinn, that he had read Quinn’s book [The Reform of the Papacy], and is hoping that what it proposes will be implemented. [4]

In 2013, the National Catholic Reporter (aka The Fishwrap) described Quinn's plans for a new Church:


Quinn, who spoke as part of a daylong symposium, "The Legacy of Vatican II: Personal Reflections," at Stanford University, called for major decentralization of Vatican and papal authority. He said this could be achieved through the creation of regional bishops' conferences and synods of bishops with decision-making authority....

He said shared bishops' decision-making with the pope is needed...

He said shared episcopal decision-making was "the legacy of Vatican II."...

He suggested two governance changes to rebalance church decision-making and to decentralize church authority. Both, he said, come out of church history and tradition: regional bishops' conferences and deliberative episcopal synods.

These moves, he said, would involve separating two aspects of the function of the papacy: "the unity of faith and communion" and administration. The pope would have "the burden of fostering unity, collaboration and charity, but church administration would become more regional."

In such a reconfiguration, the appointment of bishops, the creation of dioceses, questions of liturgy and other matters of Catholic practices would be up to the regional bishops' conferences, Quinn said.

Quinn wants a "horizontal" Church with a castrated papacy, and it appears his vision corresponds to that of Pope Francis. What would that mean? A splintered Church. One of the marks of the Church (Remember those? The Church is one, holy, catholic, and apostolic.), that it is "one," would disappear. A unified liturgy (already problematic) would collapse. Those dioceses that hated the reforms of a few years ago could deep six them. How "catholic" (i.e., universal) would our Church look then? 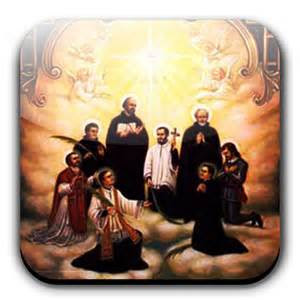 Today is the feast of the North American martyrs who gave their lives to spread the authentic faith in the new world. They sacrificed everything for the salvation of souls. Let us pray for their intercession. If the "reformers" (I prefer to call them revolutionaries.) have their way, it will herald a new protestant revolution. As Fr.John Hardon predicted before he died in 2000, entire dioceses in the United States would disappear. We face that reality today.

Sacred Heart of Jesus, have mercy on us.
Immaculate Heart of Mary, pray for us.
St. Joseph,, patron of the universal Church, pray for us.
Holy martyrs of North America, pray for us.
Posted by Mary Ann Kreitzer at 10:51 AM

I wanted to recommend that you take a look at a brief post on The Badger Catholic site. it has a pretty good summary of TS Eliot's Thoughts on the Lambeth Conferences 1931 and how this Synod 2015 is going down the same path.

History really does repeat itself.

Candidly, I'm not sure what I would do if the Church goes down this path of synodal-ism (is that even a word). The NO liturgy and music is so crappy already. I have such a hard time with all the laughter and applause that goes on not to mention the "slap on the back - howdy - good to see you" during communion, I'd hate to think what I may end up doing ie stop attending Mass.

As Fr.John Hardon predicted before he died in 2000, entire dioceses in the United States would disappear.