Our Lady of the Rosary, Pray for Us! 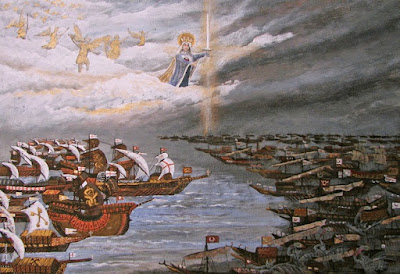 Sometimes truth is more interesting than fiction. The Battle of Lepanto is one of those epic stories. If you want to understand ISIS today, read this article about Lepanto. Here's just one paragraph to show that the monstrous behavior of Islam today is nothing new:


In the spring of 1570, the 4th Ottoman-Venetian war began when the Muslim Turks attacked Cyprus with 70,000 men. The Venetians appealed to Pope Pius V to come to their defense.The Christian defenders of Cyprus were outnumbered by a margin of almost 7 to 1. The city of Nicosia held for nearly two months but, having been reduced to 500 soldiers, surrendered.

Venetian soldiers in Famagusta fought on for nearly a year, but on August 5, 1571, Cyprus fell. The Venetians agreed to surrender terms offered by the Turkish commander, Lala Mustafa, who agreed to give them safe passage to Crete on Turkish ships. Instead, the Venetians were stripped of their clothes, chained to the oars of the Turkish ships, and forced to row.The Muslims beheaded the Venetian commanders and hung their heads on the mast of their ships.

On August 17, 1571, The Venetian governor/commander, Marco Antonio Bragadin, was humiliated, tortured, and flayed alive. Mustafa had Bragadin’s body stuffed with hay and hung on the mast of his ship.

It's important to understand that, from the Turks point of view, everything they did conformed to their religion. According to Islam, lying to unbelievers is acceptable, so betraying the terms of the surrender would not offend Allah. Islam has NEVER been a "religion of peace" and the Muslims committing atrocities today are not "fanatics." They follow the teachings of the Koran. We need a new Holy League to fight the advance of Islam which is devastating so many nations.

Pray the rosary. On so many levels we are experiencing the chastisement for our own sins and those of the nations. We have never listened to Mary's warnings to "stop offending the Lord God." But it's never too late to begin. Let's all be transformed in Christ, our hope.

Are you praying the novena for the Synod on the Family? Today is the last day for the first novena, but the Synod continues for another two weeks. Jump in!
Posted by Mary Ann Kreitzer at 5:54 PM

Labels: battle of lepanto, dangers of Islam, Feast of the Holy Rosary