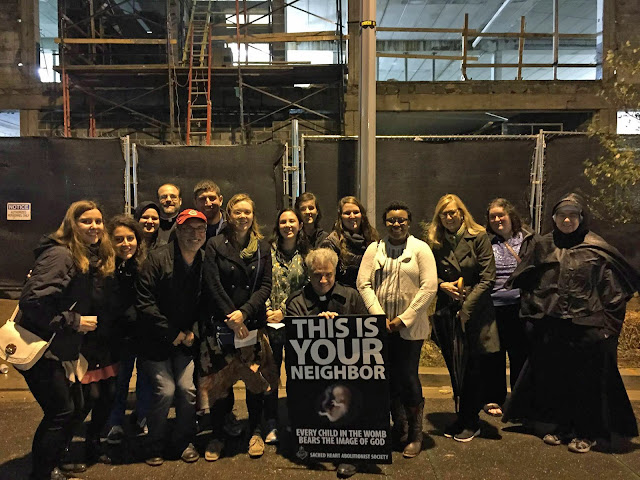 Sad to say, the future Planned Parenthood facility in D.C. where this photo was taken and Father gave is talk is being built by a Catholic owned construction company. My friend Janet blogged about it last August. This friends, is true direct cooperation with evil. Every murder that takes place at this abortion mill will be stamped with the name of Robert Pizzano and Pizzano Construction Company. God have mercy when this man stands for the judgment seat of God. He is not helping to build the Kingdom of God, but the Kingdom of Satan. Please pray for him and all the wonderful witnesses below who participated a few days ago in the vigil. Our Lady of Victory, strengthen all who fight the deadly legions. St. Michael the Archangel, defend us in battle....

There is something that did not go unnoticed by those out here witnessing to the dignity of human life the past couple of months.  As we stood on the sidewalks, or knelt in prayer as participants in civil disobedience, we heard the laughter and playful screams of the children of Two Rivers School as they were out for recess . . . This is, of course, in contrast the silent screams and unspeakable horror that is planned for right next door.

It has also been noted that the address of this coming killing center is 1225 – 4th Street.  Yes, the date we celebrate the Birth of Our Blessed Lord.  December 25th.  May He have mercy on us.

Although the demons rejoice, the Lord God Almighty is not amused.  We remember that Herod – not unlike the principalities and powers in high places of our own day – slaughtered the holy innocents out of fear.  We stand in testimony in the Holy Name of Jesus that He is not indifferent to the cries of those massacred in the name of “choice.”

We stand in witness to Life.  We are in the struggle against the forces of the evil one, the carrier of death and robber of life, because we refuse to be deceived.  We know what our own eyes can plainly see.  We believe that “the arrival of a child is always a gift, a blessing from God.”

Is it not “high time to place greater emphasis on this:  every human being, every tiny human person, however weak, is created 'in the image and likeness of God'?” [Pope Benedict XVI]

We, unlike Herod, are not afraid of little babies and the good things the Lord has planned for them.

The two schools adjoining this would be death camp are models of “Expeditionary learning.”  These schools sound like a great places to learn and to grow.  A place where parents would be happy to entrust their children to.  They are rightly proud of their successes in bringing a community together:  parents, teachers, civic and business leaders for the education of children.

I would just simply ask the teachers and parents to get one of those life sized models of a 10-12 week pre-born and place it into a kindergarteners tiny hands, or the hands of a second grader, even a 6th grader . . . and ASK THEM:  “what is this?”

I would bet you that 99.9% of the time they will tell you, “a baby!”  And they will likely do so with some enthusiasm as everybody loves a little baby!

As Dr Suess wrote:  “A Person's a Person, No Matter How Small.”  Only those blind in the worst of ways cannot see this.

We learned in the Seminary that “truth is the conformity of the mind to reality.”

I would appeal to the teachers and the parents of the children here to allow them in their expedition to discover the truth.  Perhaps we all can learn from mere children what has been hidden from the learned and the wise.

It is a human being in the womb!

This week, everyone’s favorite Catholic Bishop, Nancy Pelosi, was asked a simple question regarding babies in the womb and the harvesting of tissue and organs by Planned Parenthood:  “if the baby in the womb has a human liver, and a human heart, is it a human being?”

Flustered, she replied that the journalist had some sort of “ideological agenda.”  Of course, you and I know defending human life human life has nothing to do with ideology.  It is a basic part of our shared humanity.

I say that Mrs. Pelosi has an ideological agenda:  an ideology of death.

Dear Nancy:  "It is a scientific fact that human life begins at conception.  This has been established in medical science for over 100 years. Catholic moral teaching acknowledges this scientific fact, and has always affirmed the grave moral evil of taking an innocent human life.”  [Archbishop Cordileone]

This week America again mourns the loss of innocent human life in a senseless mass murder.  Mother Teresa spoke to us around 2 decades ago:  "We must not be surprised when we hear of murders, of killings, of wars, of hatred.  If a mother can kill her own child, what is left but for us to kill each other?"

I share with you these words from Pope Francis:  “It is necessary to reassert the strongest opposition to every direct attack on life, especially innocent and defenseless life, and the unborn child in the womb is the definition of innocence.”  “Every Christian is responsible for this evangelical witness:  to protect life in all its stages with courage and love.”

We stand encouraged by Pope Francis who has said to the faithful:  “Defend the unborn against abortion even if they persecute you, calumniate you, set traps for you, take you to court or kill you.”

We stand in vigil because we are Americans and want the Country we love to survive and prosper.

I close with these words from Pope John Paul II:  "That is the dignity of America, the reason she exists, THE condition of her survival, yes, the ultimate test of her greatness:  to respect every human person, especially the weak and most defenseless ones, those as yet unborn."