Really? You Think that Mask is Protecting You from the Wuhan Virus? 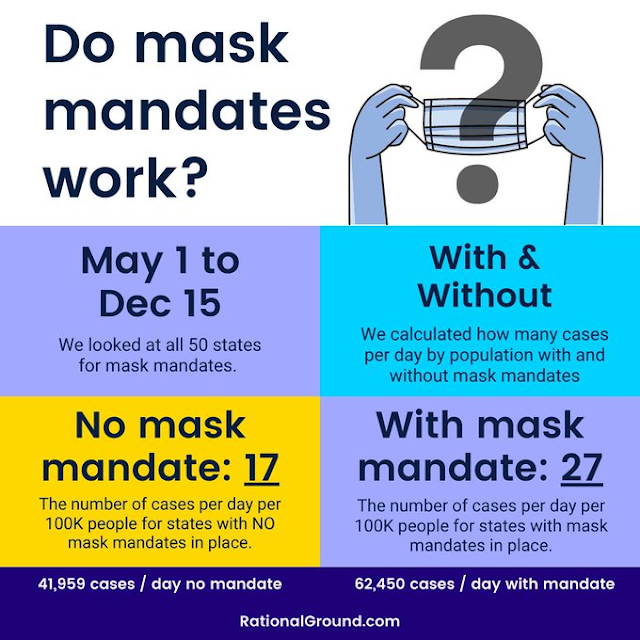 My sister-in-law went to the mall the other day. She said everybody was wearing a mask. She has asthma and can't wear one for more than a few minutes without becoming breathless. But do masks really work? Do states with mask mandates implemented by control freaks exercising their inner Nazi protect people from getting the virus?

A 50 state analysis shows that states with mask mandates have more new cases per day per 100,000 people than states with no mandates -- significantly more. Read the data.

We keep hearing about "the science" without any data to back it up. The liberal left governors mandating these things, like Cuomo in New York, Whitmer in Michigan, and Newsom in California, don't care one iota for science. They want to exercise control over the population. Many people have blindly bent the knee to these modern Herods who want power over life and death.

I'd like to see an analysis comparing this data with the numbers being tested per state. What factor does the amount of testing play matched against the mask mandate/no mask mandate data?

I've been accosted several times recently for not masking. I generally ask the person if he/she is taking Vitamin D3, Vitamin C, and zinc. Then I tell them most of those who've died were seriously Vitamin D deficient. Masks are not the answer. Wake up and smell the coffee (while you read the data). Be your own advocate and practice common sense precautions that reduce the likelihood of contracting the virus and minimize its impact if you do get it. There's no need for panic. According to the CDC, most age groups have a 99+% survival rate. Even those over 70 (I'm one of those) have a statistical survival close to 95%. So why the absolute fear and panic?

Fear! Keep us all separated, fearful, and dehumanized.

Take lots of Vit D, and have added some extra zinc. Not the teeniest bit fearful.

God is the Lord over life and death. Trust in Him and act with prudence and we have nothing to fear! I'm 73 and I echo your sentiments.