Ya Just Gotta Love Congressman Matt Gaitz (R-FL) -- A Man with a Message! 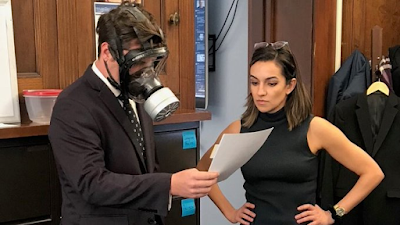 Matt Gaetz, a Florida Republican, is a man after my own heart with a sense of the ironic and the courage to face up to the evil Democrats and the RINOs in his own party. He tickled my funny bone with his photo wearing a gas mask to Congress last March. Here's what he tweeted at the time (from an article by Jack Phillips at The Epoch Times on March 5th):

The Florida Republican defended the move to wear the headgear, telling TMZ that “members of Congress are human petri dishes.”

“We fly through the dirtiest airports, we touch everyone we meet, so if anyone’s gonna get coronavirus, it’s totally gonna be Congress,” he said in muffled tones to the news outlet. TMZ showed a video of him walking to a congressional office building while wearing a suit and the mask.

“We shake hands, we kiss babies, we touch everybody’s cell phone when we take a little selfie with them so, we should be ready,” Gaetz remarked.

When he was asked about where he obtained the gas mask, Gaetz didn’t elaborate.

“I gotta keep that confidential…Top secret. You don’t wanna know what underground lair I pulled this from. It’s not made in China though,” he told TMZ.

On December 19th, Gaetz said he will challenge the electoral college vote on January 6th. He's not alone. Hopefully, many Republicans will join the effort to prevent the 2020 election from being the first election of a corrupt regime that will win every election going forward by fraud and theft. Fight the Steal!

Send Congressman Gaetz a snail mail note (a Christmas card perhaps?) since his office only takes emails from his district. His address is 1721 Longworth House Office Building, Washington, DC 20515. My card is in the mail and my prayers are with him and his colleagues who plan to challenge the illegitimate election fraud.