Guest Post: A Letter to the Bride and Groom 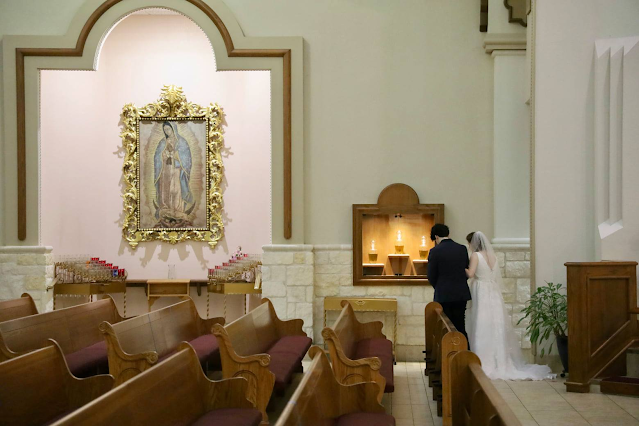 Editor's note: Below is a letter a friend of mine wrote to her nephew and his prospective bride. I applaud my friend for the courage to face the potential anger of the young couple. No one likes their actions challenged. Remember the reaction of Nancy Pelosi when a reporter asked her if she hated Trump? She clearly does, but went ballistic when someone stated the truth! After all, she's a "devout Catholic."
Parents today often seem afraid of their children, even serious Catholic parents. They tend to excuse and enable their children's sins no matter what immoral situations they get into. I'll never forget my exchange with a mom, a daily communicant, telling me they were holding their daughter's invalid second marriage at their home. The young woman was divorced from her first husband and entering a second marriage outside the Church. I must have looked shocked, because, without my saying a word, she immediately said, "What were we supposed to do, alienate our daughter?" My internal answer to the question was, "No, alienate God, of course." Maybe I should have said it out loud.
If we were closer friends I might have suggested we go out for coffee. I could ask her if she thought their action encouraged their daughter to return to serious practice of the faith? Or would their acceptance and even blessing of their daughter's sin make her less likely to think about God and his commandments. Would she and her spouse ever make things right? Was their action more likely to help the marriage last? But we were only acquaintances, and I didn't pursue it except to pray for them.
We told our own children when they were teens that if they married outside the Church we couldn't attend their weddings because we couldn't celebrate a mortal sin. Later on I had the opportunity to remind a child of that when I heard, "Then you don't love me!" I laughed and restated the message we delivered to them as adolescents. We were not willing to be blackmailed into endorsing a moral evil. Fortunately, that relationship ended (It was not likely to be a marriage made in heaven.), and  we never had to make the decision for any of our children. It has, however, arisen with other family members causing some relationship problems. Choosing the narrow path is a rocky road with thorns and thistles along the way.
And so I praise God for Aunt Susan who is willing to take the risk of anger and hostility from her young nephew and his bride. Please pray for the couple and for their family including Aunt Susan. All the names were changed, by the way.
Do you have a story to share?
Dear John,

Your uncle and I are delighted to see you and Jane marry and plan your lives together. We wish you every blessing and happiness. I write because I am troubled that you could be starting your marriage off on the wrong footing, a footing which can affect the success of your married life.

I write about your co-habitation before you are married. I know you both know that God has reserved sexual relations for marriage alone. Your parents have brought you up in the Catholic Faith, which, in its ancient wisdom teaches that sex is ordered exclusively to wedded love.

The essence of your wedding vows are indissolubility, fidelity, and openness to pro-creating children. I am confident that you intend to be faithful to each other for life, and that adultery is the farthest thing from your minds. But now I ask you, “Why?”

Doesn’t adultery underscore that sexual relations are something very important? In marriage, conjugal relations are both life giving and bonding; they manifest an irrevocable love. Faithful marriage is a secure place to raise children. Truly, adultery would be such a betrayal.

So, what does sex outside of marriage mean? If your answer is that it means the same thing, then what is different about marriage? The Catholic Church would say that before you make a public, witnessed, irrevocable vow, you are free to “break up”, to walk away, and that fornication is not at all the same thing as adultery, but rather, some kind of erroneous, diminished imitation of true conjugal relations.

Therefore, because marriage, in all its essential elements, is so precious and sacred, sexual relations outside that bond makes sex for that couple not so precious and not at all sacred, but rather, a sin. Absent that marriage promise, for sure, you each are free to walk away. It’s a sobering thought.

Beyond that, cohabitation underscores two big problems. The first relates to the second:

The first is practical. In your marriage, as in all marriages, there will arise problems- health, jobs, kids. You will not always agree and some of these disagreements run deep. So, who wins? Who is number one in your lives? John? Jane? God?

If God is the answer, you each will have a firm platform of expected behavior, as well as the sacraments to forgive and be frequently renewed in virtue by grace. When love doesn’t feel so loving, you will rely on that marriage day- that covenantal promise you both made to God to get you through the tough days. You will be able to agree to disagree, but will try not to be disagreeable. And that is because love is fundamentally a commitment to the promise- to kindness and sacrifice. (Most of the time, of course, it is a happy feeling too!)

The second problem with sexual relations outside of marriage is that it is sinful. Again- who is number one? Is it God or something else? Do you just pitch out one of the Ten Commandments because you think it is old fashion? Can Ten Commandments change?

Perhaps the questions are: Do you really love God? Do you think He loves you? What about death? Do you want a relationship with Him? He has given you both many gifts, and especially finding each other. Are you grateful? Have you thanked God enough?

“Do you love me?” is the fundamental human question. It means everything. It is even the fundamental God question, when God said that the First Commandment was to love him, and love him totally. With God, love meant a big sacrifice. It is not surprising that with marriage too, love involves sacrifices for the beloved. Maybe willingness to sacrifice for the beloved could well be a definition of love.

I write because I love you, and your parents. I watched you grow up, and I am proud of you. I ask that you think about your relationship to God and each other deeply, so that you start your married life on a rock-solid footing.

Catholic must know Dogma > Ripped from your soul.
If you're at all interested in knowing ... the Catholic Dogma ... that we *must believe* to
get to Heaven, and which you have *never* seen ...

There are over 200 heresies against Catholic Dogma ... in the "vatican-2 council" documents ...50 listed on Section 12 (followed by Catholic corections) > www.Gods-Catholic-Dogma.com/section_12.html

Being outside ... the Catholic Church in any heresy ... leaves one with no chance of getting to Heaven.

Physical participation in a heretic cult (vatican-2, lutheran, evangelical, etc) ... automatically excommunicates you from the Catholic Church (that is, Christianity) > www.Gods-Catholic-Dogma.com/section_13.2.2.html

Mandatory ... Abjuration of heresy to enter the Catholic Church > www.Gods-Catholic-Dogma.com/section_40.html

Dogma that one must Abjure to leave the vatican-2 heretic cult and enter the Catholic Church > www.Gods-Catholic-Dogma.com/section_40.1.html

The Catholic God knows ... what we think and believe ...

Catholic writing of Romans 1:21 >
"They ... became vain in their thoughts, and their foolish heart was darkened."

Catholic Faith (pre-fulfillment) writing of Deuteronomy 31:21 >
"For I know their thoughts, and what they are about to do this day."

Catholic Faith (pre-fulfillment) writing of Job 21:27 >
"Surely I know your thoughts, and your unjust judgments against Me."
Regards – Victoria

It seems, Victoria, that you are fishing for visitors to your blog. Your comment has absolutely nothing to do with the post. I did go to your blog and found this statement to be a serious red flag.

"If you believe there is a website ... besides THIS site, that is Catholic ... please e-mail the * *
site's domain name to > Slave_BVM @ mail.com ... you will be quickly forwarded where
it is wrong (the heresy) ... and is thus working for your eternal damnation"

So every Catholic website but yours is "working for" the "eternal damnation" of souls? Who can take you seriously?

Very a propos blog entry....the question is .....has Aunt Sue gone to the wedding anyway?

If she did, the letter is useless.
Words must be backed by action, especially these days. Maybe I missed it in the article. I surely hope she didn't. Given the intro I thought the letter was written to explain why she she wasn't at the wedding. I was left wanted.

Bishops have chosen to remain silent when politicians calling themselves catholics promoted contraception, abortion ect..but were still allowed by the clergy to be given Holy Communion...now they are faced with making a public decision that corners them in more apologies and excuses....bc let's face it...do we really expect a clear condemnation and formal statement that doing so is committing 2 mortal sins....Blasphemy on top of rejecting God's law? And that they expect Bidden to formally and publicly condemn Abortion and go to to confession????