Rehabilitating Judas: Is this the Vatican Version of a Stephen King Novel? 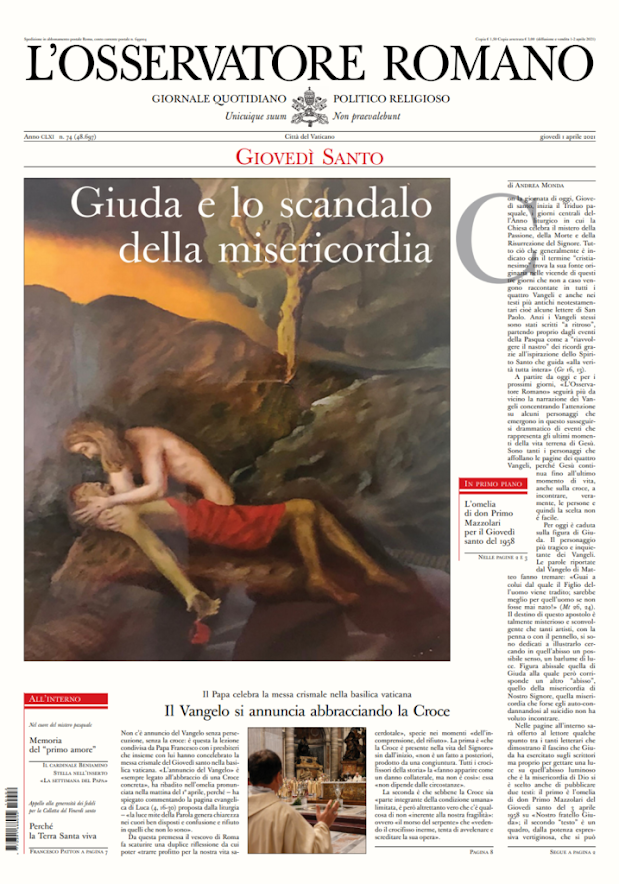 The photo above appeared on the front page of the Vatican newspaper on Holy Thursday of all days. Who is that dead body Jesus is cradling in his arms like a lover?

On one of the holiest days of the year, L'Osservatore Romano dedicated three pages to rehabilitating Judas, the betrayer. He's the one responsible for Christ's glory. Perhaps the next thing coming at the Vatican is a statue honoring Judas installed right next to Martin Luther in Pope Paul VI Hall.

That would be appropriate since the hall is right out of a horror movie designed in the shape of a snake's head with serpentine images all over the place!

The inside is even worse. The window "eyes," the wall that looks like scales.  Everywhere you look you see the serpentine imagery including on the head of the resurrected Christ sculpture. Talk about creepy. I wouldn't go into that hall without a big bottle of holy water. The Vatican is beginning to look like a Steven King novel. And guess where the original of the, dare I say it, homosexual-looking painting of Jesus ministering to Judas?  In the pope's study.

The pope has frequently cast doubt on Judas (or anyone else) being in hell. What does the Blessed Mother know? She was just terrorizing the children at Fatima for fun when she showed them a vision of hell with souls falling in like snowflakes in a blizzard.

LifeSiteNews discusses the Judas issue in more detail. Check out John-Henry Westen's video on the subject. Fr. Z also goes a bit ballistic over the "rehabilitation" of Judas being attempted at the Vatican and commentary in the paper that gave Judas credit for Christ's glory! Going ballistic seems the appropriate response to this abomination.

The smoke of Satan has, indeed, entered the Church and there are plenty of men in roman collars serving the serpent. Cardinal Paglia of the homoerotic fresco claims anyone who says Judas is in hell is a heretic. Sorry, Cardinal, but the Council of Trent and many of the Fathers of the Church disagree.

When will we see the Cardinal accusing clergy advocating same sex marriage of heresy? Or those who champion the murder of the innocent: the little ones waiting to be born and the elderly being pushed over the cliff by euthanasia?

Perhaps an exorcism of Rome is in order.

The link you provided about the snake symbolism is a bit strange. Extraterrestrials?

Rehabilitating Judas? I can understand their logic. If Judas can be rehabilitated, their actions and their warped worldviews will be justified as well - or so they imagine.

By the way - Michael Hichborn will discuss this matter in tonight's Anchor Team episode.

You're right. Strange indeed. I wasn't really studying the text except for the description of the architecture. I was primarily just looking at the pictures of the hall.

I went back and read more and one interesting point he made is that when the pope sits in that chair he appears to be speaking from the mouth of the snake. Putting that into the Garden of Eden imagery (and in view of so many of the pope's evil and questionable pronouncements) I think one can legitimately ask, "Whom does Francis serve?" He often speaks with a forked tongue!

As for a space alien reptilian race I don't think we need to go off planet earth to find venomous reptiles seeking to poison the people of God. Sad to say, many of them are wearing roman collars!

Thanks Janet, I'll try to tune in.

Your comment about exorcists is especially interesting given Father Ripperger's latest video:
https://www.youtube.com/watch?v=kDjy_K9--Ls.
It's been a few weeks since I've listened to it but this is what I recall:

Fr. R states that exorcisms have become almost impossible to complete. In fact, he lays out a timeline of how long exorcisms have taken during the last 60 years. While he never mentions specific popes, the time required to complete an exorcism seems to vary with who the pope is.
For example, prior to 1963, exorcisms could be completed within a few days to a few weeks. After 1963 the time extended to 2 months. Around the time Fr. R became an exorcist about 15 years ago (2005? Benedict?) the exorcism completion time shortened again . Now, he says, they cannot be completed.

I watched that video, Codysmom, and was thinking about it while I wrote the post. The collapse of morality at the Vatican has worldwide implications that are devastating for the Church. Time for all of us to double down on prayer and fasting!

I know, long time no hear from. (You may recall I cannot peruse your site from work... when I was on *break*, that is. LOL)

I try to catch up on weekends, but I rarely post anymore. I thank you for your blog. It has always felt "home" to me.

Hope you & yours have a blessed Divine Mercy Sunday.

(Yes, more praying and fasting after the Easter Octave!)

Demonic. This along with the pachmama debacle convinced me that the folks in charge are either demonically controlled or influenced.

Great to hear from you, Kevin. I've missed you too.

When I saw that cover all I could think was, "It's whip o'clock." Somebody needs to go through the Vatican with a whip and an exorcist.