An Article Worth Reading and Meditating Upon: It Begins with a Scene from The Betrothed....

....a novel recommended by the saintly Fr. John Hardon, S.J. in his Catholic Lifetime Reading Plan. 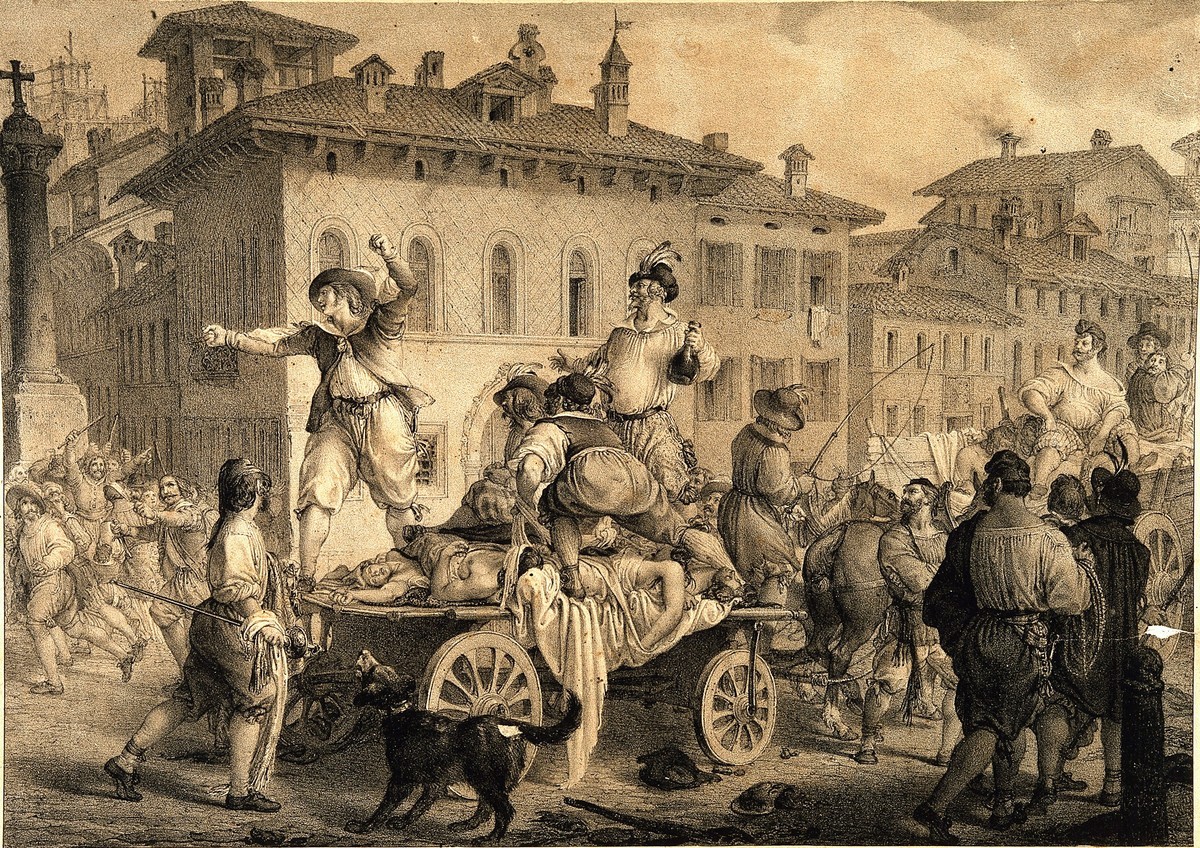 The article, Vax Fanatics and Natural Immunity by Paul Kengor begins with this touching scene from an Italian city during the Great Plague of Milan of the early 17th century that ravaged the Lombardy region:

A woman was stepping out of those doors, towards the carts. She was young, though no longer in the very first bloom of youth, and there was still beauty in her face, a beauty veiled and dimmed but not destroyed by unbearable emotion….

In her arms, she bore a little girl, perhaps nine years old, dead, but very neatly attired, with her hair carefully parted in the middle, and a spotlessly white dress, as if loving hands had adorned her for some special occasion, some long promised reward….

A loathsome monatto went up to take the child from its mother’s arms, though his bearing showed an unusual degree of respect, an involuntary hesitation. The woman drew back, though without any sign of anger or contempt.

“No!” she said. “You must not touch her yet. I must put her on that cart with my own hands. Here! Take this.”s

She showed him a purse which had been hidden in her hand, and dropped it into his outstretched palm.

“Now promise me this,” she went on. “Not to touch a stitch of her clothes; not to let anyone else dare to do so; and to lay her in the earth exactly as she is.”

The author goes on to discuss natural immunity and the "vax fanatics." Fauci et al use that term to describe those who refuse to swallow their kool-aid. Everyone on the planet needs the jab, you fools. Line up and take your medicine! Kengor, on the other hand, means those who demand that even people who've acquired natural immunity through having the disease must submit to the experimental gene therapy. It's the greatest human experiment ever inflicted by "scientists" walking in the footsteps of Dr. Mengele, the Auschwitz "angel of death."
Read the article. It only takes a few minutes and offers much food for thought. As for The Betrothed by Alessandro Manzoni it offers a beautiful meditation on love, suffering, sacrifice, repentance and forgiveness. I thank Fr. Hardon for sending me to its pages. May he rest in the arms of Our Savior whom He served so well.
And please remember, COVID is not the bubonic plague despite the vax fanatics hysteria. Of people under 70 with few or no underlying health conditions, over 98% survive. So take a deep breath, boost your immune system, exercise sensible precautions like you would in any flu season, and trust in God. He, not Dr. Fauci or the CDC, is the author of life and death.
Posted by Mary Ann Kreitzer at 7:50 AM

That book as well as Lord of the world are two shimmering novels that have also been promoted by the broken clock at the top.

I don't understand your broken clock allusion. Can you enlighten me?

"Lord of the World is a 1907 dystopian science fiction novel by Monsignor Robert Hugh Benson that centres upon the reign of the Antichrist and the end of the world. It has been called prophetic by Dale Ahlquist, Joseph Pearce, Pope Benedict XVI and Pope Francis."

And here on the other book:"In my second question, I referred to a nineteenth-century novel very dear to Pope Francis which he has mentioned recently: Alessandro Manzoni’s I promessi sposi (The Betrothed). The novel’s drama centers on the Milan plague of 1630. There are various priestly characters: the cowardly curé Don Abbondio, the holy cardinal archbishop Borromeo, and the Capuchin friars who serve the lazzaretto, a kind of field hospital where the infected are rigorously separated from the healthy. In the light of the novel, how did Pope Francis see the mission of the church in the context of COVID-19?

Pope Francis: Cardinal Federigo [Borromeo] really is a hero of the Milan plague. Yet in one of the chapters he goes to greet a village but with the window of his carriage closed to protect himself. This did not go down well with the people. The people of God need their pastor to be close to them, not to overprotect himself. The people of God need their pastors to be self-sacrificing, like the Capuchins, who stayed close.

The creativity of the Christian needs to show forth in opening up new horizons, opening windows, opening transcendence toward God and toward people, and in creating new ways of being at home. It’s not easy to be confined to your house. What comes to my mind is a verse from the Aeneid in the midst of defeat: the counsel is not to give up, but save yourself for better times, for in those times remembering what has happened will help us. Take care of yourselves for a future that will come. And remembering in that future what has happened will do you good.

Take care of the now, for the sake of tomorrow. Always creatively, with a simple creativity, capable of inventing something new each day. Inside the home that’s not hard to discover, but don’t run away, don’t take refuge in escapism, which in this time is of no use to you."

There are good and bad priests dealing with apocalyptics in both novels. Particularly of interest in manzoni is that the bad priest is constantly and deceptively avoiding delivering the sacrament of matrimony to the protagonist couple.