Vigil of the Assumption: The Eucharist and Devotion to Mary

Dear Readers, Before I begin today's post I beg for your prayers. My son-in-law's mother disappeared Thursday afternoon from a care facility in Arkansas. She has Alzheimer's and was checked in for the weekend while her husband flew to Ohio for the confirmation of two of our granddaughters. Barbara is still missing and, amid growing concern, we all pray for her safe return. Will you please join your prayers to ours? God knows where she is. May he lead the rescue workers to her. Please pray for her and for our family, especially her husband and two sons who traveled to be with their dad as he suffers this terrible ordeal. Our Lady of Good Help, pray for us. 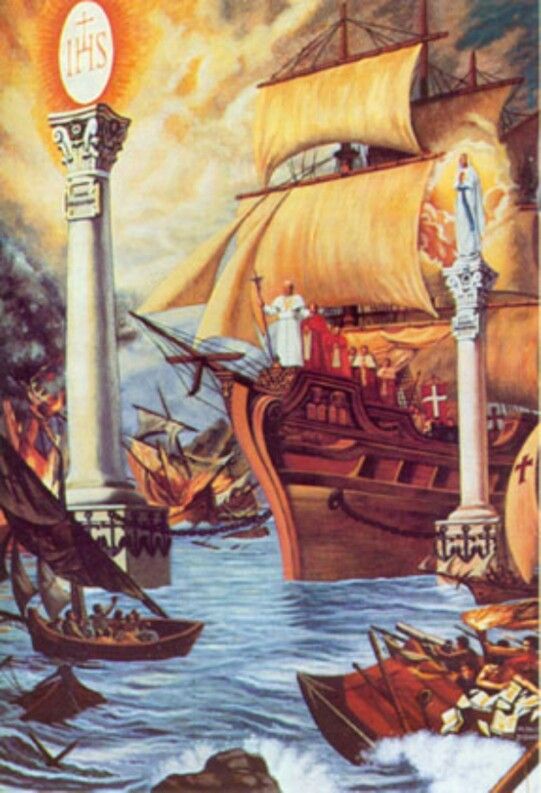 I expect many readers are familiar with St. John Bosco's famous vision of the Church in stormy seas being attacked on all sides by war ships trying to sink her. As the battle rages the barque of the Church anchors to two pillars. On top of the large pillar rests the Holy Eucharist. On the smaller pillar is Our Blessed Lady. Once the ship is anchored firmly, many smaller boats attach themselves to the the ship where the pope stands as its captain.

This morning I reached the fourth book in The Imitation of Mary. I began the fourth book in The Imitation of Christ a few days ago. The conjunction of the messages in these two devotionals reminded me of the vision. Most mornings I read a chapter from each. Now I daily see the pillar of the Eucharist (Book 4 focuses "On the Blessed Sacrament and Devout Exhortations for Holy Communion") side by side with the pillar of the Blessed Mother (Book 4 focuses on "Our Sentiments toward the Blessed Virgin"). When we anchor ourselves firmly to these two pillars, we are safe no matter what the world throws at us -- both from outside the ship and from the mutineers on board many of whom are members of the crew.

In a letter of December 4, 1970 Sr. Lucia wrote. It was a time when the masonic governments of Europe were viciously attacking the rosary and Marian devotion which is essentially a liturgical prayer open to everyone including the poor and uneducated. You don't need to memorize the catechism to understand the rosary:

Our poor Lord, Who saved us with such love, and how little understood He is! How little loved! How badly served! It is painful to see such disorientation, and in so many people who occupy positions of responsibility!

...As much as possible, we have to seek to make reparation by a union with the Lord that is ever more intimate, identifying ourselves with Him, so that He may be, in us, the light of this world which is immersed in the darkness of error, immorality and pride....

[Reflecting on evils occurring] It is because the devil has been able to infiltrate evil under the guise of good, and they act as the blind leading the blind, as Our Lord tells us in His Gospel; and souls go on allowing themselves to be deceived.

Voluntarily I sacrifice myself and offer my life to God, for peace in His Church, for priests and for all consecrated souls, above all for those who carry on so erroneously and so deceived! For our separated Brothers: May God give light to all of them and put them on the right path — the path of Truth, which is Jesus Christ.

I'm reading an excellent little brochure on Fatima which is available on-line. As I prepare for the great feast of the Assumption tomorrow I will be studying it. You can join me in reading A World View Based on Fatima by John Vennari.

My prayers for Barbara … and the family. I know how much suffering there is to descend into Alzheimer’s and for those in the family tasked with caring for their loved family member - slowly but steadily not the person she was for reasons invisible.

There is a powerful testimony available from a man, diagnosed with the disease, who then decided to write about his experience inside his own mind during the descent. The book is finished by his wife after he was rendered unable to write.

Again, prayers for Barbara and those suffering with her, especially her husband separated in two ways from his beloved. It is a horrible thing to lose anything important to you. I can only imagine the suffering if that which is lost is a family member, a spouse.

Btw, thanks also for the meditation. It is the power of the RCC Magisterium that She consists in so much more than the mere living. We can draw on all who came before us, and through them into infinity itself, endless depths and heights, which is Christ our Lord.

Thank you, Aqua. Our two young granddaughters were confirmed this morning. We couldn't be there, but I'm begging the intercession of their patrons. One chose Philomena, the little wonder worker of God, and the other chose two patrons, St. Elizabeth of Hungry and St. Cecilia. May they lead the rescue teams to Barbara and bring her back safely accompanied by all the guardian angels and patron saints of our large family.

Very happy to pray for this missing lady; May Our Blessed Mother bring her back soon.