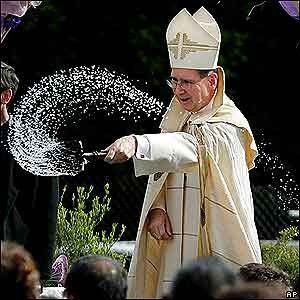 I read Cardinal Mahony's blog now and then for amusement. And now we know he never decided to vote for Cardinal Bergoglio. The Holy Spirit made him do it:

I picked up my pen to write, and I began. However, my hand was being moved by some greater spiritual force. The name on the ballot just happened. I had not yet narrowed my thinking down to one name; but it was done for me.

I wrote it, then trembled deeply. That's when I knew the Holy Spirit was fully working within the Church of Jesus Christ, and that my role was not to "select" the new Successor to Peter, but to "write down" his name--a name that had been given to me.


All I can say is, "Oh please, Cardinal, don't make yourself ridiculous." If what he says is true, it is more associated with the occult than the Holy Spirit. Read about "automatic writing" here.  Mahony's description links him to fake mystics like Vassula Ryden who claims to be God's stenographer with her hand guided by her guardian angel "Daniel," Jesus, and sometimes Yahweh. God does not work by casting spells over people and making their pens move automatically. If such a thing really happened, it makes me wonder who exactly was Mahony's spirit guide during the conclave.

After all the devastation he's inflicted on the Church in the United States, Cardinal Mahony should withdraw into dignified silence. Let's pray he does instead of publishing nonsense that makes him sound more like a rogue wizard from a Harry Potter novel rather than a prince of the Church.
Posted by Mary Ann Kreitzer at 12:20 AM

I hadn't thought of that, the 'spirit-writing' angle. Creepy.

Wasn't there something in there about the conclave electors being sworn to secrecy? Wasn't there some slight penalty for breaking that vow? Or am I being overly scrupulous on Cardinal Mahony's behalf?

As to secrecy, what secret of the conclave has Cardinal Mahony revealed? He hasn't even revealed for whom he voted, let alone what anyone else said or did.

I agree, Unknown, and said so here: http://canonlawblog.wordpress.com/2013/03/19/some-thoughts-on-conclave-leaks/

I love it. "...my role was not to 'select' the new Successor to Peter, but to 'write down' his name..." Thus leaving no doubt as to who he voted for, but preserving deniability. Smart man, that Cardinal Mahony.

(Not that it matters, Mr. Peters, but did canon law ever mandate that a cardinal elector’s oath gravely binds under penalty of law?)

I think that more charity should be shown to any man, but to talk in such a way about a cardinal archbishop is scandalous. Mahoney has made mistakes, yes, but to take a comment that is phrased weirdly, but can easily be interpreted in a sane and orthodox way, as something resembling occult practices is wrong. He is one of the heirs of the Apostles. He should be extended the benefit of the doubt when he is talks about how he viewed his role as a cardinal-elector.

And while he didn't say so, I can't help but think he wrote down "Cardinal Mahony!"

"Mistakes," Tom? That's like calling the actions of the pharisees toward Jesus mistakes. Cardinal Mahony has consistently attacked doctrines as Mother Angelica pointed out.

As for the cardinal's comment being "phrased wierdly," it wasn't wierdly phrased at all. It was clear as glass. He said his hand was "being moved" by a higher power outside himself. That seems very clear and specific to me. Who that power was, on the other hand, is up for speculation.

So once again,Cardinal Mahony blames another for the consequences of his actions

To me, this seems the His Eminence was just saying that he didn't exactly know why he wrote whatever name he did down, but he did it quickly, and it seemed like he was given assistance from the Holy Spirit in reaching this conclusion. That is a perfectly reasonable reading of what he said. Accusing him of occult practices is searching for something something that in all honesty is not a natural reading. I know plenty of people who use phrases like this and don't believe in occult practices, but are simply using the best language that they know how to express the idea that God was guiding them when they were in a stressful situation.

Also, it is the prerogative of the Roman Pontiff to correct a cardinal. Bl. John Paul II did not do so. Pope Emeritus Benedict XVI did not do so, and as of yet Pope Francis has not done so. I am not the biggest fan of the cardinal, but an attack on the Catholicity of a Cardinal of the Holy Roman Church who is in good standing with the Church of Rome is beyond the pale.

You interpret the Cardinal (and I agree that his office is entitled to respect) as saying no more than that "he didn't exactly know why he wrote whatever name he [wrote]", but that "he was given assistance from the Holy Spirit in reaching this conclusion".

What he actually said was "The name on the ballot just happened. I had not yet narrowed my thinking down to one name; but it was done for me."

According to this it was clearly involuntary and was certainly not the outcome of any kind of mental process whatever.