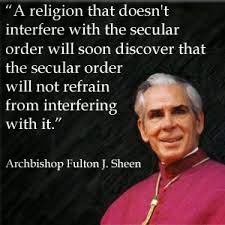 This Chesterton quote reminds me of Fulton Sheen's essay, A Plea for Intolerance:

Tolerance does not apply to truth or principles. About these things we must be intolerant, and for this kind of intolerance, so much needed to rouse us from sentimental gush, I make a plea. Intolerance of this kind is the foundation of all stability. [Read the complete essay here.]

Obviously, neither Chesterton nor Sheen was calling us to "curse" individuals. But we surely need to curse evil ideologies and actions and expose those who promote them. All sin is first conceived in the mind with evil ideas. Communism and Fascism didn't spring out of nowhere, but were first conceived by men who believed that individuals were expendable in advancing their evil philosophies. Mein Kampf and The Communist Manifesto were cover-to-cover evil. And there are plenty of diabolical philosophies floating around today as we see from the writings of men like Pete Singer and those who justify the murder of the innocent. There is nothing noble about the "I can't judge" cop-out. We are called to judge, not people, but actions. And some actions are so evil, they are diabolic.

N.B. Fulton Sheen and G.K. Chesterton were both wise truth tellers who were prophetic voices of the 20th century. Let us pray for them both to be raised to the honors of the altar. Fulton Sheen may be declared Blessed soon following the miracle of a stillborn infant who remained lifeless and without a heartbeat for over an hour while medical personnel worked on him. His mother just kept repeating in her mind, "Fulton Sheen, Fulton Sheen, Fulton Sheen." Today little James Fulton is a normal, healthy three-year-old.
Posted by Mary Ann Kreitzer at 6:56 PM

Starting with the Vicar of Christ, the Pope! He seems to prefer silence or vague, inexplicable comments now and then. Lord help us.

Hello, I was trying to see if I could get through. For awhile I could not.

Anyway, Happy St. Patrick's Day, and I hope Archbishop Sheen is soon canonized. His books and television program had a lot to do with my conversion.