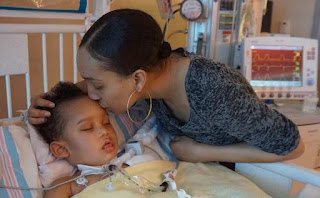 Life Legal Defense Foundation made Herculean efforts to save little Israel Stinson from forced death by the ghouls at Children's Hospital Los Angeles. The "city of angels" apparently harbors plenty of devils who see a brain damaged child as a burden to be eliminated as quickly as possible. Read what happened and then think of what doctors in the Third Reich did to the "imperfect" including children. In his book, A Sign for Cain, Frederic Wertham, MD describes how little ones were starved to death in a sterile hospital room with a "geranium in the window." Under the euthanasia program, doctors killed children with deformed ears or those with bed-wetting problems. Wertham writes:

The greatest mistake we can make is to assume or believe that there was a morally, medically, or socially legiitmate program and that all that was wrong was merely the excesses. There were no excesses. Rarely has a civil social action been planned, organized, and and carried through with such precision. It was no a "good" death, as the term "euthanasia" implies (from eu, "well," and thanatos, "death"), but a bad death; not a euthanasia but what may be called a dysthanasia....

The indications became wider and wider and eventually included as criteria "superfluous people," the unfit, the unproductive, and "useless eaters," misfits, undesirables. The over-all picture is best understood as the identification and elimination of the weak.

The euthanasia murders were never ordered by Hitler. The doctors and psychiatrists acted on their own:


They were not carrying out a death sentence pronounced by somebody else. They were the legislators who laid down the rules for deciding who was to die; they were the administrators who worked out the procedures, provided the patients and places, and decided the methods of killing; they pronounced a sentence of life or or death in every individual case; they were the executioners who carried the sentences out or -- without being coerced to do so -- surrendered their patients to be killed in other institutions; they supervised and often watched the slow deaths.

The evidence is very clear on this. The psychiatrists did not have to work in these hospitals; they did so voluntarily, were able to resign if they wished, and could refuse to do special tasks.

The perversion of the medical profession is very far advanced in this country. When most doctors are willing to perform or refer for abortion, offer assisted suicide, pull the plug on brain injured patients to "harvest" their organs, etc. what doctor will you trust to have your best interests at heart? And ask yourself whether your sick, handicapped, or ADHD child will survive in the years ahead as the price tag on life is marked "final clearance." The hour is late, the terrorists aren't limited to ISIS. Some of them are at Children's Hospital in Los Angeles where the motto on their website is "We treat kids better." What a joke! Isn't it ironic that little Israel got better care in the hospital of a third world nation where they valued his life. And isn't it pathetic that the arrogant doctors at CHLA ignored all the  medical evidence presented so they could kill Israel as quickly as possible. Pray for the family, but especially for the doctors who participated in this baby's murder. The same rationale used to kill him could be used for every debilitated person who needs skilled nursing care. Read A Sign for Cain. It's where we're headed!
Posted by Mary Ann Kreitzer at 6:30 AM