A Letter from Jail: Mary Wagner, Canadian Rescuer Whose Goal is to "Bring Love Where There is No Love." 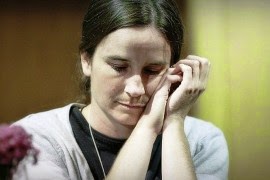 Have you heard of Mary Wagner? You should. Mary is a heroine of unborn babies many of whom are alive today because of her witness. Mary began the Red Rose Rescues. She goes into abortion mills with red roses, fetal baby models, and notes to the moms that include places they can receive help to continue their pregnancies. Her example, which includes several years spent in prison, is inspiring rescues here in the United States.


Most moms don't want to kill their children. Most women facing unexpected pregnancies feel panicked and, despite the mantra of "choice," don't think they have one. Many are being pushed and coerced by spouses, boyfriends, family members, and so-called friends. They suffer a continuous barrage of negative messages about how a baby will destroy their lives. Many panic.

And now, after a rescue in Toronto on December 8th, the feast of the Immaculate Conception, she is back in jail. Here's the letter she wrote to her supporters a few days later. 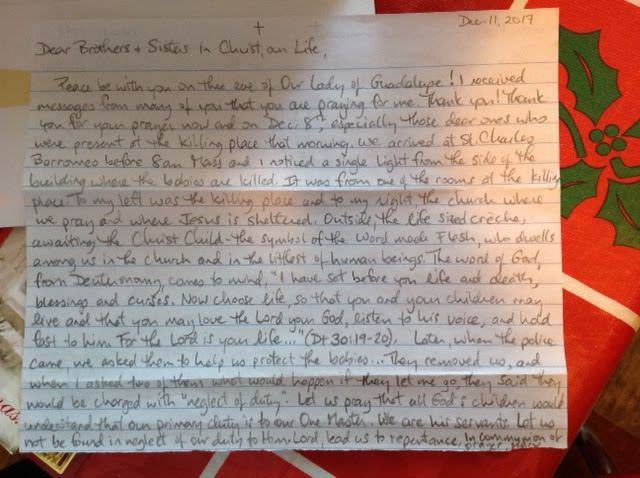 Consider that this young woman has spent YEARS in jail for offering help to moms at abortion mills waiting in line to kill their babies. Mary doesn't block the doors. She doesn't harangue the abortion workers. She does nothing but offer help to the mothers. That is defined as "doing mischief." The deliberate murder of a child is treated as a public good, while attempting to save their lives is "mischief."

This is the lie of the modern culture of death that kills the innocent and treats their murderers and the government officials who enable them as respected members of the community.

Listen to Mary witness to why she is willing to risk jail time for little ones in the womb: "to bring love where there is no love."

And see what she is now inspiring in the United States. Thank you, Mary. Pray for the rescuers, the little ones in danger of death, and for the mothers. These rescuers are the last line of defense for the babies.  Please pray for Mary and all those engaging in this life-saving work. And please pray that the Lord will call more of us to do it.


Years ago I agreed with rescues, but now society is so unstable that I believe such civil disobedience is not right. If the Red Rose approach is correct, then "gay" protesters entering St. Patrick's Cathedral and desecrating the Eucharist (as they did years ago and were arrested for) would also seem to be justified.

I don't understand your reasoning, sixlittlerabbits. The "gay" protesters are engaging in an illegal activity that is also immoral and violates the rights of others to legitimate rights, i.e., the practice of their faith.

The rescuers engage in what is technically illegal, trespassing, in order to protect the legitimate rights of the baby against the illegitimate right of the mother and the hired killers to commit legal homicide.

To compare these two things is faulty. Have you ever heard of the "defense of necessity?" It means that one may violate a lesser law in order to defend life or property. It is the law that protects a person who "trespasses" on his neighbor's property to protect the man's wife who is being beaten up. Whenever the necessity defense has been allowed to pro-lifers in court (rarely, but I was involved in such a case), the defendants have been found not guilty. There is absolutely NO necessity in the case of the blasphemy, desecration, and vandalism of a church.

I actually feel like we should all be rescuing. But most of us don't really believe the baby in the womb is equal to the rest of us even though each of us once was that baby.

Thank you for information about Mary. I invited Mary twice to Poland and organized about 100 meetings in Poland during which she talked about her ministry to unborn children in Canada. I run a page on facebook about Mary Wagner, where you can see many articles about Mary and many photos. I encourage...https://www.facebook.com/marywagnerpolsce/

Mary Ann, the Red Rose protesters are not committing a violent act, like the St. Patrick's activist homosexuals, but they are committing the illegal (note: not "technically" illegal) act of trespassing, which may result in a backlash against legitimate sidewalk counseling and pro-life witness outside abortion mills.

If someone were killing a child in your neighbor's front yard would you forbear to assist because trespassing on their property was illegal?

And why are counselors on the sidewalk "legitimate" while someone who goes inside to counsel isn't? Do you think St. Augustine or St. Thomas Aquinas would agree with you?

“An unjust law is no law at all”. St. Augustine

"He who in a case of necessity acts beside the letter of the law, does not judge the law; but of a particular case in which he sees that the letter of the law is not to be observed." St. Thomas Aquinas -- This is the basis of the necessity defense where one breaks a lesser law (trespassing) to prevent a greater evil (murder).