This Tells You All You Need to Know about the Apostolic Nuncio, Christophe Pierre... 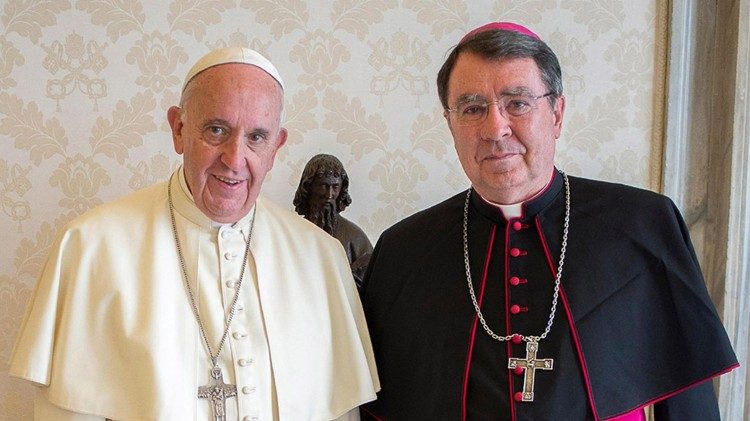 Yup! This tells you all you need to know about the nuncio. It also is one more indication of where Pope Francis stands who chose this man for our poor country. Archbishop Pierre received all the details about AUSCP's heresy (Association of U.S. Catholic Priests) several months ago. They promote married priests, women priests, priestless parishes run by laity, promotion of the LGBT agenda, etc. ad nauseum. Don't just trust the Lepanto Institute; check out their own website. Do you think the nuncio is ignorant of all this? If he is, he's irresponsible and unfit for his post. If he isn't ignorant, he's a wolf in sheep's clothing and unfit for his post.

Ah but the AUSCP holds dear the pope's favorite issues!  The group is a big proponent of fighting climate change and protecting the environment, their topic at their 2019 assembly focusing on Laudato Si. One environmental issue they ignore, however, is the dumping of little babies' bodies in sewers and landfills and septic tanks. Unborn children are apparently non-persons to this group who flaunt their concern for "social justice."

Hey...they care and want to end the death penalty and they favor gun control! (They even had a resolution introduced in 2018 to vow not to carry guns and be willing to throw themselves between an assailant and the bad guy with a gun.) Obviously, they know gun control won't stop the bad guys from having guns!

Oh... and they hate "white privilege"and want socialized medicine. What a group!

Sad to say, these are the men beloved by Francis. The men in cassocks who say the traditional Latin Mass (and their congregations) are regularly denounced as rigid and Pharisaical.

Don't let that bother you., friends Just double down in prayer and fasting for these poor, deluded clergy leading the sheep to slaughter. They need our prayers. From the looks of things, they aren't long for this world.


Compare the photo of the AUSCP to the 2017 ordinations for the FSSP below. Who owns the future? BTW the priest second from the left is Fr. James Buckley. I go on a five-day silent Ignatian retreat with him every year. How I look forward to the daily traditional Latin Mass, the reverence, and the silence -- and no computer! What a respite from the increasing insanity of our world.

Please protest to the nuncio about his participation with this faithless, heretical, scandalous group. The assembly is scheduled to take place in June so we still have the possibility of stopping the scandal. But even if we can't, there is a benefit in lifting up the rock and exposing the creepy crawlies underneath. The light of truth, the Son of God, is, like the sun, antiseptic.

Apostolic Nuncio of the United States

​Faithful American Catholics stand in the breach these days. We need to fight for our beloved Church, especially against the heretics in roman collars (or business casual). And if you would be so kind, please leave your message to the nuncio in the comment section.
Posted by Mary Ann Kreitzer at 6:00 AM

The persons in that photo reminds ABS of the once republican candidate for POTUS, Howard Phillips.

I am writing to ask you to cancel your appearance at the AUSCP 2020 Assembly. The AUSCP is an extremely dissident organization, and if you go it will cause great scandal and confusion among the lay faithful.

Please see this link for all the evidence needed, and pray about how you will explain supporting this to Our Lord at your particular judgement.

I am praying that you will rescind your offer to preside at Mass and preach at this event.

Sincerely yours in Christ,

There is more to be known about Pierre, especially in his close association to Saint Luke institute, gulag to good priests and launderer to bad ones.