And Do You Still Believe There Was No Fraud? Stop Getting Your News From the Biased Mainstream Media!

Too many people in this country have their fingers in their ears and sing "La-La-La-La-La...." whenever someone tries to wake them up to the fact that our country is being taken over by the communist socialist left. When their fingers are out of their ears, they turn to CNN, MSNBC, and Big Tech to get their "news." Really! You believe Chris Cuomo, Anderson Cooper, Don Lemon, Mark Zuckerberg, Jack Dorsey, and the View?
Well, folks, anyone with half a brain knows that the MSM is so biased, you can't trust anything they say. They are so embedded to their narrative that they censor anyone who questions their wicked agenda.
Are you one of the Facebook users who had a picture of Santa kneeling at the manger censored? I am. The photo was covered with black and "warned" viewers that the content was graphic or violent. Really? What do you think? 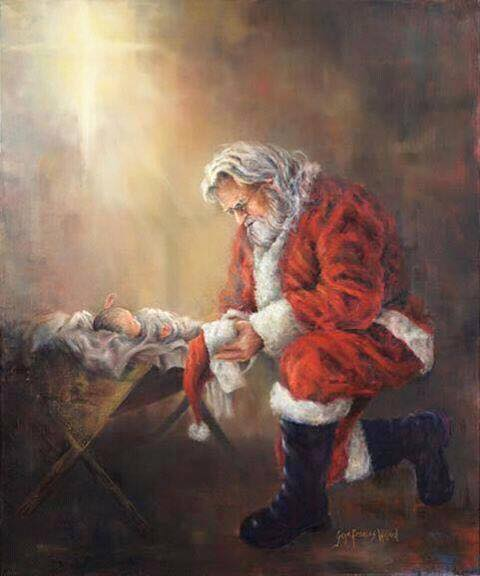 Does that look "violent" and "graphic" to you? These are the same folks who think littler girls "twerking" is cute. Be honest...these folks hate God. They hate the Word Made Flesh and the Word's image, the little babies in the womb, who, like St. John the Baptist, stretch and dance and smile and suck their thumbs as they wait to be born.
The left hates them as much as Herod did, and if Biden is sworn in come January Planned Parenthood will rejoice and more babies will die. All the protections put in place will be stripped. America will once again fund abortions in the Third World attaching aid to child killing. What an opportunity for the eugenics-loving left. As Ruth Bader Ginsburg said in an interview in the New York Times Magazine in 2009:

I had thought that at the time Roe was decided, there was concern about population growth and particularly growth in populations that we don’t want to have too many of. So that Roe was going to be then set up for Medicaid funding for abortion.

Take your fingers out of your ears, folks. Do you think the baby-hating left cares about you? Just take a look at the way they have happily devastated small business owners with their draconian rules. Look at the doxxing and death threats being leveled against any of the witnesses or election workers concerned about the integrity of the vote. Here's just a sample of what the left is doing to these people.

Carone is being ridiculed up one side and down the other over her testimony. But she's not the only witness to sign a sworn affidavit. Her lawyer presented numerous affidavits of other witnesses to vote irregularity in Michigan. I've read some of them and so can you at greatlakesjc.org. Keep in mind that this is only one state. This kind of thing happened in every swing state. But the mainstream media just keeps singing the same chorus -- NOTHING TO SEE HERE; MOVE ALONG.

Stop listening to the MSM. I heartily recommend The Epoch Times. I'm sending subscriptions to my children. You won't get the truth from the New York Times, The Washington Post, or Google. Stop using them! Subscribe to The Epoch Times. Oh...and you might take a trip to Project Veritas to see how radical leftists like Ilhan Omar win steal elections.

Meanwhile, keep praying for President Trump and for our country. If America goes down, if we become a pawn of China (loved by the left) there will no longer be any place to run. We will have become the country from which people want to flee. And what will you do then to protect your families?

Agree with every word. We need regular Americans to do their part. Share the information, try to wake others up, and what about a movement of Americans to put up signs in their local area to try to warn the public and let them know what's going on? Imagine people putting up signs on overpasses and roadways.
We cannot let this election be stolen. If this happens, our nation will have been destroyed. There is no "next election". This is unlike any other election and the other side is so bold now, they are out in the open, sure they have stolen this election. There will be no opportunity to protest this once it's done.
God be with President Trump and those who help him.

It’s never over, until it’s over. Satan thought he had won on Good Friday.
Keep praying - especially the Holy Rosary - that the fraudulent election results be overturned.
Rosemary Therese Reid

PS For a short period of time, one can subscribe to the on-line version of the The Epoch Times for
one dollar($1.00) for four months.