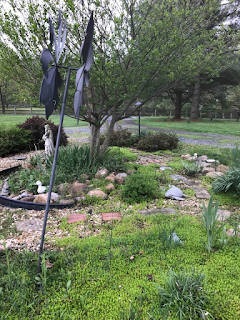 Tuptim is helping Topsy work on her Spring garden cleanup. They rake and weed and begin to set the hardy pansies in the circle garden out front.

Topsy: [brushing her hair back from her forehead with her forearm...] Whew, it's getting warm. You know when I lived in the city, gardening was a snap. We had a quarter of an acre and I had a few little areas: my Mary garden, my lily garden, a small vegetable garden. Here [makes sweeping gesture with her arm...] gardening is a black hole. If I ever win the lottery, I'm hiring a full time gardener.

Tuptim: [Laughing....] Only one problem....You have to buy tickets.

Topsy: Well, I don't really want to win the lottery anyway. You see how many people's lives are ruined by all that money. And who knows what it would do to me? I don't want the temptation! My sister won $50,000 once. I think after taxes she got about $37,000. She gave money to her kids and she's been fixing up her kitchen, but she does most of the work herself. She's really talented at doing just about any kind of home improvement.

Tuptim: Wow! That must have been a fun surprise for her.

Topsy: It was. Wouldn't it be nice if just getting a windfall would solve all your problems. A lot of times it just adds more. I feel like we're living in the Twilight Zone lately. One of the reasons I work in the garden is just to feel a little normal. Digging in the dirt, smelling new mown grass, hearing the birds singing....those are things that drive away the Twilight Zone music for at least a little while. And it gives me moments of awe. [She moves back some weeds to reveal a perfect little perfect crocus peeping up through the dirt...] Isn't that beautiful? And just wait until the snowball tree blooms. The bees will be making music as they collect its nectar.

Tuptim: [Thoughtfully...] We do live in a Twilight Zone world these days. [Laughing....] Oh! Oh! Hey, Topsy, you know the "You might be a redneck jokes?" How about while we work we make a list of -- "You might just live in the Twilight Zone litany." I'll start....hmmm....Ah! [giving the thumbs up sign]:

If you think boys can be girls and girls can be boys.....you might just live in the Twilight Zone.

If you think starving and abusing animals is a moral abomination that should be legally prosecuted, but approve of ripping arms and legs off little babies and starving patients in persistent vegetative state...you might just live in the Twilight Zone.

Topsy: [leaning on her shovel thinking....] Got one:

If you think protesting at the Capitol is an insurrection, but are all in favor of BLM and Antifa murdering people while they loot and burn businesses and federal property....you might just live in the Twilight Zone.

Tuptim: If you think same-sex marriage is beautiful, but think big families are disgusting....you might just live in the Twilight Zone.

Topsy: If you're an environmental extremist who wants to end fossil fuels but are a super consumer of electricity, not only are you a hypocrite....you might just live in the Twilight Zone.

Tuptim: Here's a ridiculous one about a pet peeve of mine:

If you pay big buck for ripped clothes and call it a great fashion statement....you might just live in the Twilight Zone.

Topsy: If you have no problem going to the movies or the mall or restaurants, but won't risk going to church because of the Wuhan virus....you might just live in the Twilight Zone.

Tuptim: If you call yourself a "devout Catholic" while you endorse abortion, same sex marriage, and other intrinsic moral evils condemned by the Church....you might just live in the Twilight Zone.

Topsy: [picking up her clippers...] I think we can say it's official. We live in a culture of the Twilight Zone. And those of us who are still sane need to keep pointing it out while we refuse to drink the Kool-Aid. [Handing Tuptim a box of flowers....] Back to work, Lady. Plant these around the Mary statue. I'll plant mine around St. Joseph. Let's say a few Hail Mary's for our poor country while we do it.

Tuptim: Amen to that!