How Do We Keep Our Children Catholic? Give them Heroes! 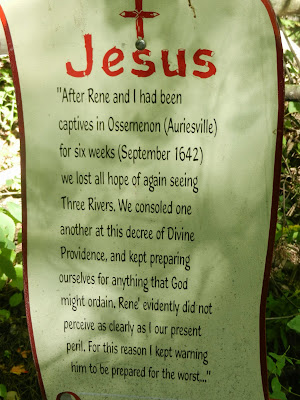 I think there are many approaches to this question. Think of how Jesus taught in a way to capture the hearts and minds of those who followed Him. He told stories.

Stories capture the mind and heart. And not just fictional stories. Some of the most compelling stories are true. When I taught fourth grade, my students loved to hear stories of the saints. The boys especially loved the most gruesome stories of the martyrs. Was it because they were a bloodthirsty lot? I don't think so. I think boys want to hear about those who are bold, heroic, and defend others. Horatius at the bridge is a compelling secular story that presents a hero. Saints are heroes and heroines. And so we should tell our children stories about them.

St. Isaac Jogues lived among the Indians, facing death at almost every moment. The least thing could change the superstitious Indians from friends to enemies and their jealous medicine men used the "blackrobes" as scapegoats when tragedy struck. One of most exciting things about these Jesuit martyrs is that we have their own words describing what they experienced. Fr. Jogues described the death of his lay associate Rene Goupil who was murdered because he made the sign of the cross on the head of a child. Two braves attacked him with tomahawks as he and Fr. Jogues walked in a ravine praying the rosary. For some reason they did not kill Fr. Jogues, but he held Rene in his arms as he died with the name of Jesus on his lips. I believe Kateri Tekawitha, born a decade later, was the fruit of the Jesuit martyrs' sacrifice. The lily of the Mohawks also suffered for the faith, a kind of white martyrdom.

Read stories of the saints and tell them to your children: in the car, on walks, at bedtime. Give them real superheroes! And with Halloween coming, why not dress them up as little saints.
Posted by Mary Ann Kreitzer at 9:33 PM