Matthew Shephard and the Big Lie 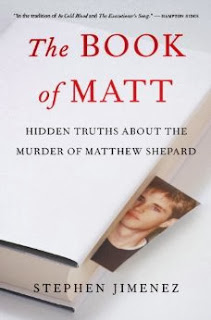 After Matthew Shephard was brutally murdered in 1998, the homosexual community raised him up as an icon illustrating the horrible impact of homophobia. National media and the gay community relentlessly beat the hate crime drum using the murder as a crisis not to be wasted. Shephard was lionized in The Laramie Project, a play named for the locale where the murder occurred. The play's message? Tolerance and acceptance of homosexuals (and the homosexual lifestyle)  is the only approach that can turn our hopelessly evil, intolerant, hateful, homophobic culture around.

There's only one problem with the entire Matthew Shepard story. It's a fairy tale, mostly fiction! And now an award winning reporter has exposed the truth in The Book of Matt. Shepard wasn't killed by evil homophobic heterosexuals. In fact one of the killers was a sometimes sex partner and fellow meth user. Here's what a gay journalist wrote recently about the book:


As gay journalist Aaron Hicklin, writing in The Advocate asks, “How do people sold on one version of history react to being told that the facts are slippery --- that thinking of Shepard’s murder as a hate crime does not mean it was a hate crime? And how does it color our understanding of such a crime if the perpetrator and victim not only knew each other but also had sex together, bought drugs from one another, and partied together?"

Indeed, will the truth make a difference? The Matthew Shepard foundation is already attacking the messenger. I haven't read the book yet, but I expect it's true because the story fits the profile of the self-destructive lifestyle of homosexual men, especially young men. Even gays admit that homosexuality is a "sewer" of casual, degrading sex and drug use including crystal meth.

Today's Gospel reading was the parable of the prodigal son. Matthew Shepard's murder cut short his life and the opportunity to reform and turn back to God. Let's pray that in the final hours before he died, he saw the face of Christ and reached out for Him. Our God is so merciful and wants no one to parish. St. Faustina, Apostle of Divine Mercy, pray for Matthew and for his murderers.
Posted by Mary Ann Kreitzer at 8:35 PM

Thank you for this. The truth was (somewhat) known some years ago, but one had to really dig for it. If I remember correctly, the main motive for the murder was robbery.