The media loves to take the pope's words, twist them, spin them and fling them out backwards. His statement a few days ago about the Catholic faith not being only about abortion, same-sex marriage, and contraception has been turned into the pope dismissing these evils. Planned Parenthood even had the audacity to thank the pope in the name of "pro-choice women everywhere!"

But addressing Catholic doctors on Friday, the pope made it clear he stands with the Church on respect for the unborn. "Every unborn child, though unjustly condemned to be aborted, has the face of the Lord, who even before his birth, and then as soon as he was born, experienced the rejection of the world." The pope certainly wasn't sending a message of approval for sexual immorality. What he did was emphasize that Christ's message is about more than sexual immorality. And I agree. 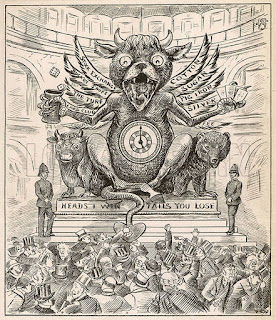 There are many moral evils not being discussed in our churches and a BIG ONE is USURY! The Bible doesn't say the root of all evils is adultery or sodomy or fornication or prostitution. It says LOVE OF MONEY is the root of all evils. Jesus didn't say a man has to choose between God and his mistress or between God and his gay lover. No, he has to choose between God and Mammon. Does that mean Our Lord approves of fornication, adultery, and sodomy? Of course not! It does mean that greed is a primary motivator of men, one which leads them to treat their neighbors as commodities for their increasing wealth.

And that is a message that G.K. Chesterton discusses in the one book that has been described as "Chesterton in a rage!" The book? Utopia of Usurers  condemns unbridled capitalism that seeks to enrich the few by enslaving the many. When you look at the bailing out of rich bankers at the expense of taxpayers while their CEOs retire with golden parachutes even as the institutions fail you readily see the worship of Mammon in the U.S. Chesterton certainly recognized it in Britain and was especially enraged by the dehumanizing exploitation of the many by the few. (Certainly, the murder of the unborn is a perfect example of enriching the acolytes of Mammon by a barbaric and dehumanizing greed!)

Usury is just one example of a grave moral evil that has received too little attention in our churches, perhaps because so many of the "princes of the Church" are among the worshipers of Mammon. Let us pray, like St. Ignatius urges in the Spiritual Exercises, not only for spiritual poverty, but physical poverty if the Lord wills it.

May we never prefer to serve Mammon rather than Our Lord and Savior who was so poor He had no place to lay His head.
Posted by Mary Ann Kreitzer at 10:59 PM

I heard an excellent homily on that very topic tonight at Mass. Thank you for mentioning it again! I seem to recall that depriving a worker of a just wage is one of the four sins that cries to Heaven for vengeance.