Did You Ever Hear Anyone Call William and Kate's Baby the "Royal Fetus?" 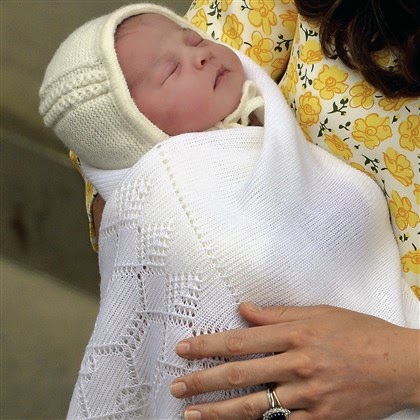 Well, the royal baby has a name, quite a moniker for a tiny tot. She is Charlotte Elizabeth Diana, reflecting three generations: her great grandmother Elizabeth, her grandmother Diana and grandfather Charles, and her own precious, unique self.

Since our own new baby born in April is Charlie I feel a special kinship with the royal couple. And Charlie is definitely a little prince in his family. The name means "free man," somewhat ironic in this age when all of our children and grandchildren are wage slaves to debtor governments. Let us pray they are never slaves of an anti-Christian government intent on persecution like the poor Christians under Islam.

What a joy it is to think that while we engaged in the "baby watch," the entire world acknowledged that the little person growing in Kate's womb was a baby. Did you ever hear anyone talking about the "royal fetus?"

Here's a good article on the royal birth, but the author gets one thing wrong. Charlotte is not third in line to the throne. Her big brother has that honor.
Posted by Mary Ann Kreitzer at 3:42 PM