The Historic Meeting between Pope Francis and Patriarch Kirill 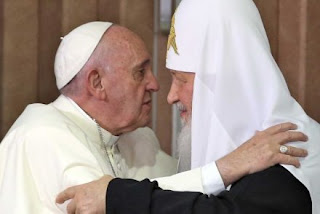 But I'm a little confused about this being the first.

And, of course, on the 50th anniversary of the above meeting, Pope Francis met with Patriarch Bartholomew in Jerusalem.

Let us pray for the reunion of all Christians, but for a true unity not a band-aid that has smile faces on the outside, but covers up serious doctrinal divisions underneath. (Dare I say, like the Lutheran-Catholic meeting coming up in October?)
Posted by Mary Ann Kreitzer at 10:09 AM

The Orthodox and the Lutherens are not comparable.The Orthodox Church is considered a "sister church" with valid sacraments and a valid Liturgy.
Orthodox are highly traditional and will require Rome to sign a mutual declaration of the same. Of course a known former KGB Marxist like Kirill, might go along with it but branches of the autocephalus Orthodox definitely will not. Bartholomew, as head of the Greek Orthodox Church might however, he is receiving lots of push back against this. There are elderly monks in a monastery of Mt Ahthos who have been persecuted for years because they are against this ecumenism.
Kirill belongs to the WCC. A very ominous sign.
https://www.youtube.com/watch?v=j9JOOJPDuEc

Of interest to blog readers, James Hitchcock wrote a fine book titled "History of the Catholic Church." There's a whole chapter about the excommunications of 1054 and the final split between the East and West in the 14th century. Another resource is "101 Questions & Answers on Eastern Catholic Churches" by Edward Faulk who's a bi-ritual deacon. Both of these books helped me "get" what really happened.

With Castro looking on, and the location of this historic meeting taking place in an oppressive communist country, I hardly feel confident that this is a good thing. Suspicious is how I can most optimistically describe my impression. How many Cuban opponents to the communist regime tried to see Francis when he visited their country but were dragged away? Did Francis speak out for their concern and safety? No. Did he meet with the Women in White, whose loved ones have disappeared because they opposed communist dictators? No again. Let us pray for this pope who does not seem to recognize danger where it genuinely is and continues to criticize those watchmen trying to sound the alarm.

I'll take a stab at this.

Among the Orthodox, Russia was the worst about any communication with Rome - ancient history with religious wars and pogroms against Roman-ists. Can't think of details right off the bat - but it is a bitter history. Czarist Russia never liked the Poles and I think since WWII the Russians harbor hard feelings against Germans. Hence their rejection of JPII and Benedict XVI's efforts at reunion. Throughout history some Russians called the Catholic Church the Whore of Babylon. Russia's monarchy and the Church were pretty much one entity - hence the political ramifications down to our day.

The Russian have been a major obstacle to unity of the Orthodox with Rome. The Patriarchs are equals, the Patriarch of Constantinople might be the first among equals. Not sure how they term it. There is a Coptic pope as well - all part of the Orthodox communion.

For me, this encounter signals a sort of confirmation of Our Lady's promises at Fatima - that Russia would be converted - and the document seems to verify that since it speaks of the extraordinary growth of Christendom since the Soviet collapse. The Patriarch requested the meeting be held in Cuba to break from the old world conflicts which prevented these steps toward union in the past. Of course Fatima devotees who do not believe the Vatican statements concerning the Consecration by JPII will disagree and find something wrong with that notion - but they pretty much have rejected everything the popes have done regarding Fatima anyway. Unfortunately they have lost confidence in the papacy.

I realized after I wrote my comment that I made a mistake. The final split between the churches of the East and West was in the 15th century. My apologies!

Sadly, very few Catholics I know are aware of the impetus for, and the consequences of, the Fourth Crusade. Also, there is a commonly held Russian Orthodox prophecy that foretells an 8th Ecumenical Council will be called that will condemn Freemasonry by all it's organizational names.

Presently, the Orthodox only believe in the validity of the first 7 ecumenical councils since both East and West were not represented in their original Christian Church Umity.