The Oregon Standoff and Its Connection to the Clintons... 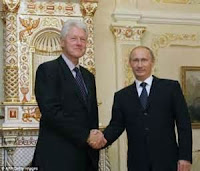 Maybe This Is a Lot Bigger than People Think.

Even the New York Times got into the act reporting on it. Was Bill's $500,000 payoff for a Moscow speech all about brokering the deal to get uranium for the Russians? Read more here.

Check out how they are hammering the ranchers. Is the purpose to force them to sell their land? The federal government is corrupt. Americans need to study the Constitution, stand up for it, and defend the rights of those being persecuted. This all reminds me of an old movie called McCabe and Mrs. Miller with Warren Beatty and Julie Christie (and the feds in the role of the hired killers). Yup, the federal government is as corrupt as can be and we need honest local officials and sheriffs to stand up to these thugs! We also need honest federal law enforcement officers to say, "Enough is enough!" and refuse to cooperate in attacking American citizens.

You can visit Sheriff Mack's organization, The Constitutional Sheriffs and Peace Officers Association (CSPOA) at cspoa.org.

How big is this and how much will we find out and how many more lives will be lost? If Planned Parenthood will kill a baby for a few hundred dollars, how many will happily kill some ranchers standing in the way of millions?