Looking for Brave Bishops who Speak the Truth in Love!

Supposing you meet a friend who tells you he is driving to the mountains on a road you know well.
There is a section of the road around a blind curve that runs along a cliff. You know that the road was washed out in a recent storm. Several people have driven up the cliff road only to end their days plunging off the edge and onto the rocks below. The police have put warnings along the road, but someone keeps taking them down and puts up signs about the wonderful views from the top of the mountain. They obviously have a macabre sense of humor because the last sign before the curve is "Welcome to heaven."

Tell me, would it be an act of charity to say to your friend, "That really is a lovely mountain and the views are stupendous. Have a great time!" Everything you said is the truth, but you left out an important piece of information. Would you console yourself later after your friend takes the plunge by saying, "Well...everything I said was true?


We live in times when many of those in Roman collars speak only pleasant truths of the faith. They talk about loving your neighbor and doing good. But no unpleasant truth ever passes their lips. You never hear the words "hell" or "judgment" or "repentance" unless they are talking about illegal immigration or climate change. They don't want to be "divisive" ignoring Jesus' words that he came to divide -- the sheep from the goats -- those who follow the Lord from those who embrace the Father of Lies.

I thought of all this today when I read Fr. George Rutler's column on The Menadicity of Public Officials. As usual it is a masterpiece of clarity and truth. He specifically addressed the junior senator from New York, Kirsten Gillibrand who tells everyone how serious she is about her Catholic faith while treating Catholic truth with contempt. Fr. Rutler expresses it well:


While experience cautions theologians against the quicksand of politics, politicians frequently rush into theological matters where angels fear to tread, as Senator Gillibrand did on May 29 in a broadcast on National Public Radio. She announced that the Church is wrong about abortion, same-sex “marriage,” and the male priesthood. This puts her at odds with all the saints and doctors of the Church, and Jesus Christ....Nevertheless, she seems certain that the Church’s teaching on essential dogmas are quixotic, as she put it: “And I don’t think they’re supported by the Gospel or the Bible in any way. I just—I don’t see it, and I go to two Bible studies a week. I take my faith really seriously.”...

This mendacity became bolder on June 2 in a televised Fox News “town hall” forum when she said that “infanticide doesn’t exist.” Thus she ignored the “late-term” abortion bill signed by Governor Cuomo on January 22, as he sat next to a smiling Sarah Weddington, counsel to the lying, and later repentant, plaintiff in the Roe v. Wade case.... The Governor of Virginia, Ralph Northam, who knows what he is talking about as a pediatric neurologist, admitted with insouciance: “If a mother is in labor, I can tell you exactly what would happen. The infant would be delivered. The infant would be kept comfortable. The infant would be resuscitated if that’s what the mother and the family desired. And then a discussion would ensue between the physicians and the mother.”
Like a rhetorical Houdini breaking free from the shackles of consistency, Gillibrand then defended a woman’s “right to make a life and death decision.” But if the unborn is not human and if nothing is killed, why speak of a need to decide between life and death? There is little difference between a slip of the tongue and a slip of the scalpel. Gillibrand’s incoherence is not a mistake the Holy Spirit would have made, but her solecism does reek of the Father of Lies.

And, of course, Gillibrand shares company with many other "Catholic" politicians. My own Virginia junior senator, Tim Kaine, wears his Catholic faith on his sleeve boring all listeners with tales of his Jesuit education while he champions the murder of God's least ones and the LGBTQ agenda.

Meanwhile, few of our religious leaders challenge these Catholics or call them to account. Goodness, who wants to experience the backlash that pummeled Bishop Tobin of Providence recently?  And so we must turn to voices like Fr. Rutler to find the truth and pray for him. 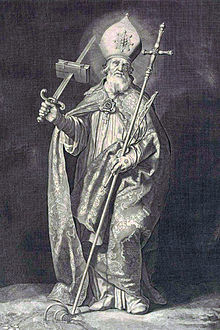 Today we celebrate the feast of St. Boniface, bishop and martyr. The first reading from St. Paul testified to the situation faced by this holy man and by us today:


Keep watch over yourselves and over the whole flock of which the Holy Spirit has appointed you overseers, in which you tend the Church of God that he acquired with his own Blood. I know that after my departure savage wolves will come among you, and they will not spare the flock. And from your own group, men will come forward perverting the truth to draw the disciples away after them. So be vigilant.

Sadly, many bishops today would rather welcome the savage wolves into the fold than face the criticism of the secular world. They fear the media more than they fear Almighty God. In view of that we really need to acknowledge and thank those bishops and priest who face calumny and slander for bearing witness to the truth. Think of the impact if all of us who love the faith sent one thank you letter every week to a priest or bishop who had the courage, like St. Boniface, to face an immoral clergy and a pagan world. Bent on reform, Boniface led five councils to reinvigorate the German Church. Is it too much to ask our U.S. bishops to act like they believe what the Church teaches?

Let us pray to St. Boniface to intercede for our bishops, many of whom would rather be silent about the evils we're facing and let the faithful plunge to spiritual death on the road to hell rather than risk loss of the world's good opinion.