The Bus, The Bollard, and The Blessed Mother


We returned last week from our Pilgrimage to Italy with a small group from our parish, including our pastor, Fr. Dennis Kleinmann.  Three things in particular that we witnessed will forever stand out as the most remarkable memories of the trip.

The first involves our tour bus, which was a normal European touring coach, our excellent driver, and our wonderful tour guide, Marco.
We left our hotel early on Sunday morning with strict orders from Marco who said, “BE ON TIME because we have a very tight schedule to keep and if we are even a little bit late, there could be problems or we might even  have to cancel part of the itinerary for the day.”

Throughout this trip we came to know some of the unique methods used by Italy to curb, restrict, control, and otherwise manage traffic flow and congestion.  Sometimes it was a sign with a particular type of truck or coach with a slanted line through it.  Sometimes it was a toll station where only certain types had to pull over and pay a fee to proceed.  This particular day it was something totally unexpected, not just to us, but our driver as well.

Between our hotel and our next destination there was a bridge to cross and on certain days of the week ONLY car traffic is allowed.  Sunday just happened to be one of those days, but this rule had only just been instituted on the road we were traveling.  Our driver and our guide said the last trip they took with a previous group going this way had no problem.

To insure that the restriction is observed, lanes are reconfigured on each end of the restricted area.  Where the road along the way is two lanes of opposing traffic,  the road changes to three lanes to manage the restriction.  The one on the right is wide enough for small cars and so is the lane on the left which is used by oncoming traffic.  The lane in the middle is wide enough for buses and large trucks and vans which use it on all non restricted days to pass through and then continue in the proper lane of the ongoing two lane road.  On the days when no bus or truck is allowed to go, a bollard comes up from the ground over which no one can pass.  The police have a remote control device to work the bollard and keep things on schedule.

When we came to the first such triple lane layout the bollard was down and over it we went with no problem.   We crossed a bridge and approached the second triple lane setup where to our driver’s surprise and our guide’s dismay, the bollard was up!  IF it is a restricted time period, then bollards at each end of the restricted area, in this case, over the bridge, SHOULD HAVE been UP, but the first one was not.  And as this was a narrow road in the first place, there was NO way to turn the bus around.  We had two choices.  Get the bollard down, or back up all the way across a long bridge.  Yikes!

There was a lot of hand waving and a lot of frustrated language being exchanged between the driver and the guide who was on the phone immediately with the Italian police.  Their comment was “this is a restricted day and if the bollard is up you cannot pass.”

“You don’t understand,” Marco told them.  “We passed over the first one and we are on the other side of the bridge and can’t go forward and can’t turn around!!!”

“This is election day,” he was told by the policeman on the phone.  “We are all busy.  All the police are at the polls helping with elections.  No one can come soon to help you.”

Well if no one was coming soon then we were even more late to the church and if we were much later we would also be late to our lunch, scheduled and arranged for us at a restaurant near the church.  The driver was concerned for the bus.  The guide was concerned for us and the schedule he was hired to keep.  We were stranded and the people in all the cars, who stared at our situation as rubber-neckers will do, caused a long line of cars to pile up. 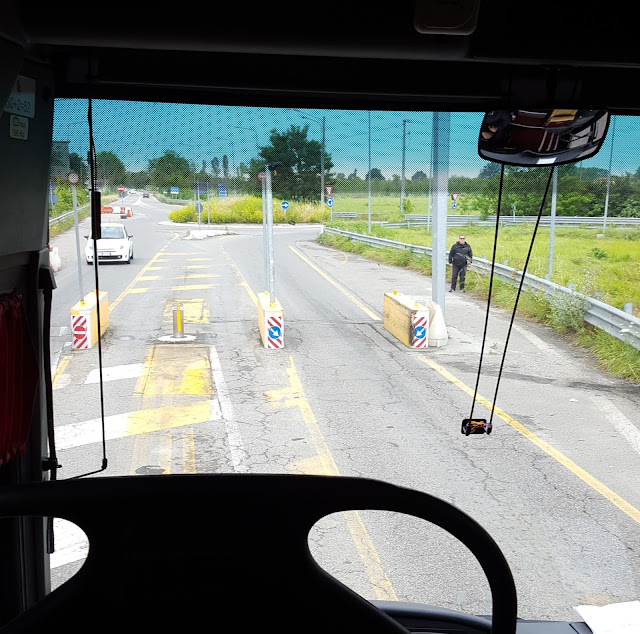 Desperate to try anything, the driver and the guide decided to “just try for the heck of it” to see if our bus would in fact fit even barely through the car lane.  You know, squeak through.  It was worth a try.  So he backed up the bus and moved to the lane on the right and eased forward with two men on the outside giving him hand signal directions to move or stop.  The bus would not fit.  The lane barriers were not even close to being far enough apart.  Marco is now beside himself, and the driver is thinking, I’m sure, “Ay yi yi yi yi yi!”

Someone in our group came to the front of the bus and spoke to Fr. Kleinmann, suggesting we pray an emergency novena.  Everyone on the bus agreed with the idea.  So with microphone in hand Father led us in 10 Memorare’s to the Blessed Mother----nine in petition, and the tenth in gratitude for an anticipated answer to prayer.


“Remember, O most gracious Virgin Mary, that never was it known that anyone who fled to thy protection, implored they help, or sought they intercession, was left unaided.


Inspired with this confidence, we fly unto thee, O Virgin of Virgins my Mother; to thee do we come; before thee we stand, sinful and sorrowful;


O Mother of the Word Incarnate, despise not our petitions, but in thy mercy hear and answer us.  Amen.”

As we prayed cars continued to pass by.  Some stopped to ask about the problem, but could offer no help other than to advise us to call the police, which Marco had already done to no avail.  Most just stared and shook their heads. 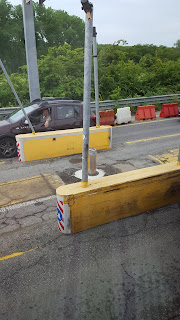 Literally, within seconds of us finishing the tenth prayer, a car pulled up directly in front of our bus and a man got out and spoke to Marco.  It seems he was a local fireman, who happened to have one of the remote control gadgets in his car that raises and lowers the bollard.  (Fire trucks would naturally need to have access to the road no matter what day of the week or time of day it is, but it was curious that he happened by on a Sunday morning right when we needed him.)

After a brief explanation of our dilemma by the driver, he kindly held out the remote and down went the obstruction.  Hooray!  And thanks be to Our Mother, the Blessed Virgin Mary for coming to our rescue.  We were really late by then, enough to alter our plans and go directly to the restaurant for lunch first.  Marco begged another time slot at the church later in the afternoon for mass.
The day was saved, the itinerary was kept, more pasta was eaten, more wine was drunk, prayers were offered up, and we arrived safe and sound that evening at our next hotel for another delightful two night’s stay.
Posted by Chriss Rainey at 7:00 AM

What a wonderful story!! Brought tears to my eyes. Thank you!