For Islam to be true, God would have to be mutable

Could those who blindly follow Muhammad as their heaven-sent prophet and leader and adhere to Islam as the one divinely revealed religion and the only true way to salvation possibly be deceived by Satan? The answer is yes. (Listen up, Francis.)

City Journal published an article by Theodore Dalrymple (pen name of Dr Anthony Daniels) titled When Islam Breaks Down. Dalrymple said, “No Muslim in an Islamic society would dare to suggest that the Quran was not divinely dictated through the mouth of the Prophet but rather was a compilation of a charismatic man’s words, and incorporating, with no very great originality, Judaic, Christian, and Zoroastrian elements.” He is correct. No Muslim in an Islamic society would dare say that because he would be killed.So let me tell you the mostly unspoken story of the origin of Islam and point out that for Islam to be true, God would have to be fickle...changeable, capricious, mutable.

In 610 AD Muhammad retired with his family during the month of Ramadan to the famous cave on Mount Hira, and there, after spending time in pious exercises and meditations, he announced the secret of his mission to his wife, Khadija, revealing that the Angel Gabriel had just appeared to him and had told him that he had been appointed the “Apostle of God”. However, who was this “Archangel Gabriel”?

Apparently Muhammad's Angel Gabriel was a huge vision looming in the sky with its feet on the horizon who enveloped Muhammad in a terrifying embrace, strangling him so that he felt as if his breath was being forced from his body. It was not until the third time the “angel” strangled Muhammad, demanding he recite words, that he finally did so.

Alfred Guillaume’s 2002 translation of Ibn Ishaq’s Sirat Rasul Allah – The Life of Muhammad, Oxford University Press, 1955, says of Muhammad’s encounter with Gabriel: “Gabriel came to me while I was asleep, with a coverlet of brocade whereupon was some writing, and said, ‘Read!’ I said, ‘What shall I read?’ He pressed me with the book so tightly that I thought it was death.” Three times Gabriel pressed the book down on Muhammad’s chest until Muhammad had no breath left. Finally, Muhammad said, “So I read it, and Gabriel departed from me.”

After Muhammad’s terrifying and violent encounter with the spirit in the cave, he believed that a jinn (genie or demon) possessed him. In addition, not only Muhammad suspected a demonic source of his revelations, but also many of his contemporaries believed his revelatory experiences were demonic and he was demon possessed: “Yet they run away from him and say: A man possessed!” (Sura 44:14; Yusuf Ali) and “What! Shall we give up our gods for the sake of a poet possessed?” (Sura 37:36; Yusuf Ali).

From that time the so-called revelations from Gabriel to Muhammad began to follow one after another in rapid succession. It is said that during the moments of these revelations with Gabriel it was a painful sight to behold the nervousness of Muhammad’s features, the distortion of his countenance and the anxiety of mind portrayed on his face. He would sometimes swoon and collapse to the ground, and even on the coldest day his forehead would be beaded with sweat. His epileptic fits, which had begun at the age of five, now greatly increased during his spiritual struggles on account of his mental excitement and nightly visions. Menezes says that as a result, many scholars have become convinced that Muhammad was either epileptic, or demon possessed or both.

Refuting the whitewashed, peaceful Muhammad of politically correct myth, Joel Richardson in his Islamic Antichrist, published by WND Books, 2008, says, “When attempting to discern the primary spiritual source of Islam, it is essential to see not only the dark nature of the initial seed but even more so its ultimate vision for the future – its fully mature fruit – as the demonic anti-biblical revelations that began in the Cave of Hira find their culmination with the killing of every Jew, Christian, and other non-Muslim in the world.”

Muhammad’s terrifying encounter stands in stark contrast to the gentle nature of angelic and divine encounters found throughout the Bible where angels almost always begin conversation with man with the comforting phrase, “Do not be afraid,” as the genuine St. Gabriel the Archangel did when speaking to the Blessed Mother at the Annunciation.

One year before the six 1917 apparitions of Our Lady of Fatima in Portugal, the three shepherd children, Lucia dos Santos and her cousins Francisco and Jacinta Marto, saw the Angel of Portugal, also known as the Angel of Peace, who appeared to the children three times, taught them prayers and how to adore Our Lord. During the third visit, the angel administered Holy Communion to the children. At the time Lucia was nine years old, Francisco was eight and Jacinta six. The three young children were not afraid of the angel, yet Muhammad, a 40 year-old married man, was terrified of the angel he encountered. 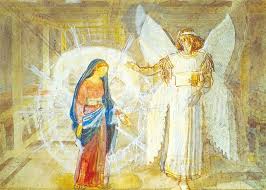 ...this, because it's impossible for both to have come from God.
Would God, Who is immutable, send St Gabriel the Archangel to the Blessed Mother to announce the birth of His Son, Jesus Christ, then change His mind 600 years later, and resend Gabriel to earth to Muhammad as His supreme prophet to announce a new religion to supersede Christianity, thereby implying that Christ’s redeeming death on the Cross was incomplete? The answer is, no, God would not and did not rethink His salvation plan and send Gabriel to Muhammad to declare that he (Muhammad) was to start a new religion because Christianity just was not working out as first designed at the foundation of the world.

If Muhammad’s “Gabriel” is not the real St Gabriel the Archangel, then who is he? Angels are real, and exist in the transcendent world of eternity. Satan is an angel, now categorized as a demon, with angelic powers and therefore can reveal himself to humans in various forms. Was Muhammad’s Gabriel then Satan in disguise? If Allah, Muhammad’s “Gabriel” and Satan are one and the same, a sort of unholy trinity of hate, then Allah is a fallen angel, Satan himself, who needs to be worshiped in all his attributes of hatred, killing, destruction and death.

Since Christ founded Christianity in order to populate Heaven, why would the devil not think that he also must have an opposite religion, not only to thwart God’s plan, but also to populate hell?

On a mountain Satan showed all the kingdoms of the world to Christ and said that they would be His if Christ would kneel down and worship him. Christ did not submit, so Satan withdrew until another day when, on another mountain, disguised as Gabriel, he offered Muhammad domination of all the kingdoms of the world through Islam if only he (Satan) would be worshiped as Allah. The terrified Muhammad submitted and in doing so was deceived by Satan. Remember that the Arabic translation for the world “Islam” is “submission”.

Moral of the story: If I can figure this out, why can't Francis?

Help me. Did Francis identify Muhammed's "Gabriel" with the real angel? Nothing would surprise me, coming from his mouth.

Who is this Francis character?
I know of an usurper fellow named Bergoglio who has allowed Christian participation in paganism at the Vatican and who recently went to an ancient unholy temple in Iran and babbled prayers to demons. But a Pope named Francis - I know not of such a fellow? Many must be mistaken that such a man is Pope of His one and only Holy Church. Surely an error of major consequence have most confused.

It's a well known fact in the eastern church that Islam is a plagiarized version of Judeo-Christian beliefs, as for Francis I doubt he can see beyond turning the Church into something resembling a evil blend of everything, meaning nothing.

You are giving Francis way too much credit, in my opinion. I see nothing in Francis for the last 8 years that indicates other than he has no supernatural belief in Christ, and is only marginally interested in Him. Francis is a syncretist, he takes a bit from this religion and a bit from that religion and it all depends on who he is speaking to at the moment. All religions are as good as another. Christianity, Judaism, Islam, he sees no difference, they are all useful to achieve the globalist end, one indistinguishable people, the hordes, who will open their gaping mouths for the worm to be dropped in by the huge government that rules all. It is doubtful Francis believes in or cares about angels, Gabriel or any other. What matters to Francis is the material world, and how to transform that world into the Marxist utopia he imagines. To that end, religion is as good a way as any other. Look how many are fooled by him. We are at the point where the supposed pope can openly venerate a demon god in the holy ground of the Vatican garden, including having the black bowl representing that demon fertility god, brought up to the holy altar, thereby breaking the First Commandment of God, and still, normalcy bias prevents sincere Catholics from accepting the evidence of their own senses.

If we believe in God, then we must also believe in Lucifer and he fallen angels at war with God and God’s creation.

If we believe God’s angels visit us, that we have our own personal Guardian Angel and that God is active in His creation, then we must also believe that Lucifer and his fallen angels are also active and personal.

If we believe that God’s Kingdom, through His Divine will, is advanced through individual created men and women’s choice and the struggle of one Kingdom against the other kingdom through this epochal struggle then we must believe there will be visual and historical evidence of it we can see and measure.

Islam, like its close godless cousin Communism, is the religion of Lucifer. It, like Communism, is meant to appear in many ways as the Kingdom of God - in theory. But in reality it is just another evil, bastardized religion of the devil who uses religion, like his enemy God Almighty, to atttract human souls to his kingdom in eternity.

What does the religion say about Jesus Christ and His blessed Mother who was full of Grace and incarnated God With Us? That is the measuring stick, quite simple and 100% reliable, whether a religion is of God or his enemy Lucifer. Whether we believe or not, every created human being made in God’s image chooses either God or the devil. And Islam is clearly, obviously, quantifiable over millenia - of, by and for the Devil.