When Health Care is Politicized and Weaponized it Bodes Ill for America! Fight Back!

"A lie told once remains a lie, but a lie told a thousand times becomes the truth." 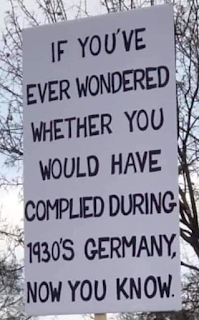 I'm reading an interesting article this morning from Hillsdale College's Imprimis. (By the way, if you never studied Latin, imprimis means "among the first things.")

The article, Science, Politics and COVID: Will Truth Prevail? was authored by Scott Atlas, who worked on the Trump administration's Coronavirus Task Force until he was defamed and drummed out by the anti-science idealogues and their no-nothing media allies! The article is fascinating and I recommend reading it in full, but will give a synopsis. Here's part of his opening, putting the article in perspective:

First, I have been shocked at the unprecedented exertion of power by the government since last March—issuing unilateral decrees, ordering the closure of businesses, churches, and schools, restricting personal movement, mandating behavior, and suspending indefinitely basic freedoms. Second, I was and remain stunned—almost frightened—at the acquiescence of the American people to such destructive, arbitrary, and wholly unscientific rules, restrictions, and mandates.

The pandemic also brought to the forefront things we have known existed and have tolerated for years: media bias, the decline of academic freedom on campuses, the heavy hand of Big Tech, and—now more obviously than ever—the politicization of science. Ultimately, the freedom of Americans to seek and state what they believe to be the truth is at risk.

Here are his major points:

1. COVID has taken an enormous tragic toll on the country, first of all by the large number of those infected and the number of deaths.

2. The "severe restrictions" have magnified the disaster and reduced the freedom of Americans who have bent the knee to the government's increasing draconian measures.

3. Government policies have "severely harmed America's children and families while failing to save the elderly" and those policies have had little impact on stopping or mitigating the pandemic.

4. Lockdowns and mandates are especially harmful and they impact lower income groups the most.

Now let's look at some of the statistics and studies:

1. A number of studies including one from Stanford U.'s infections disease doctors and epidemiologist show that the extreme measures practiced in most states had very little impact. President Biden himself stated on January 22nd, "There is nothing we can do to change the trajectory of the pandemic in the next several months."

2. Lockdowns are "extraordinarily harmful."
So what policies do we need?

1. Those in power have no intention of letting Americans go back to normal "which for Americans means to live freely -- again" as they continue to mandate masks and social distancing even for those who are vaccinated. They use defamation, intimidation, and censorship to suppress voices contrary to their own. That needs to stop!

2. Academia needs to stop smearing, rebuking, and lying about those doctors and scientists who questioned the failed health policies. Their agenda, which was clearly political, aimed at attacking President Trump.

3. The bias and ignorance comeing from the "experts" is "almost beyond parody" coming from "these same critics [who] wrote that 'professionalism demands honesty about what [experts] know and do not know.'
4. Open schools immediately.
5. Wear masks only in crowded settings. "Widespread, general population mask usage has shown little empirical utility in terms of preventing cases...those who insist that universal mask usage has absolutely proven effective at controlling the spread of the COVID virus and is universally recommended according to "the science" are deliberately ignoring the evidence to the contrary. It is they who are propagating false and misleading information."
6. Big Tech censored the discussion and crushed the debate if it didn't match the woke agenda. "Open debate should be more than permitted -- it should be encouraged."
7. The unethical conduct of academicians who are "dangerously intolerant" needs to be called out. They are contaminating the health policy field with politics. "Some even go further [than intolerance],  distorting and misrepresenting words to delegitimize and even punish those of us willing to serve the country in the administration of a president they loathe."
8. Science is a "search for truth." That ideal has been seriously damaged during the pandemic when the health field has been "contaminated by politics."
9. Finally, "The United States is on the verge of losing its cherished freedoms. It is not at all clear whether our democratic republic will survive -- but it is clear it will not survive unless more people begin to step up in defense of freedom of thought and speech." 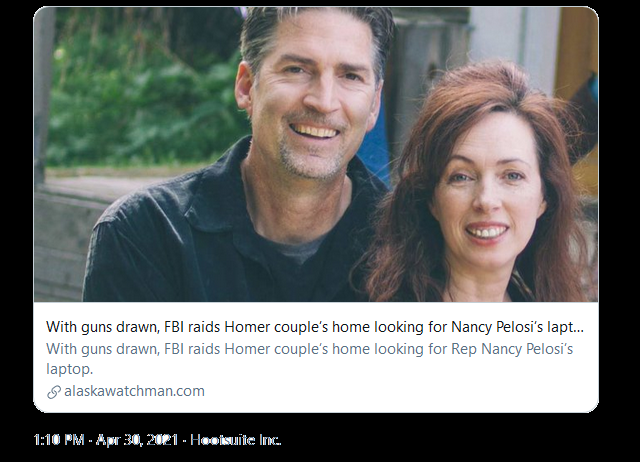 Will you be one of those who "step up" to defend our civil rights. If you won't, what will you tell your children and grandchildren living under tyranny where the secret police can break down your door without a search warrant. It's already happening as it did to Alaska couple Paul and Marilyn Hueper who woke up to a score of FBI agents pointing guns at them. Their crime? They were in D.C. on January 6th. They didn't get within 100 yards of the Capitol, but Marilyn Hueper wore a coat similar to one worn by a woman in a fuzzy picture from inside the building. They held them for hours and searched their home for Nancy Pelosi's laptop which, of course, wasn't there. Then they left without apology. Being gestapo agenst mean never having to say you're sorry. Remember Waco and Ruby Ridge.
The worst is yet to come, America, unless you fight back. Share this on social media. Send it to your friends. We are in a fight for freedom every bit as important as the American Revolution.