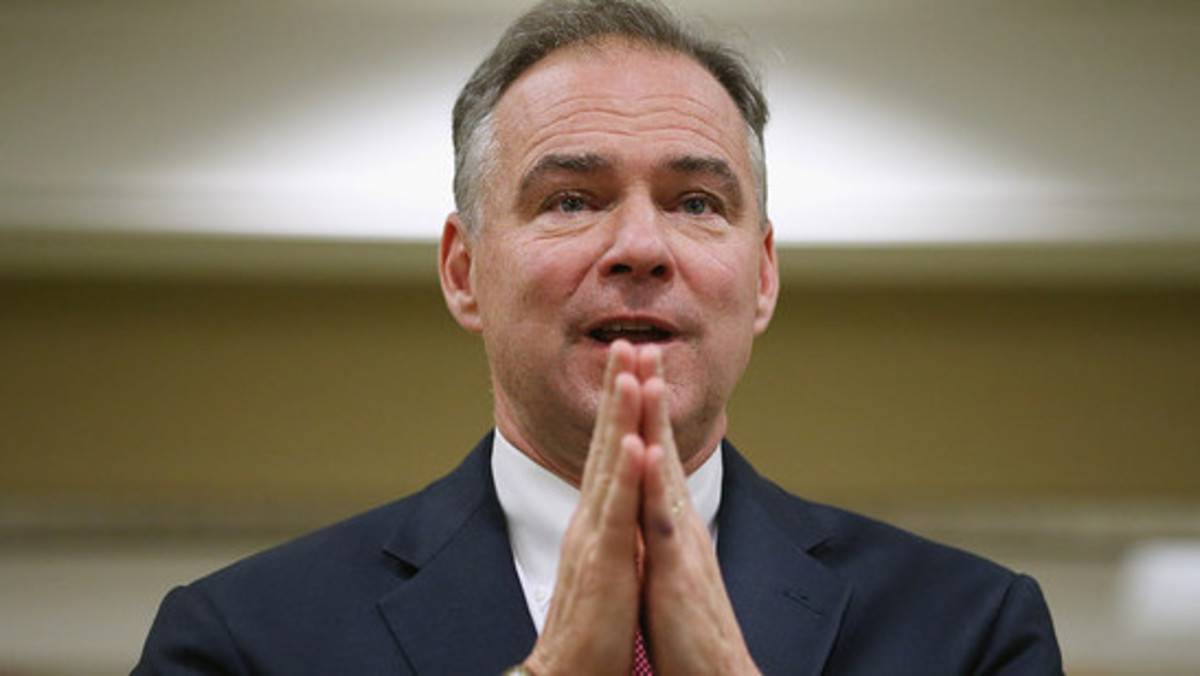 Editor's Note: Tim Kaine recently came out with his bogus theology
of the Eucharist. Kaine says Jesus couldn't care less about "issues like this," i.e., murder of the innocent. He declares (infallibly no doubt) that Jesus had a "towering message...about love of neighbor as oneself with a special focus on the poor, sick, hungry, marginalized." Kaine obviously doesn't include the least of God's little ones among the "poor, sick, hungry, [and] marginalized." The sick Down's Syndrome babies don't count, the children of the poor, those "hungry" for the love of their mothers, the marginalized babies of color in the third world -- none of them count in Kaine's pragmatic theology. He demands the Eucharist for politicians who support intrinsic evils, apparently unaware of St. Paul's warning that receiving unworthily poisons the unrepentant sinner earning him condemnation and making him more fit for hell.
Here's Fr. Tom's answer to Senator Kaine
Sadly, Senator Kaine, relying on decades of leftist propaganda and brainwashing, obfuscates. The Catholic politicians being discussed are not merely tolerant of aborticide, but also pro-actively promoting it and seeking to subsidize it.

According to his reasoning, the Eucharistic Christ and His teaching may only call a soul to conversion in a way acceptable to that soul’s premises, perspective and prejudices. Thus he would have Christ treated as merely a mascot to support one’s agenda, rather than as
the Master of one’s life.

De facto, he is blaspheming by indicating that Jesus is Moloch (cf. Lev 20:1-5), and that He wills to decisively encourage, with His Own Sacred Body and Precious Blood, practices of groups such as Planned Parenthood (PP), including promoting unchastity and irreverence for the sanctity of marriage grooming children to be open to sexual experimentation and exploitation; contraception;denial of a woman’s right to clearly informed consent; aborticide; promoting a perverse form of “affirmative action”, whereby African-American babies are aborted at a rate three times that of Caucasian babies;
slandering of those who dare to point out scientific and psychological evidence of the personhood of a pre-born baby; harvesting of organs from babies deliberately aborted alive, since the terror and trauma experienced by a baby suffering vivisection enriches those organs with adrenaline, thus allowing PP to charge higher “processing fees” for those organs;promoting the restoration of slavery by seeking to pass legislation, which would make a “seriously defective” newly-born baby the property of his/her mother, thus granting the mother “the right to choose” either to have the baby killed or to emancipate it.

It is thus truly scandalous that for half a century, the bishops have used “pastoral solicitude” and “the supremacy of conscience” as excuses to concede that perhaps Church teachings and disciplines may legitimately be treated as merely a spiritual Rorschach test. But, then again, if we concede that Jesus indeed is to be treated merely as a mascot to affirm our subjective agendas, rather than the Master of our lives as Catholics, it does make sense.

Such reasoning, however, overlooks the basic fact that obfuscation is not evangelization.

Thank you Father Tom for this great article.

Abortion is direct assault against Jesus Christ himself…Deicide…“The King will reply, ‘I tell you the truth, whatever you did for one of the least of these brothers of mine, you did for me.’ Mt 25:40.

I wish you courage to stand for Jesus in the form of the unborn even if nobody else cares--God cares greatly.