Will You Be Able to Withstand the Trial? 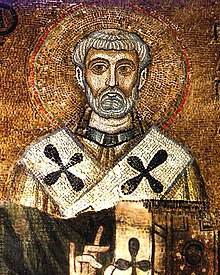 "Through Christ the eyes of our hearts are opened, and our weak and clouded understanding reaches up toward the light."

St. Clement, Letter to the Corinthians

We live in challenging times, but we are not the first. St. Clement was a pope and martyr. He's mentioned in the Roman Canon of the Mass and was the fourth to sit in Peter's chair. Murdered under the reign of Trajan, he was joined by tens of thousands of other Christians including St. Ignatius of Antioch who died about ten years later. The first century was, indeed, a bloody time and Trajan one of the most eager to persecute, even his own faithful lieutenants:

"In Mount Ararat many were crucified, crowned with thorns, and spears run into their sides, in imitation of Christ's passion. Eustachius, a brave and successful Roman commander, was by the emperor ordered to join in an idolatrous sacrifice to celebrate some of his own victories; but his faith (being a Christian in his heart) was so much greater than his vanity, that he nobly refused it. Enraged at the denial, the ungrateful emperor forgot the service of this skilful commander, and ordered him and his whole family to be martyred."

Tyrants always attack their rivals and Christ the King appears to the Herods of the world to be the greatest of threats. Worldlings want to be gods. They will not abide another or those who fail to bend the knee to themselves.

Recently a group of flag officers sent a letter warning that our Constitutional Republic is in serious danger from godless Marxism being peddled under other names. (If my dad were alive, I'm sure he would be among them.) Marxist shock troops include BLM and Antifa whose leaders foment our societies' "useful idiots," like the crowd in The Emperor's New Clothes, to advance their lies.

Look at the history books. Revolution in the streets often ends with Robespierre or Lenin or Ceaușescu in the seat of government. And the one constant in these events is terror and the elimination of those perceived as threats.

I read a chilling article this morning that every freedom-loving American should read.

Are You Prepared for the Communist Takeover?
The article stresses the need to be spiritually prepared for what is likely to come. Fr. John Hardon, S.J. often warned families that "only strong Catholic families" would survive in the future and that we needed to raise our children "to be martyrs." Rather than live in paralyzing fear, we have the challenge to recognize that these are saint-making times. As one friend told a priest we know, "The haloes are flying low." Be ready to catch one at every moment because we know not the day or the hour.
Most Sacred Heart of Jesus, have mercy on us.
Immaculate Heart of Mary, pray for us.
St. Joseph, Patron of the Universal Church, pray for us.
Posted by Mary Ann Kreitzer at 7:43 AM