Keep Your Balance. Do Something Fun and Normal: Catch a Frog! 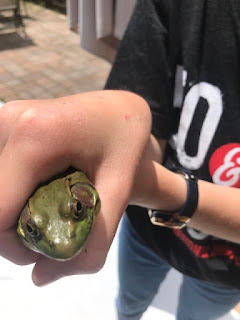 The world has gone nuts but we don't have to go nuts along with it! One of my strategies is to keep doing what I've always done. Get up, dress, and go to Mass every day. My husband and I kept going to our church at Mass time even during the lockdown. We prayed the Mass in Magnificat and made a spiritual Communion. Then we went home, had breakfast, and did our daily chores. We are fortunate to live on three acres and when you have that much property there is always a chore calling your name. Since we are beekeepers, from March to October there is plenty of bee inspecting to do as well as honey harvesting. We were never bored and since we don't go out that much except for groceries and drug store runs and to the Post Office, we were not much impacted by the draconian treatment so many suffered. What were people in apartments supposed to do when they were ordered to stay indoors and go into a kind of unnatural hibernation? It was evil! Plain and simple.

Instead of listening to Fauci, Gates, and company about isolation, I held a rosary lunch twice a month to get together with a group of friends to pray and solve the problems of the world over a nice lunch. We shook our heads over those letting themselves be bullied by Fauci and his quacks. None of us ever got sick from those regular meetings. Some of us got COVID, but we didn't get it from the lunches.

My husband and I told our children to come whenever they wanted as long as nobody was sick. And we shook our heads over the idiotic decision of so many people to just quit living -- to stay away from their families, etc. Who, after all, has power over life and death? Dr. Fauci? Joe Biden? Nancy Pelosi? Bill Gates? They lied and played games with our heads and too many listened. And because of their actions many died abandoned and alone and, worst of all, without the sacraments

The new "normal" is a country deliberately being destroyed, sinking into the status of a banana republic. Well, if it does it does, but I refuse to panic.

Instead, I want to do fun things with my grandchildren and let them feel like the world is still stable and filled with joy. So this summer I planned a Grandma camp for four Mondays in June and two in July. Today was our third meeting and the best so far. We have a theme every week, a word for the day, a virtue for the day, a quote from Scripture and a quote from a saint. The theme today was Science Scouts so we had a number of experiments from different fields of science. I explained  the scientific method and for each experiment we:

I explained that for scientists to accept a theory it had to be tested multiple times by many scientists who could replicate the results. We talked about faulty equipment and the difference between lab experiments where everything could be controlled using special equipment and environmental controls versus our experiments, e.g., in gravity dropping two objects from the top of a ladder to see if heavier objects would hit the ground first. The kids thought they would. They learned they don't, but rather both hit the ground at the same time.

My favorite experiment today was illustrating camouflage. We talked about what camouflage is and how animals in nature are often camouflaged to hide from predators or to hide as a predator to catch the prey. I showed them pictures of animals, like a hidden pictures game. I cut 300 little strips of different colored yarn (light blue, orange, maroon, and black) dropped in a marked off square in the yard. The kids (seven of them ranging in age from 6 to 13) had two minutes to find as many as they could. They all found quite a few, about 65% of the total. Then we came in, took the count from each child and made a graph. Our hypothesis was that they would find more light colored yarn against the green grass than dark and the results bore that out. Orange was first followed by light blue, maroon and black. Later while we were swimming we scared a frog in the garden and got to see camouflage in action since the green frog blended in with the weed-covered rocks. One of the children had a hard time finding him. He was well camouflaged! When he ran away and jumped in the pool, they got the skimmer, rescued him and took him to our little creek.

Next week's theme is drama. We are going to plan a puppet show for the last day when we will have a family high international tea (food made by the children representing different countries) and ending with entertainment and swimming. I'm busy right now, writing the script. The kids will make stick puppets next week and practice the parts.

Don't let the summer go by without family fun. I guarantee it will keep you young and healthy. I may be 75 in years, but I'm still a kid at heart who loves games, puppet shows, simple science experiments, puzzles, mystery stories, and Christmas in June. We're having a blast! And how grateful I am to God for faith, family, and fascinating little friends.

One of my daughters lives on a cul-de-sac/dead end street. And after about three weeks of keeping their children apart, the many families on this block of many children decided -- this in April, 2020 -- that their children were going to play like normal. And I went outside every day, regardless of weather, walking or riding a bike, never with a mask. I want to live before I die.

I moved from my restrictive home town (Portland, OR area) to Texas 2 years ago with one of my two sons and his wife & family, and nearer to my other son & family. So I have four grandchildren next door, ages 3 to 12. We love to play games when it's too hot for outside play. I love to help a bit with their homeschooling. We swim almost daily. (I found a large frog in the pool a couple of days ago; grandson #2 was willing to skim him out and set him free in the field.) The 3 yr old and 9 yr old and I attempted to make croissants...not as good as from the store but good. And we are working on a small garden: peppers, tomatoes, and sweet potatoes. And a dragonfruit, chosen by the 9 yr old grandson--very exotic for us northerners! Those four little people and their seven cousins (2 thru 14 years) are some of my favorite friends. I'd rather spend time with them than anyone else!
I love your camp and the experiments! I am savoring my grandchildren the way I enjoyed my boys' childhoods, with the bonus of not working so many hours now. God is good.