Look to THE LEFT for the Real Insurrectionists Defending Slavery!

The fight is all about slavery!

Is the infant in the womb the property of the mother, her little slave baby? Or is the baby a person in the whole sense with rights?

The original Roe decision was a pro-slavery document equivalent to the infamous Dred Scott decision which made blacks "property" of their masters. Overturning Roe does not solve the problem, since liberal states will continue to declare the infant in the womb a slave owned by Mom. Ancient Rome had the law of paterfamilias giving the father the right to choose life or death for his child. Today, many states have materfamilias where mothers dictate with a thumbs up for life or a thumbs down for death. What we need now is the equivalent of the 14th amendment declaring the personhood of the baby in the womb.

As for the current situation, the insurrectionists are out protesting in the streets in their season of "rage."

In Phoenix, protesters tried to breach the Capitol while the legislature was in session. It looks very much like January 6th but the leftist media won't be calling that an insurrection because their rage is justified. See more in other states here. 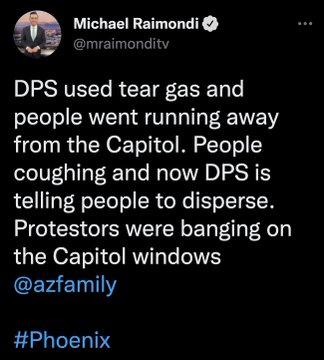 A pro-life woman in Seattle was attacked by a group of Antifa supporters (mostly men) and thrown to the ground and pepper sprayed. Wow! Talk about the "right to choose." The message of the male bullies, "You better choose what I want, sweetie, of you know what's good for you." And there you have it! Men who use women as sex toys are angry. They'll happily kill their own babies and abuse the moms in order to avoid responsibility. I thank God for godly men! As for the moms who kill their babies. It's unnatural and barbaric.

And of course the mainstream media is featuring the pro-abortion side as usual. Here's coverage in New Orleans, not one word from a pro-life person. We don't exist.

Biased coverage from the left-wing media is nothing new. Back in 1972 after the two-part pro-abortion Maude episode, a large group of pro-lifers protested at the CBS studio in D.C. I was one of them. (The episode was funded by Norman Lear's population control group. Money has always gushed into the abortion evil.) Only a handful of pro-aborts were across the street. Guess who got all the media coverage? Some things never change!

The media has been misrepresenting Alito's decision ever since the leak, and now will go into overdrive. Most of them probably haven't read it. I did and it's as powerful a judicial opinion as has ever been released by the Supreme Court in my opinion. It doesn't solve the problem, though.

If you want a parallel situation, look to the Missouri Compromise that created free states and slave states. Essentially we are now in that situation with states where the baby's rights are recognized (more or less depending on the state) vs. states where the baby is the property of the mother and can be murdered up to birth and even after by deliberate neglect.

The Civil War has just begun. What we need is a personhood amendment, something that was pushed in the early days and deep-sixed by a Catholic priest, James McHugh, a friend of the abortion lobby who was later named a bishop. Sad isn't it? We can see so many ostensibly Catholic voices promoting the intrinsic moral evil of murder. And the worst murder of all - the murder of the most innocent.

Yes, indeed, the fight has just begun. Put on the armor of God and join the battle to defend the innocent!

Posted by Mary Ann Kreitzer at 9:55 AM

I just read a 680 page novel about FGM (female genital mutilation) by a well known female feminist author. Never once in the book did she mention ISLAM but rather blamed the control of Islamic women and children by the husband and father on NIGERIAN CULTURE....the same Nigerian culture where Christians currently are being slaughtered by Islamic jihadists today.

The main theme of the book was how evil PATRIARCHY is and how the husband - the MAN - is in total control of his wife and children thereby making them his SLAVES to be beaten and worked to death, mutilated and killed if he simply wants to kill them. The MAN in Nigerian culture is in favor of child brides therefore must have his daughters undergo FGM. The sons must be sent back to Nigeria to marry a virgin who has been cut etc. The author discussed all the above in detail without acknowledging that this is radical ISLAM, not Nigerian culture in general.

I find the parallels of MATRIARCHY to be the same where the WOMAN is in charge of life and death. Where her religion of liberalism, worshipping at the throne of wickedness, determines who to kill. The answer to all her PROBLEMS is to either not have children or to kill the child in her womb.

In both parallels - where WOMAN is the center of controversy - LOVE is missing. There is only hatred and death. Thank God for Donald Trump's 3 supreme court appointments. This decision brings to light the God ordained 4 MAGA years of his presidency.

Roe v Wade has YET to go. It now has to be fought in fifty states, and no longer has "inalienable" in it's sails, unless we can pass the equivalent of thirteenth amendment, which should have been our focus the whole fifty years.
Thanks for nothing, president warp speed. GOP was conceived to abolish slavery then, has maintained the platform to abolish abortion now (except that you had wanted to molest it with rape exceptions), and it deserves a true prolife candidate that will abolish abortion for "created equal" birthday in 2026.

As someone who spent forty years on the front lines, I can confidently say that ditching Roe will save lives. Already states are banning abortion. Not all abortions in some states, but it's our job now to make sure ALL the babies are saved. One important thing the justices did was pull the rug out from under the idea that abortion is a sacred right. The law is a teacher and as the states pass more stringent laws, women will be more reluctant to kill their babies.

We have a big job ahead of us, but this is a blessed step in the fight and on the feast of the Sacred Heart and the birth of John the Baptist.

I thank Trump for his appointments. They also pushed back on New York's gun overreach and on Maine's discrimination against Catholic parents. What do you think would have happened if Hillary were president and appointed three Supreme Court justices?

It seems to me that your hatred of Trump is blinding you to the good. I agree with you about the vaccine, but can't you give Trump credit for anything?

"While red states in roughly half the country are poised to ban most abortions following the overturning of Roe v. Wade, many blue states have already moved to protect abortion rights and expand access ahead of Friday's Supreme Court decision overturning the landmark 1973 law.

According to the Guttmacher Institute, a pro-abortion rights research group, at least 16 states and Washington, D.C., have existing laws that protect abortion, and at least 11 Democrat-controlled legislatures have moved to expand abortion access in anticipation of the Supreme Court’s decision in Dobbs v. Jackson Women's Health Organization on Friday, which overturned Roe v. Wade and left the question of abortion up to the states to decide."

We are going back to the position of the country before Roe when the pro-life philosophy was winning. Even New York voted to rescind their liberal abortion law and it only survived because Rockefeller vetoed it and there weren't enough votes to override the veto. The strategy of the liberal left has ALWAYS been to go to the feds to get NATIONAL top-down enforcement of their agenda. That's why they got FACE (Freedom of Access to Clinic Entrances Act) passed. FEDERAL courts with liberal judges always protect the left's evil agenda. They cannot continue to win at the state level. So now we need to fight like hell (against hell) to win protection state by state and household by household to change the hearts of the heartland. Back in the 70s and 80s I gave 100s of presentations on pro-life. I remember one when a neighbor who had argued the pro-abortion position came up to me and said, "I never knew it was like that." She became pro-life from that moment.

We will probably never change the hearts of rich elitists like Nancy Pelosi, the Bidens, the Clintons, etc. Their greed and their desire for power are their gods. But we can change the hearts of people of good will. Truth has power, especially when it's spoken in love.

"The strategy of the liberal left has ALWAYS been to go to the feds to get NATIONAL top-down enforcement of their agenda."
Except with slavery. There, the Democrats wanted states rights, when the solution was federal ban *because this was* an inalienable right we were dealing with. Same with abortion... States don't get to pick and choose whether they can alienate the right to life or liberty. *Because* we are created equal... We have these individual inalienable human rights.

Well, I agree, rohrbachs, that no one has the right to kill a child. I think I've made that pretty clear and my entire adult life has been committed to saving babies.
Nevertheless, returning the debate to the states will save lives. Isn't that the point of pro-life work - saving babies?

Interesting isn't it that the south has more states wanting to protect the babies than the north. Look at New England which had a very active slave trade during the colonial period and even into the 19th century. As one article put it, "Colonial New England got filthy rich off the slave trade."
https://www.historynet.com/online-exclusive-colonial-new-england-got-filthy-rich-off-the-slave-trade/

I've said several times that a personhood amendment is the answer. It shouldn't be necessary, but then neither should the 13th and 14th amendments have been necessary.

Law from the bottom up is the Catholic way, i.e., subsidiarity.