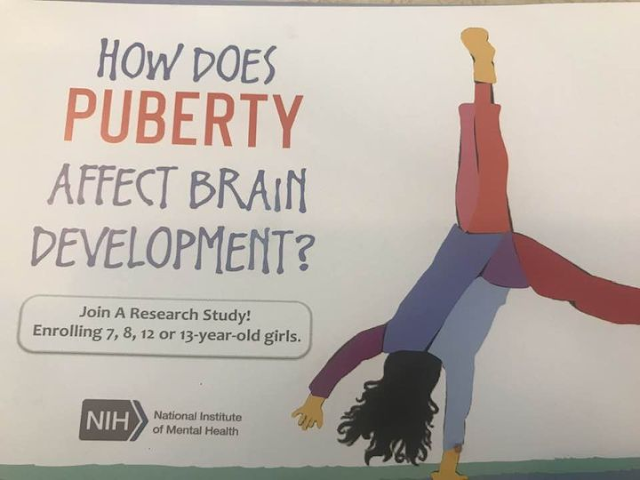 I got this postcard in the mail the other day. Hmm....enrolling girls only. Don't boys have brains? Don't they go through puberty? My suspicious mind immediately went to the big question -- WHAT ARE THEY REALLY AFTER?
Here's the back side of the card. 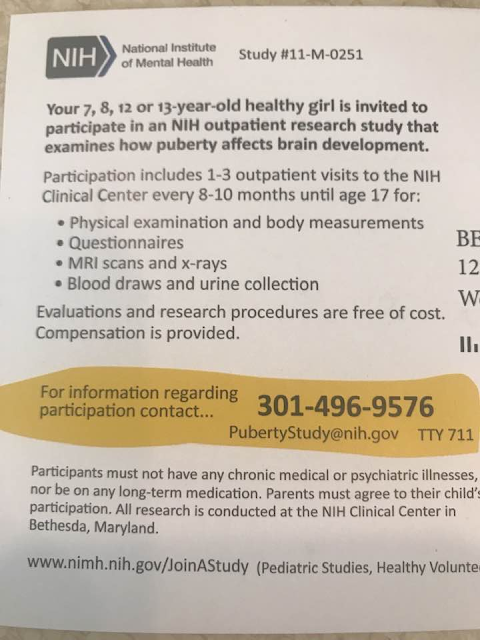 What exactly is on those "questionnaires?" Are parents allowed to be present during the examinations and any interviews being conducted with their daughters?

Consider the involvement of the NIH in developing the COVID virus through gain of function research to make it more easily transferred to humans. The Wuhan lab received a $3.1 million five year grant (2014-2019) for bat research. Then they lied through their teeth that no bats were involved. (Pay no attention to the man behind the curtain hand-feeding the bats.) Consider the massive human gene therapy experiment with COVID shots masquerading as "vaccines."

Remember, NIH is Fauci's baby and we've seen the level of evil he's capable of inflicting on humanity. Suppressing protocols that worked to save lives were deliberately banned in favor of the most massive human experiment in history.

Would you trust your daughter to these ghouls? What are they really looking for since they've excluded boys? Is this study really about examining brain development in puberty or is there a hidden agenda that they won't be sharing with parents? My mind immediately went to transgender grooming. I really do wonder what's on those questionnaires.

What do you think?

Posted by Mary Ann Kreitzer at 7:46 AM

I don't think there is a nefarious plot particularly to destroy girls lives and not boys, if that's what you're getting at. Whatever the case may be, we should be extremely wary of NIH and organizations like them. Their track record has been such that I would not trust them on much of anything that they say they are doing for our good. I would certainly not trust them with my daughters. But I feel that if people don't know that by now, they're NGMI (not gonna make it), as the kids on the internet say these days.

I'd like to think you're right, Buckyinky, but, if you recall, WHO and the UN engaged in a sterilization program in Kenya and other places lacing tetanus vaccines for WOMEN only that were laced with HCG, the pregnancy hormone. It caused women's bodies to attack their own children.

Who conceives and carries the babies? Women! And when do girls begin to be able to conceive and carry the babies? At puberty. Here's a link to info about the Kenya program.

Population control has been a big government goal for decades. Promotion of homosexuality and transgenderism assists that goal. I can only speculate about what's going on here, but, as you say, "we should be extremely wary of NIH and organizations like them." Amen!

The commercials that invite you to find your ancestry by sending in DNA material can be lumped into this same suspicious category. This is really weird. Whatever it’s about it’s not what they are claiming.

Thanks for the response Mary Ann. I've seen too many assaults against men and boys and their natures to agree with you that Satan and his forces of evil have it out particularly for women and girls.

He will assault the beauty God has created in nature wherever he (the devil) encounters it. He won't assault female fertility in men because obviously they don't have that in their nature. But he will, for example, assault the noble strength a man has to protect and provide by fatuous accusations of "toxic masculinity." But in neither of these cases (feminine fertility or masculine strength) is Satan attacking because he hates one over the other. He hates both because they originate with God and are true and beautiful. I don't see a valid reason to make it sound like women overall are being singled. Though in the particular case of the NIH and this program I agree with you that there is probably an assault on women's nature going on behind the scenes. If that is all you are pointing out, I think I'm in total agreement and I would need to apologize for the misunderstanding.

I know you're not a feminist, and it's only because I know that is true that I bring up my concern here. It's a subtle feminist ploy to think of women as having a special victim status.

I completely agree. I have ten grandsons and recognize that there is a definite war on them. We have a freshman at JMU who had fabulous grades in high school. He did not get into Virginia Tech, his first choice. I'm sure it's because he is a white male. Have you read Christina Hoff Sommers, The War Against Boys? It was published in 2000. If anything, the war against boys has escalated since then. My point here was only about fertility and population control. My gut instinct is that there is a connection to promoting transgenderism in girls. The more girls they can sterilize, the fewer babies in the future. That's why contraception has always targeted women. We are the child-bearers and child-bearing is a disease.

Yes, I read Sommers book around twenty years ago...I think it must have been around the time it was published. Thanks again, God bless.

It may be a legit study but certainly the NIH sadly deserves all the suspicion it gets. And yes, I’ll err caution on the side of children. Interesting in that it requires “parental consent”? Increasingly teachers, schools, counselors, govt, have made excuses for why youngsters “can made their own decisions” including EUA shots!