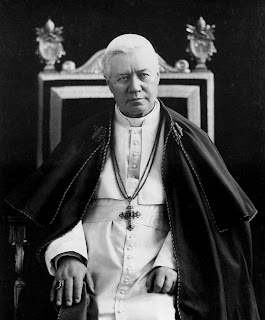 In the traditional calendar, yesterday was the feast of Pope St. Pius X, a man for our age.

The situation at the beginning of the 20th century was much the same as it was for us at the beginning of the 21st. Dissent was rampant. Catholics in the pew were being formed and misled by theologians and catechists espousing a novel religion at odds with the faith, the very essence of modernism which the pope called the "synthesis of all heresies."

Modernism both without and within the Church led Pius X to publish Pascendi, the encyclical against modernism, as relevant today as when it was published September 8, 1907. Pius lamented that the modernists preached that "Dogma is not only able, but ought to evolve and to be changed." That for the faith to be "living" it had to adapt to the spirit of the time. Like today's modernists, those of the early 20th century maintained that "all religions are true" and that doctrine "evolves." Nothing is fixed; the rock is smashed to sand. Although the Assisi meetings were decades away, the spirit of false ecumenism was already polluting the faith with syncretism.

Pope Pius described the modernist Judases who speak with a forked tongue. His words describe the teachings of many of our own bishops and, even, the pope. In outlining the methods of the modernists, Pius writes:

In their books you find some things which might well be expressed by a Catholic, but in the next page you find other things which might have been dictated by a rationalist. When they write history they make no mention of the divinity of Christ, but when they are in the pulpit they profess it clearly; again, when they write history they pay no heed to the Fathers and the Councils, but when they catechise the people, they cite them respectfully....So, too, acting on the principle that science in no way depends upon faith, when they treat of philosophy, history, criticism, feeling no horror at treading in the footsteps of Luther, they are wont to display a certain contempt for Catholic doctrines, or the Holy Fathers, for the Ecumenical Councils, for the ecclesiastical magisterium; and should they be rebuked for this, they complain that they are being deprived of their liberty. Lastly, guided by the theory that faith must be subject to science, they continuously and openly criticise the Church because of her sheer obstinacy in refusing to submit and accommodate her dogmas to the opinions of philosophy; while they, on their side, after having blotted out the old theology, endeavour to introduce a new theology which shall follow the vagaries of their philosophers.

Isn't this exactly what we are seeing today, a cognitive dissonance? Many Catholics try to rationalize and make the disparate proclamations of Francis unite. It's impossible!

Pope Francis continuously says orthodox things and then turns around and undermines them with other contradictory words and by his actions. He has mouthed some pretty defenses of the unborn and the weak and vulnerable and then fills the Pontifical Academy of Life with the death peddlers and invites to the Vatican political ideologues advancing gross evils in society like Jeffrey Sachs. Francis treats questionable science as if it were dogma. With no expertise at all, he baptizes questionable and controversial issues like climate change and the COVID gene-therapy jab. He maligns those who prudently disagree. He makes dogma out of prudential matters and treats the unchanging dogma of the Church like putty.

The fact is, that the greatest modernist in history, a man whose actions and statements would have been heartily condemned by Pope Pius X, sits in Peter's chair. If you read Pascendi, you will see Pope Francis and his cohort of modernists on every page.

Pope Pius X's motto was "To Renew All Things in Christ." He met the modernist insurrection boldly and fearlessly. We need a man like him today. Unfortunately, since most of the cardinal electors have been appointed by Francis we are unlikely to see a good pope elected by the next conclave. But God never abandons His people. Despair and hand-wringing are not an option.

There's a simple answer. KNOW THE FAITH AND KEEP THE FAITH.

John Vennari was a man I knew and much admired. Thank you for posting that recording.
I was so pleased to see you quote Pope St. Pius X at his feast day. I've been a long time helper of the SSPX (40 years!) and that saint is very high on my list when I pray for help for the Holy Church. Your quotes were so timely! God bless you!

Your focus on "cognitive dissonance" is spot on. From that place of spiritual confusion, we are rendered less able to defend ourselves - which is by design, no doubt.

Similarly, your remedy, "Know the Faith; Keep the Faith" is our only hope to reestablish our spiritual defenses.

As the "Church of Mercy™️" rips out every last vestige of the TLM of that it can, when it can, where it can, an interesting homily today from our young SSPX Priest on this, his Feast Day in the Society named for him ...

Our Priest spoke of when and how the tradition was changed in which young children were typically not allowed to receive Holy Communion at any age younger than 12. Defender of Dogmas and Tradition, Pope St. Pius X, changed that to as young as age 7. The question is, why, and to what purpose? Well, our holy Pope St. Pius X was convinced that, through particular circumstances, God was showing His Vicar that God wished His Graces to flow to children, more freely even to some adults. Pope St. Pius X himself loosened restrictions toward reception of something as core as Holy Eucharist. He did not make restrictions more legalistic. And in his reasoning, he demonstrated that Jesus Christ, and God's Graces that flow from Him in the Sacraments, desired to be closer to His sheep in these times.

The point of the Homily: "16 Let your light so shine before men, that they may see your good works, and glorify your Father which is in heaven" (Matt 5:16).

All of the controversy and confusion fades away into smoke and dust if we just keep our eyes fixed firmly on Jesus, our Blessed Mother and the Church that exists outside of time.

Agree 100%. Guiseppe Sarto had a sense of the sacred, which is absent in Roncalli onwards.

Have you noticed all these men (Roncalli, Montini, Luciani, Woytyla) are all being canonized quickly while other Popes took centuries in some cases? It's a way of attempting to legitimize the Protestant Vatican 2. 4 Popes become saints who oversaw Vatican 2 and its rollout?

Do the Vatican folk think all Catholics are that stupid?