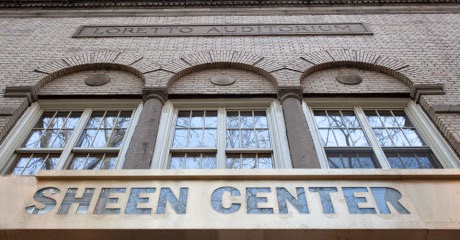 First Things blog has an interesting article on the new Sheen Center in New York City, named after the Venerable Fulton Sheen. The last sentence in the article should perhaps be the first:

[The] Sheen Center is the archdiocese’s monument to post-Catholicism.

As a Catholic, I am scratching my head over the Sheen Center and plans for its use. First Things' Maureen Mullarkey writes in Sheen Center Pre Partum Blues,:


Described by its own in-house consultant Nick Leavens  as simply a "new off-Broadway arts complex." it will "function as a hub for the circulation of tax exempt monies."

How exactly is running an off-Broadway theater a function of the Catholic Archdiocese of New York? Perhaps the answer is simply what Leavens said above, essentially follow the money, one more way for the Archdiocese of New York can get its hands in the taxpayers' pockets -- through government grants to the arts.

According to the center's press release:


Companies who have already signed on to use The Sheen Center include The New York International Fringe Festival, Strange Sun Theater, /the claque/, Terranova, Wingspan Arts, MorDance and Voyager Theater Company.

Let's take a look at a few of these theater companies.
Among the plays currently advertised by the Fringe Festival is one called Sketchy as F*ck with this show description: "Three NYC comedy veterans perform a sketch show featuring offbeat, whimsical, odd and aberrant characters and situations framed through sketches, character monologues and music. The result is a non-stop theatrical comedy experience which embraces weirdness in all its splendor." Another one-hour show is All My Children. The blurb: "Dr. Grean is America’s frozen family expert and proud mom of 23 could-be-kids in a cryocan. Watch her lecture go spectacularly wrong as blackouts sweep LA, causing a family meltdown! It’s like watching a TEDTalk colliding with the Hindenburg." Then there is The Apple Tree or Penis no. 7. The blurb for that reads, "A Dr. Seuss meets poetry slam exploration of a young woman's wild and hilarious ride through the mystifying world of the penis, asking "Why is it that once I put your d*** in my mouth we don't talk anymore?"

Moving on to The Claque, we find in November they feature a new play reading called The Ugly Pilgrim Thing telling, "What happens when White People teeming with disease and buckled hats go on a vacation they enjoy so much they decide to stick around to rename a few things." Ah, yes, the politically correct attack on the evil white men who established our Constitutional Republic.

Falsettos chronicles the struggles of one family to stick together, no matter the obstacles. At the center is Marvin, who leaves his wife and young son to live with another man. His ex wife marries his psychiatrist, and Marvin ends up alone. Two years later, Marvin is reunited with his lover on the eve of his son’s bar mitzvah, just as AIDS is beginning its insidious spread. A seamless pairing of March of the Falsettos and Falsettoland, acclaimed off Broadway musicals written nearly a decade apart, Falsettos won 1992 Tony Awards for best book and musical score.

But at least most of Wingspan's efforts seem to focus on introducing children to the arts. Hopefully, they exclude programs like the horrible sexually explicit Secrets that Catholic parents have had to fight in their children's schools and CCD programs.

The Center press release informs the public of its other available uses:

What is, perhaps, saddest of all is what this building used to be. Mullarkey writes:


The complex stands on the site of the defunct parish of Our Lady of Loretto which became a Catholic Charities shelter for homeless men more than seventy years ago. The name of the Center’s largest performance space, the 250-seat Loretto Auditorium, nods to the displacement of the Bowery homeless by the city’s expanding arts-and-culture scene.

Remember when the Church served the poor and the needy? Isn't it edifying to think of a site that once housed our Blessed Lord in the Eucharist will now be used for...well...who knows? And how exactly is this a function of a Catholic Archdiocese, one that is closing dozens of churches?

Cardinal Dolan assures us that nothing unacceptable to Catholic teaching will appear at the Sheen Center and the current lineup up plays is okay. But somehow, in view of what Cardinal Dolan thinks is "acceptable," I'm not comforted. Will anyone really be overseeing what's going on in the rehearsal rooms, what kind of play readings take place? I seriously doubt it. And what happens when a same-sex couple wants to rent a room for an "intimate reception?" You can be sure someone in the gay community is already making a plan! Ah...but we can all depend on Cardinal Dolan not to betray us. After all, Cardinal Dolan says no unacceptable events will take place there and Cardinal Dolan "is an honorable man."

In closing, I can't help thinking of Mullarkey's description of the Sheen Center as a "monument to post Catholicism," in other words, a tombstone rising over the city of New York. It makes me want to weep. Which seems appropriate. Isn't that what people do at funerals?
Posted by Mary Ann Kreitzer at 5:12 PM