I received the following forwarded email sent out by Christian McDonnell. I'm happy she copied the text of Msgr. Pope's blog article before it disappeared in a puff of incense! 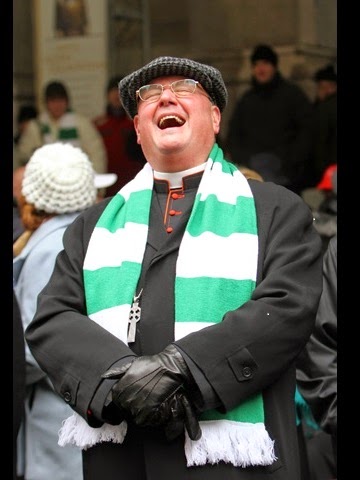 Here’s the full text of the post, copied from blog before it was apparently removed:

The time for happy-clappy, lighthearted engagement of our culture may be nearing an end. Sometimes it takes a while to understand that what used to work no longer works. Let me get more specific.

Decades ago the “Al Smith Dinner” was a time for Republicans and Democrats to bury the hatchet (even if only temporarily) and come together to raise money for the poor and to emphasize what unites us rather than what divides us. But in the old days the death of 50 million infants was not what divided us. We were divided about lesser things such as how much of the budget should go to defense and how much to social spending. Reasonable men might differ over that.

Now the St. Patrick’s Parade is becoming of parade of disorder, chaos, and fake unity. Let’s be honest: St. Patrick’s Day nationally has become a disgraceful display of drunkenness and foolishness in the middle of Lent that more often embarrasses the memory of Patrick than honors it.

In New York City in particular, the “parade” is devolving into a farcical and hateful ridicule of the faith that St. Patrick preached.

It’s time to cancel the St. Patrick’s Day Parade and the Al Smith Dinner and all the other “Catholic” traditions that have been hijacked by the world. Better for Catholics to enter their churches and get down on their knees on St. Patrick’s Day to pray in reparation for the foolishness, and to pray for this confused world to return to its senses. Let’s do adoration and pray the rosary and the Divine Mercy Chaplet unceasingly for this poor old world.

But don’t go to the parade; stay away from the Al Smith Dinner and all that “old school” stuff that hangs on in a darkened world. And as for St Patrick’s Day, it’s time to stop wearin’ the green and instead take up the purple of Lent and mean it. Enough of the celebration of stupidity, frivolity, and drunkenness that St Paddy’s day has become. We need penance now, not foolishness. We don’t need parades and dinner with people who scoff at our teachings, insist we compromise, use us for publicity, and make money off of us. We’re being played for (and are?) fools.

End the St Patrick’s parade. End the Al Smith Dinner and all other such compromised events. Enough now, back to Church! Wear the purple of Lent and if there is going to be a procession, let it be Eucharistic and penitential for the sins of this age.
For the sake of His sorrowful passion, have mercy on us and on the whole world!
How say you

Interesting, how priest's posts that either directly or indirectly (Msgr. Pope doesn't say a word about the cardinal) criticize the Cardinal of New York just disappear into the ether.

Another disappearing act happened when posts about Fr. Justin Wylie and the situation at Holy Innocents disappeared from Fr. Z's blog. Fr. Z quoted from Msgr. Pope's article even though it was already scrubbed from the Archdiocese of Washington, D.C.'s website. (Ah...how hard it is to wipe the internet and drop things down the memory hole -- one of its blessings!) We'll see whether Fr. Z's post disappears and the error message appears on his site as well. Dear me, I wonder what threats these priests receive, or are they just asked to remove the "offensive posts" and do it out of obedience to their superiors?

Well, the laity is not as constrained as the clergy. We have not put our hands between the hands of bishops and promised obedience and, as St. Thomas Aquinas says, public scandals need to be addressed publicly especially when the faith is in danger. And surely these days it is in danger big time -- especially the faith of our poor children! Which is why mother bears and grandmother bears like me are doing our best to tree the heretics, especially the ones in Roman collars because they are the most dangerous.

Yes, indeed, it's long past time to end the debacle of the Al Smith Dinner and the St. Patrick's Day parade especially now that gay activists are marching publicly under their banner, heartily welcomed by the "Grand Marshal" of the parade, Cardinal Dolan. Perhaps he'll wear a green beer mitre for the parade, companion to the cheese mitre he wore in Wisconsin.

What the cardinal is doing to New York reminds me of Fr. John Hardon's warning that entire Catholic dioceses in the U.S. would disappear. It's becoming harder and harder to find any faith in New York City under this prince of the Church who reeks of worldliness. Pray for Cardinal Dolan. He may not martyr his "troublesome" priests, but he certainly killed the ministry of Fr. Wylie in the Big Apple and at the U.N. And I suspect he is involved in "killing" columns he doesn't like when their authors are priests.

I wonder what the morale is among the orthodox priests of New York as they watch his incredible antics.

I didn't realize the Fr. Wylie post disappeared too.

Catholic laity must keep blogging if priests are going to be censored and gagged.

Frankly, I wasn't surprised. Cardinal Wuerl is cut out of the same cloth as Cardinal Dolan, although he is a more reserved personality. But he has made it clear he will never use Canon Law 915 to protect the Eucharist from rabidly pro-abortion politicians no matter how egregious their actions. At his installation Mass, he stopped during the processional to shake hands with pro-aborts Ted Kennedy and John Kerry. ("They love the first places at feasts, and the first chairs in the synagogues." Matt 23:6)

Kerry was later photographed receiving Communion from the Apostolic Nuncio.

It's all very disheartening.

LOL! Once it's out there, it's out there. I always tell my kids to be careful what they put in emails or on Facebook. Nothing is private any more.

It's grave scandal. It is causing people to lose their faith and leave the Church. It's too much now.

Bless you all for your prayers and encouragement. I hope you will understand if I cannot continue to post your comments on the parade article here. I will read them but cannot post them, I will send you an e-mail gratitude.

I ask your charity and understanding for the Archdiocese of Washington which has always generously sponsored this blog and been supportive of our conversations.

I also hope you will understand if I cannot explain why it was removed.

I am a loyal son of the Church and I love my Archdiocese.

He then did a full blown apology.

Knowing how Cardinal Wuerl is and his past history with orthodox Priests (e.g., Fr. Guarnizo), when I saw this series of events transpire, I had visions of Fr Joe Clark.

I agree, Terry, it is grave scandal. And it is also proof positive that clericalism is alive and well in the hierarchy. When princes of the Church act like petty, little tyrants treating their priests, not as sons, but as enemies to be controlled, it certainly is grave scandal.

I say we make Pope the next Pope!!!

Jesus did not eliminate sinners and neither can any pope or cardinal. Magic wands are not available. This false "disappointment" is a shallow show. The world is a mixture of good and evil until the day of the harvest, which is God's action. We are disappointments to others and they are to us. Keep yourself in God's grace, but do not judge or condemn others.

We should never "judge or condemn" the souls of others. Their actions are something else. I certainly condemn the horrors of history. Those who engage in beheading innocent journalists or commit war crimes, etc. should be condemned by everyone. Their actions judge and condemn them and they should, after trial, be incarcerated for the public safety.

Timothy, ignoring obvious problems is what got us the pexophilia scandal.

Right on Dymphna! That it did. Silence and cover ups for such actions in the Church are not the answer. I do believe that silence is what got us into the mess we are in for a good number of years. Those in the Church MUST defend her. We are all called to defend the Church, even if we have to defend her from the missteps of Priests, Bishops or Cardinals. Did not Jesus Himself go on a rampage in the temple? Yes, we have to be charitable, but defend her we must. Cardinal Dolan is misguided in his approval of sin, and Catholics must be made aware.

"Do not judge" does not mean "Do not call out sin" I think there are many who are not understanding that. Some of our clergy are leading their flock astray, and some are even leaving the Church because of errant clergy. It must be brought into the light for ALL TO SEE.