The Crux of the Matter? To Enable Dissent and Sin!

The Crux -- is a web project of that oh-so-friendly-to-Catholics Boston Globe to feature "Catholic" news. John Allen, former columnist for the National Catholic Reporter (aka, the fishwrap), is heading up The Crux and the site has hired Margery Eagan as a columnist. To see how "Catholic" she is read this column where she goes after those terrible people on the right who oppose the contraceptive mandate and abortion. This paragraph exposes her as one more pro-abortion feminist zealot:

It's pretty clear that The Crux is the on-line version of the anti-Catholic fishwrap not only enabling, but encouraging dissent from core doctrines of the Church.

So somebody explain to me why Cardinal O'Malley is cheering on this latest assault against the faith?

It seems today that we have a large number of high level clerics who believe sowing confusion is a virtue. They call it "mercy" to encourage people to walk a tightrope across the pit of hell laden down with unrepented mortal sins. One can only hope that the sinners are ignorant of the seriousness of their condition. It's hard to believe the clerics are! 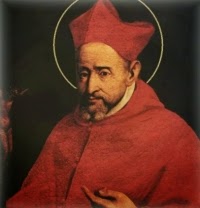 Considering it's the feast day of St. Robert Bellarmine, I recommend reading his meditation on hell. Hell is real and we should strive to do everything we can to see that no one goes there. Will tickling ears and spreading a faux "mercy" really help save souls? Will saying "Bravo!" to mortal sin save a single soul? Will holding pre-pride Masses with rainbow decorations that signal approval of the sinful gay lifestyle bring a single soul to repentance? What do you think!

Jesus said "Zeal for your house consumes me!" Meanwhile, our modern pharisees turn the house of God into an amusement park where "all are welcome" and everyone is assured of heaven. I wonder what St. Robert Bellarmine would say if he were here today. He would no doubt be on his way to Malta with Cardinal Burke.
Posted by Mary Ann Kreitzer at 11:59 AM