Betrayed by the Republican Establishment Again 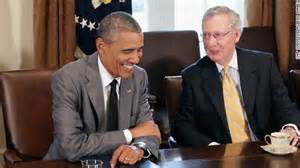 Mitch McConnell: Can you say Judas?

Mitch McConnell Does it Again

All McConnell cares about is his seat and his little fiefdom. He doesn't give a hoot about the country as long as he can keep the taxpayer dollars flowing into his pocket and enjoy the perks and privileges of being among America's aristocrats. Here's a little from the article about McConnell's betrayal:

McConnell's betrayal goes beyond this one issue. In the past eight months, he has kicked out all three legs of the Republican stool.

He betrayed fiscal conservatives when he broke his promise to rip Obamacare out "root and branch" and sided with the Democrats to save the Export-Import Bank.

He betrayed national security conservatives when he broke his promise to defund the president's executive amnesty and gutted the Senate's ability to stop the Iran deal.

And now he's betraying social conservatives by refusing to even to try to stop taxpayer funding for Planned Parenthood.

McConnell is a perfect example of why voting party these days is useless! Vote for principled candidates who stand for moral goodness and uphold the Constitution. "Conservatives" like McConnell and Boehner have aided and abetted Obama on every single thing he's wanted while pretending they stand for conservative principles. Never vote party in this "two party" system. It's a sham. There is only one party with two wings -- Democrats and Democrats Lite. Find out where candidates stand and vote for candidates based on their principles. Otherwise, you really are wasting your vote!

I can proudly say that I have never missed an election in 50 years and have never voted for a Democratic candidate. I feel we are morally bound to participate in the political process, and will be judged on each and every vote we cast. So, what should I should do? For the last several times around I've held my nose and pulled the lever for the Republicans, which yields nothing out here in West Coast Liberaland. I refuse to vote for Caiaphas, but voting for Judas instead makes no sense.

I agree. I always go to the polls, but sometimes I've had to write in because neither candidate was acceptable. Some call it a wasted vote. I disagree. If the choice is between Adolf Hitler and Joseph Stalin, a write in is the only choice.