The Pope's Speech to Congress: What Are His Priorities? 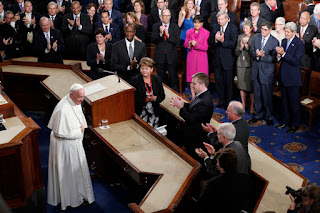 A friend of mine wrote this on his Facebook page after the pope's speech to Congress this morning.

"About 145 babies were aborted during this speech to congress. I'm not sure how many criminals were put to death during that time but I'm guessing it was quite a bit fewer. Just saying."

It got me thinking. How enlightening would it be to go through the speech with a pen and paper and timer and write down how much time was given to each subject? I only heard one sentence about defending life from beginning to end and very little on the family that couldn't be interpreted as applying to the new definition of family in all its diverse forms. There was a lot more, as my friend points out, on capital punishment and, of course, on social justice whatever you think that means.
And that is part of the problem. Words these days are interpreted from the dictionary of Humpty Dumpty which is digital, so definitions can be changed at will according to the latest liberal fad. Down the memory hill with politically incorrect terms and up with the new, enlightened ones. Facts are malleable; truth is relative.

How does the secular world define the terms below? Do they mean what you mean when you use them?

And then there's context. What does the context of the papal quote below about life do to its meaning?


"The Golden Rule also reminds us of our responsibility to protect and defend human life at every stage of its development. This conviction has led me, from the beginning of my ministry to advocate at different levels for the global abolition of the death penalty."

"Ah," one thinks as the pope begins speaking, "He will defend the littlest innocent ones waiting to be born." But no, it is to call for abolition of the death penalty. The little ones condemned to death every day receive short shrift. A country rabidly committed to their killing can comfortably applaud the line, the Democrats confident that once again their commitment to murdering the unborn and selling their body parts will remain hidden in the closet. The pope has not embarrassed them. In fact, the greatest moral leader in the world has redeemed them by his silence. (Remember, this is taking place amidst horrifying revelations about Planned Parenthood and the Democrats' defeat within days of any meaningful bills to protect even late term babies.)

Once again the absolute glee of the media over the pope's terrific speech illustrates their capacity to define it according to their world view. He is "reshaping Catholic politics." What a shepherd! Meanwhile the tiny lambs are led unimpeded to the slaughter.

Oh...by the way, Congress votes today at 2:00 p.m. on a bill that would deny federal funding to Planned Parenthood for a year. McConnell says he will call for a roll call vote. That's good. We will see whether the pope's speech this morning had any impact on the Democrats, especially the Democrats who are Catholic. Do you think Nancy Pelosi et al will vote to defund Planned Parenthood?

In 2014 35 executions took place in this country. That's thirty-five. 35. XXXV. Dare I say ONLY 35? How much have our insane bishops invested in this monumental injustice compared to their spiritual direction about abortion?

Turned the speech on for about 5 seconds just as Francis was describing "money that is drenched in blood, often innocent blood". In that moment I prayed he was talking about Planned Parenthood. He went on: "In the face of this shameful [abortion] and culpable silence [the American Church], it is our duty [the Catholic Church] to confront the problem [Culture of death] and to stop [abortion] the arms trade.

Did he say ARMS trade? Turned the speech off as quickly as I could get to the remote. Worse than listening to Obama.

After this visit by the Pope to the USA, maybe even some of the "rose colored glasses" crowd (aka the lemmings) will get the picture! These are truly the Dark Ages for the Church.

With so much coverage about the Pope's visit, bigpulpit.com has been helpful for the headlines roundup.
Of interest, there's an article on "National Catholic Register" that the Pope made an unscheduled visit to the Little Sisters of the Poor at their DC house yesterday.

Too many popes here. Not enough Christians. Who are you to criticize?

I feel so unsettled about this visit. People who were hostile when poor Benedict cane are giddy now. That is a bad sign.

Jane, our intelligence is called "the seat of judgment." The pope's actions are as open to criticism as anyone's. Didn't St. Paul challenge Peter? Didn't Catherine of Siena challenge several popes and urge them unrelentingly to return to Rome. Faithful laity love and pray for their shepherds. That doesn't mean they can't question their speech and their actions. And there is plenty to question with this pope.

This Pope would get the benefit of the doubt if he was more open about the issues of the day and the culture wars. Pope Benedict in several speeches left several things out, but his writings were very accessible, and we knew exactly where he stood. This is not the same for Pope Francis, there isn't much public noise from him (private to prelates, sure)....This Pope leaves A LOT to desire, but eyes on Christ, not the storm that is this pontificate.