Have a Little Cake and Coffee at the Death Cafe 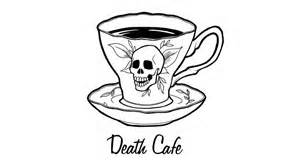 A friend sent me an email earlier today saying she'd seen a sign in a local coffee shop in Berryville advertising a "death cafe." Yes, you read that right. It's the latest thing. Get together over coffee and cake and talk about death. One promoter of these events says she's "passionate about death."

The founder of the Death Cafe, Bernard Crettaz, organized the first one in 2004. He wanted to remove what he described as the "tyrannical silence" around the topic of death. Crettaz also wanted to renew the pagan tradition of the "funeral feast" in which "the living would renew their bonds while letting go of what weighed on their hearts." The tradition of the funeral feast has some bizarre elements and in some cultures includes animal sacrifice and practices to prevent the spirit of the dead from haunting the living.


Christians should find the notion of a "tyrannical silence" about death rather bizarre. Meditating on the four last things: death, judgment, heaven, and hell has been preached and encouraged by many saints throughout the ages. There is no "taboo" in Christianity around the subject of death.  In fact, it's become somewhat of a joke in my family that I bring death up so often. Why not? I go to Mass almost every day where a central feature of the church is the dead body of Christ on the cross. And, in fact, it's a good thing to remember to prepare for death spiritually and to pray for our dead loved ones. You can hardly do that without thinking about death.

When I started reading about the death cafes, it reminded me of the fascination with death back in the '80s. Death and dying was being introduced into high school curricula. Some teachers even took students on field trips to funeral homes. I thought it was bizarre at the time. After all, death is a natural part of life and we all experience it in our families and among friends. Is it really necessary to organize a special "death field trip" or "death cafe" to talk about it?

It is simply, in my opinion, one more signpost of the culture of death. Rather than focus on what comes after death, our confrontation with the Author of Life, the process of death becomes the focus. But to what purpose? Unless the process leads to getting right with God before we die, it is totally useless! O Jesus, the Lord of Life and our Judge after death, have mercy on us.
Posted by Mary Ann Kreitzer at 10:00 PM