Kim Davis: the Canary in the Mine 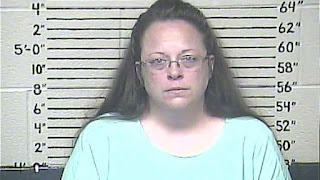 The treatment of Kentucky county
clerk Kim Davis who refused to issue a same sex marriage license is a warning to Christians. Like the canaries in the coal mines who let miners know when the air was getting impossible to breathe, the jailing of Kim Davis for refusing to bend to a federal judge's demand indicates exactly where this is going. Like the poisoned air in the mine threatening the life of the miners, the cultural air is poisonous for Christians. They will not be tolerated when they stand up for the natural law or listen to the voice of the people. Kentucky voters rejected same-sex marriage in 2004, but liberal judges have been making law for years. Who cares what the voters want, the bigots in black robes will make the rules even when they overturn thousands of years of moral rule. So despite the fact that the state constitution of Kentucky says marriage is between a man and a woman, Davis must bow to the liberal tyrant judge. When she wouldn't, she was jailed for contempt. But the real contempt is on the part of the judge for the Judeo-Christian ethic.

What is the reality here? Kim Davis engaged in a courageous act of civil disobedience against a mad judiciary. Suppose you were a government employee who lived in Germany in 1939 and you received an order to arrest Jews and load them on cattle cars heading for concentration camps. Would you comply? Suppose you were a doctor ordered to carry out the euthanasia laws against the handicapped. Would you participate in gassing the innocent?

Homosexuals have framed the debate as one of civil rights equal to discrimination against blacks. It's a diabolical lie. Blacks suffered because of the color of their skin, a genetic trait. Homosexuals want special privileges based on their BEHAVIOR, i.e., same-sex sodomy.

But the fact is that "gays" don't really want marriage at all. In a recent article in The Nation, four authors outline an agenda that includes disestablishing marriage altogether. What they appear to want is for all things to be viewed through a "gay" lens: relationships, economic factors, health care, work, social issues -- all must be seen according to the LGBTQ vision. The authors promote the "progressive" left and call for crushing the right. No one may dissent from their viewpoint. Christians will bend to the beast or be fed to the lions.

Like I said, the treatment of Kim Davis is the canary in the mine. The Christians in this country will either join together to fight, or they will "hang" separately.
Posted by Mary Ann Kreitzer at 9:27 AM

However, there is another way to look at this subject - May I suggest you read the text of a homily preached by Fr Jay Scott Newman (fathernewman.blogspot.com, it is the first homily (of several) posted). It was actually posted in responce to a Supreme Court ruling last fall, but applies well to the issue here as well.

FYI, he is the priest from the diocese of Charleston (SC) who caused a ruckus some were in 2007 when he said Catholics who vote for candidates that rare pro-abortion should not receive communion. In short, he sees an opportunity for for Christians in this post-Cristian society we are now living within. They should make this guy the Pope.

Perhaps the worst thing about the imprisonment of Kim Davis is that the "legislating" judge is Catholic. Another Judas.

To the point in your last sentence, it is incumbent upon the Catholic Church and especially on the Diocese of Lexingon to raise its voice. So far we haven't heard a peep from them.

Thank you so much for this blog! I do not know if you have had an opportunity to view the site Alan Holck suggests, but WOW! Thanks Alan...this is our call...this is hope...this is going to everyone I know who needs it at this very moment in time. May God bless you all!

She is fighting for Christian privilege. If you don't want to be a part of something like this you shouldn't be working in a secular job. It's a shame she is wasting tax dollars on her incarceration.

Not so, Anonymous. She is fighting homosexual privilege which has redefined the thousands of years of cultures recognizing marriage as a union of man and woman for the procreation, rearing and education of children as well as the mutual love of the spouses.

So should a Cathoilic clerk be allowed to deny marriage licences to divorced people? Should a Muslim clerk refuse to serve you as a woman? Can he deny a Jewish couple a marriage license. How far do you want this to go?

If Davis was brave she would give up the govt job she hand her entire family have used as if it's her own family business and use all that energy to practice her faith and even work to over turn. As it is she is a walking stereotype of a Christian hypocrite to add to the circus car with the Diggers etc.

If you want to get technical about it Mary Ann, it's not even a LAW that she's breaking. It's a 'ruling' from the S.C. We have NEVER been required to obey S.C. 'rulings' to my knowledge. There was no law that Kim Davis broke. This is an activist Judge that is in bed with the gay activists both inside and outside the government.

And I would encourage everyone to jump over to Restore DC Catholicism's blog site for a link to the Diocese in Lexington. I already sent in my email to the Bishop asking him to make a public statement in her defense and in the defense of Catholic teaching. That said, I'm not holding my breath. The Catholic Church in so many places now is beholden to government officials, and in particular the progressive branch. Sad as it is, we see them serving mammon and throwing Our Dear Lord to the wind. Pray the Rosary.

Perhaps you should go back to government 101, Anonymous. Read Blackstone's commentaries. And after that check your history. Would you have jumped on the Dred Scott bandwagon? Would you put Rosa Parks in jail? Who was right? Those who worked the underground railroad or those who lemming-like "obeyed the law." You might also read Martin Luther King. Seems I recall a letter from the Birmingham jail.

BTW I have a Masters in Government/Public Administration.