Margaret Sanger was a White Supremacist and Vicious Racist - #BustRacism 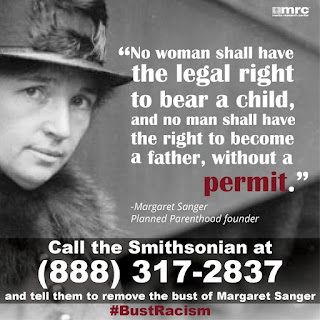 So why is she being honored by the Smithsonian!

You can help get Sanger off her pedestal and into the trash can of history with other evil tyrants. Sanger and her cronies did more to establish the culture of death in America than almost any other modern figure. She considered minorities, Jews, Catholics, the "feeble-minded," etc. as "human weeds," and she did whatever she could to help exterminate them. While publicly pretending to be against abortion, she actually gave women advice on how to bring their period if they missed it. Read her pamphlet on Family Limitation.  She gave an interview in 1947 calling for a moratorium on women having babies. Sanger was a selfish, power-mad narcissist.

Help get her bust out of the Smithsonian. Media Research Center is urging citizens to call the Smithsonian and courteously demand the removal of the bust from the taxpayer funded museum. If they need a place to put it suggest the Holocaust Museum. She was a big fan of Adolf Hitler.
Posted by Mary Ann Kreitzer at 10:33 AM