For all the See-No-Evil Cheerleaders of the Papal Visit -- Explain This! 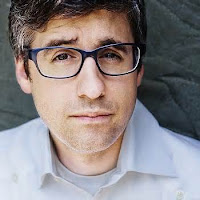 Correction: I've updated the article below. Rocca was a lector at the papal Mass in New York City at Madison Square Garden, not the Mass in Philadelphia. I apologize for the error.

Michael Hichborn at the Lepanto Institute is getting the mailed fist in the face for exposing the little wigglies under the bishops' rock over the World Meeting of Families. (Somehow, I don't think that's the rock of the Church Jesus was talking about when he said, "Thou art Peter.") But the homosexual network doesn't just work in Philly. The Archdiocese of New York and Cardinal Dolan had their own homosexual scandal associated with the pope's visit when they let an out and proud (and well-known) homosexual reporter and comedian lector at the papal Mass at Madison Square Garden. Somebody has some serious 'splainin' to do. Cardinal Dolan?

Who exactly recommended and approved this man? Rocca is a reporter and comic. How many people knew exactly how out and proud the lector was? Huffpo was gushing about his participation. No, folks, it was no accident. It was just as deliberate as selecting a woman to play Jesus in the Stations of the Cross when Pope John Paul II came to the U.S. We have an agenda going on at the highest levels of the Church with bishops who have about as much love for Christ and his
flock as Hillary Clinton does for pro-life activists.
This was a major scandal and here's what Fr. Mark Pilon says about scandal.


among the sins deserving of Hell, Jesus clearly places high on the list the sin of scandalizing the little ones, that is, the simple faithful whom Jesus loves dearly because of their innocence and trust. Scandal is especially serious when it is directed at the innocent who trust the one who scandalizes them. Scandal mean leading someone else into sin by one’s words or deeds, which may lead the innocent to think that something sinful is ok, in other words my actions or words serve to deform the conscience of a little one who has reason to trust me on account of a relationship of authority or friendship....

The sin of scandal is likewise gravely sinful when adults are mislead by priests in the formation of their consciences. I am not taking about the person who goes shopping to find a priest to tell him this or that act which the church condemns is ok. That’s not scandal; that’s looking for support for an already distorted conscience.

I am speaking here about very simple Catholics, perhaps not well educated, who are told by priests or lay teachers that they can do things that the Church, with the authority of Christ, teaches are immoral. They are advised to follow their own consciences if they think that they have some good reason to ignore the Church’s teaching. Thus, such priests or laity are really asserting that the Church’s official teaching is just one opinion among others and is not binding on anyone in the formation of his or her conscience. They insist that each person has to judge whether the Church’s teaching is true or false as it applies to his or her individual circumstances. In other words there are no universally valid norms of morality that bind everyone in their formation of conscience.

Many Catholics already believe that homosexual "marriage" is wonderful. How did this help to correct their disagreement with Church teaching? Obviously, it didn't. It confirmed them in error and, perhaps, led more Catholics to say, "Well, it must be okay after all."

When some friends and I began Les Femmes over twenty years ago it was to fight the battle against the enemies within the Church -- and there are many.

A big round of applause for Michael Hichborn and the Toronto Catholic Witness blog for exposing this rot. You can't cure a cancer if you don't first identify the disease. Bur they will pay a price in vilification and calumny. Please pray for all the truth tellers who put love of the faith above love for worldly respect.

Pray for Holy Mother Church, the poor battered bride of Christ. Our Lady, Queen of the Clergy, intercede for your people so desperately in need of holy shepherds. And please convert your clergy who are in danger of hell for the sin of scandal. Most Sacred Heart of Jesus, have mercy on us.
Posted by Mary Ann Kreitzer at 8:48 AM

Also in regards to this 'American Visit' by the Pope: Fr. Rosica has called him 'The Prince of Peace'???!!! The title reserved only for Our Lord Jesus???!!! Not to speak of the Congressman who took his water glass after his Congressional Speech and he and his whole family drank from it and then blessed themselves with it???!!! Other bloggers have called this CREEPY, but I call it DIABOLICAL DISORIENTATION TO THE FULLEST!!! No longer is this Pope just 'hard to understand', those days are long gone. This Pope is a NIGHTMARE.

I am watching the coverage of the Pope in Philly today.I just turned it off because it seems every local News station has their token aberrosexual reporter co anchoring the event. They are now telling people they can come to the outdoor Mass even without a ticket.
Perhaps by now some of the Papal cheer leading Catholics have realized the trip may not not be worth it after all.
IMHO, listening to the Papal talks has become more like a UN /Obama political promotion event ,rather than a promotion for Our Lord Jesus Christ and the Truths of the Faith!
The ONLY mention of anything remotely sinful is apparently lacking the all inclusive
globalist agenda and sinning against mother earth!

Churchmilitant has the story. This guy was at the Madison square garden mass. The clerical elites are doubling down on their "make all things gay" agenda. Cardinal Kramden is driving the Madison Avenue bus. And what is the destination? Homosexual unions you say? The Jesus pill for all? The elimination of the word "disordered? I have come to believe the endgame is to make the priesthood openly and sinlessly gay. As it is probably already the worlds largest same sex organization with many many levels of brotherly love, what better way to take out Gods management team than to applaud homosexuality and give the disordered lifestyle it's very own sacrament.

So sad to read about this article.May the Lord have mercy on these sins.

I have come to believe the endgame is to make the priesthood openly and sinlessly gay. As it is probably already the worlds largest same sex organization with many many levels of brotherly love, what better way to take out Gods management team than to applaud homosexuality and give the disordered lifestyle it's very own sacrament.

St. Peter Damian beat you to the punch by a millennium. Do some research on "Liber Gommorahianus."

So who do we line up against the wall and shoot?

Mary, did you read Fr. Pilon's article on scandal? Perhaps you think scandal (which causes others to sin jeopardizing their salvation) is no big deal.

BTW, I don't need to shoot anyone. JESUS already promised them a millstone. I'll leave the punishment to Him. But I will blow the warning trumpet and pray and sacrifice for poor sinners as Jacinta called them. Mo Rocca and his buddies certainly had their ears tickled during this papal visit.

Sometimes I wonder if you believe that anyone goes to hell.

I was telling my wife that in the past I've been angry and sad at some of the scandal brought on by the church and laity alike.

But, Mark Wahlberg as MC, this mo roca character and the priest selfies during Mass, I'm embarrassed for the first time to be a Catholic. It's a different sort of embarrassment, I suppose. I'm not embarrassed about Jesus or the Faith. Just sorta not wanting to be associated with this... I don't know. Foolishness.

Cardinal Dolan is getting blamed for this, and rightly so, but he would never had done it unless he was sure Pope "who am I to judge" Francis would approve.