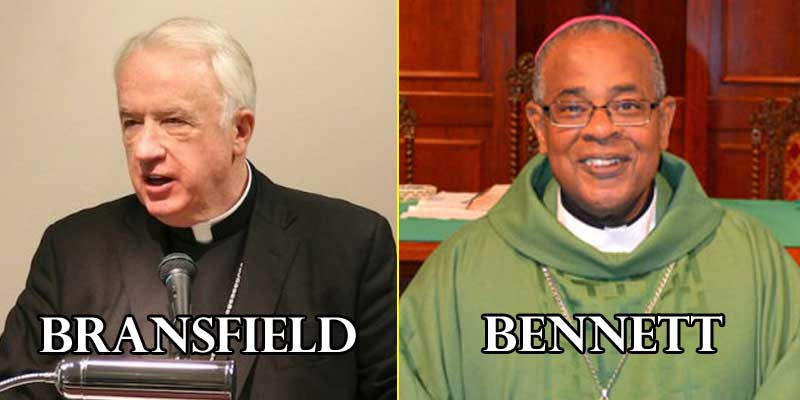 Archbishop William Lori, Administrator of the Wheeling-Charleston Diocese released a letter yesterday permanently banning two bishops from ministry there and in his home diocese of Baltimore. Bishop Michael Bransfield, former bishop of the West Virginia diocese and Bishop Gordon Bennett, S. J., former auxiliary bishop of Baltimore are accused of sexually harassing adults. Bransfield also stands accused of financial improprieties. (No surprise! He spent buckets of money in Wheeling on his own personal comforts with expensive renovations to his residence, a personal chef, wining and dining at fine restaurants, etc.)


It would be comforting to think that the people of West Virginia can breathe a sigh of relief now that Bransfield is gone.... except for the fact that the diocesan chancery is filled with roman collars cut from the same cloth. Men like him excel at surrounding themselves with sycophants and yes-men made in their own image and likeness, and they remain well-entrenched in the chancery.

The Lavender Mafia excels at creating more diocesan bureaucrats in their own image and likeness. If you want to dip your toes in the Wheeling-Charleston swamp visit the "Nabi sayeth" page. Getting rid of Bransfield in no way drains that particular alligator-infested cess pool.

And don't forget Bransfield's connections to McCarrick and Wuerl. The three made up the triumvirate of power at the Papal Foundation whose accounting practices were so unprofessional they made fraud and embezzlement easy. My own bishop, Michael Burbidge was secretary to the Board of Trustees at the same time that Cardinal Wuerl was Chairman of the Board, McCarrick was a board member, and Bransfield was President of the Board of Trustees (all listed in the 2011 annual report). A number of other notorious bishops including Mahony, Maida, Egan, and Keeler were also members or trustees.  In a detailed article at First Things last September, Michael O'Brien wrote this:


According to multiple independent interviews with people involved in the Papal Foundation, over its nearly three-decade period of grant making, virtually no accounting or audits were performed to confirm that individual grants reached their intended beneficiaries after annual checks were sent to the Secretariat of State. Moreover, the Foundation allegedly failed to make any systematic attempt to confirm that funds received by the intended beneficiaries were used for charitable purposes....

The cardinals’ board of the Papal Foundation apparently distributed its charitable grants in a manner that made them remarkably vulnerable to fraud and embezzlement, and in so doing, the board appears to have contravened its own bylaws, and thus violated Pennsylvania civil law as well. The Foundation’s chosen partner in distributing grants, the Vatican’s Secretariat of State, has a longstanding reputation of financial mismanagement. In recent years the Secretary of State himself, Cardinal Parolin’s predecessor Cardinal Tarcisio Bertone, was personally involved in misappropriating $500,000 in charitable assets to double pay a contractor friend to renovate his Vatican apartment, and also in directing millions of dollars from the Holy See into now-failed Italian television venture owned by his friends.

Makes you wonder what really happened to those millions of dollars, doesn't it?

I confess I'm not too confident that Archbishop Lori's directives will make much difference in the long run. We've heard this song and watched this dance so often over the past two decades it's getting boring. They roll a few heads, establish new procedures, assure the laity the problem is solved and dig in deeper than ever.

Remember the old adage, "Fool me once, shame on you; fool me twice, shame on me." Let's resolve to be nobody's fool, especially the bishops. Just keep thinking about how Pope Francis scuttled the USCCB meeting last November which intended to deal with the clergy sex abuse scandal. The pope assured us that the February Vatican meeting would REALLY resolve things.

What did we get, hmm? More tap dancing, a parade of victims telling horror stories, and the bishops with their crocodile tears and "new mechanisms" for resolutions as Cardinal DiNardo put it.

Let's face it. There are plenty more bishops like Bransfield and Bennett in active ministry. The Tiber overflows with them. Pray and sacrifice for Holy Mother Church that the Holy Spirit will send a wind to sweep away the filth and restore her. Lord Jesus, have mercy on us.
Posted by Mary Ann Kreitzer at 9:04 PM

"Sent to Coventry"? What does that refer to? No mention of it in your post.

Thank you for the link to the First Things article. What a terrific article. The comments are also amazing.

I apologize acardinal. I should have explained.

Sent to Coventry is an English saying that means this: "...to deliberately ostracise someone. Typically, this is done by not talking to them, avoiding their company, and acting as if they no longer exist. Victims are treated as though they are completely invisible and inaudible. The Coventry in the phrase is the cathedral city in the West Midlands." It just popped into my head while I was writing the post. I originally thought of the joke about two lawyers at the bottom of the sea being a good beginning. But it seemed to me that being "sent to Coventry" is more descriptive of how the hierarchy is handling the problem. Pick a few scapegoats, throw them under the bus, wipe your hands, and continue with business as usual.

Finally with the "official" report of the so-called allegations being sent to Rome it will be interesting to see how soon the necessary penalities are put into place. Will the Archbishop issue another letter of transparency to the priests and laity of what the Congregation of Bishops has decided? Notice that nothing is ever mentioned about "Uncle Ted" and if he is still living at the monastery or is out on his own. No doubt that the archbishop is looking to move onto "bigger and better things" and get someone to step in and lead the faithful of WV to healing and greener pastures. It is certainly going to get very interesting the diocese and the Church in the US since the "Dog and Pony" show will be meeting in June to discuss how they can discipline one another for grave infractions. Rome's meeting accomplished nothing and neither will this one!

You nailed it Mary Ann! "Pick a few scapegoats, throw them under the bus, wipe your hands, and continue with business as usual."........This is EXACTLY their M.O.