Why Communion Rails Make a Difference 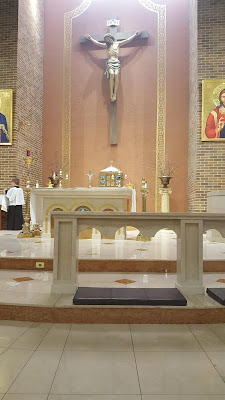 I attended mass on Sunday at St. Catherine’s of Sienna in Great Falls, VA.  It isn’t far from where I live and when I go there, I not only get to enjoy the Latin mass, but also a great sermon from Fr. Jerry Pokorsky who never fails to deliver a good dose of inspiration and truth.  I went this week to see for myself their new Communion Rail, having read his most recent article posted on “The Catholic Thing” website titled, “The Communion Rail and Complementarity.” I recognized his own church from the photo in the article and knew the rail in the picture was there waiting for me to experience firsthand...


I was particularly moved in reading his article by his assessment of the now familiar method of receiving communion without a rail:


“When there isn’t a Communion rail, the people approach the Communion station and, after receiving Communion, hurriedly depart.  A panoramic devotional view of a beautiful sanctuary, like the splendor of decorations adorning a wedding feast, is thus unlikely.  The reception of Communion is individualistic, not communal.  The priest stands still distributing the Hosts; the people hustle to and fro.”

I think we have all grown so used to lining up and getting our portion like the poor in a bread line or refugees in a crisis center hoping to get needed supplies, that we don’t even think of what was lost after the changes of Vatican II.  There’s nothing wrong with what we’ve done since the grand communion rails of our distant past were ripped from their place at the edge of our sanctuaries, but there is a lot that is missing as a result of that loss.
It was more than just furniture that got tossed.  It was more than a relic or a remnant of a bi-gone era that we were convinced to remove.  What is lost without a rail, according to Fr. Pokorsky, is the opportunity to pause and gaze upon the splendor of the sanctuary.  In his own words,


“At Communion time, the people approach the sanctuary to receive.  As they kneel, there is a brief time to contemplate the artistry of the altar, the tabernacle, the Crucifix, and the entire sanctuary.  They pause, even if only for a few seconds, as the priest efficiently distributes the Hosts.  The priest is moving and working hard in his fatherly task.   Shoulder to shoulder, the faithful receive from the table of the Lord as a family.  There is no rush to depart.  All of this reverses the individualistic dynamic of receiving while standing in a Communion line.” (My emphasis added.)

I encourage you to click the link above and read the entire article.  I have touched on only one aspect of his endorsement of this tradition that is making a comeback, however slowly, as only a few parishes so far have reinstalled a rail.  This is partly due, no doubt, to the extraordinary cost of building one in keeping with the existing church.  More so than just the cost of construction in some cases is the continued reluctance of some to accept AND understand that the sheep not only WANT this back again in our churches, but we are quite capable of accepting the change and adjusting to it quickly.

There seems to be a fear that any change will upset the cart and give one more person the justification to “walk away” and never come back.  I know only this.  As one of the sheep, I find it positively amazing to be on my knees, elbow to elbow with other sheep, whom I may or may not know, waiting, anticipating, and imagining the delight I will experience when finally it is my turn, and the Body of Christ rests on my tongue.

I converted to Catholicism in 1968.  I may have received Holy Communion at a rail a few times before all the churches where we lived were “renovated” and the rails were no more.  It has been so long ago now I honestly can’t recall any other way but lining up and approaching a priest or minister at the head of a line.  Nevertheless, all this time, I knew there was that “other way” and it must have been better.
If we want to bring back receiving on the tongue and shun the irreverence of eating from our hand, then a rail is the way to go.  If we want people to once again begin to contemplate the altar of sacrifice and the reality of the Body of Christ, then the rail is the answer.  If we want the next generation to know there is something VERY different in our mass from all other religions that are Christian by name, then we need to give each little child the chance to receive ON THEIR KNEES in humble obedience at a rail.  And if we want to practice our faith in the tradition of our ancestors and the saints of old, then we need to stop the station points and bring back the thing every Catholic in their heart knows is part of being Roman Catholics. 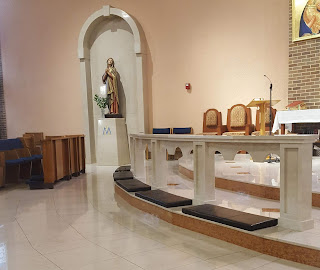