Jesus and the devil go to confession, get the same penance

Jesus goes into the confessional and tells the priest that He's perfect, that He's like God, that in fact He is God and likes babies and people and animals and the beautiful world He created, that He tries to guide each person to heaven, that He wants sinners to amend their lives and live with Him in heaven forever.

The priest thinks, "Hmmmm - a bit prideful, isn't He. Pride is definitely a sin," so he gives Jesus His penance: "Do an act of mercy." Jesus then goes out of the confessional to heal the sick, make the blind see and the deaf hear. He raises the dead and then does the most merciful act of all - He dies on the cross so that we can be redeemed and live in heaven with Him for eternity.

The priest thinks, "Wow, what a great human being he is, giving himself unconditionally to help others so much," so he gives the devil his penance: "Do an act of mercy," knowing that this fine person will continue his good works, whatever they might be. The devil then goes out of the confessional to volunteer as a deathscort for Panned Parenthood, to participate in forming autonomous zones for freedom of all people, to buy a boat to shuttle people across seas from continent to continent to free countries, to become a professor forming young minds, to become a priest enlightening society to the holiness of same sex marriage, to become a politician passing laws so that all people will be free (from God).

Moral relativism – "the notion that there are no moral truths, and thus 'morals' are subjective preferences relative to individuals or societies – is widespread in our day, particularly among the younger segments of society. I would venture to say that moral relativism appeals to so many people because it gives them the intellectual justification they need to engage in their sins of choice. This cheap form of moral justification is not without its costs, however."

With moral relativism, no matter what is confessed, every person receives the same penance. However, priests are supposed to educate Catholics, to help us conform to the Gospel of Jesus Christ, not conform ourselves to this world, yet, there's not even a mention of amending our lives because primacy of conscience - no matter what we think - is apparently (and erroneously) supreme. How are we to know how to make good choices, to go against the current, to avoid the easy way out of a situation or compromise? If we want to be a radical, there is nothing more radical than living the demands of the Gospel with a well-formed conscience, but with moral relativism, a priest would be reported for suggesting an active homosexual in a fake marriage of sodomite activity amend his life and live chastely. Or amend our conscience to obey the Church's teaching that to dismember a child in the womb is a mortal sin that will send us to hell.


I cannot remember the last time I went to confession and received spiritual advice on how to become a better person, to possibly reflect more on what I post before blurting it out and pressing "publish" - in other words, spiritual advice on how to not break the Eighth Commandment as well as any of the other Ten Commandments. We're in the confessional to amend our lives and ask for God's forgiveness, not to secure approval to continue in our sins. 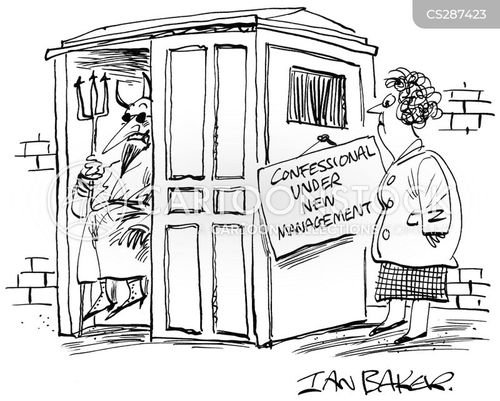 Years ago, here in the Diocese of Orlando, I went to a predator Franciscan priest for confession. He was giving a two day retreat at our parish - either Advent or Easter reflections - and offered Confession. I knew he was a heretic - literally - but needed to go to Confession and, in my naivety, thought it would fulfill my obligation.

Behind me in line was a mother with her teenage son. The mother seemed excited for her son to have the opportunity to confess to such a highly regarded priest. After all, this priest was fairly famous in the world. He was promoted by the diocese and gave retreats at parishes in Orlando and around the US.

I went in and began my confession which was in the former traditional confessional where the partition had been removed in order that two arm chairs might be placed there....very closed and tight with two people and the two armchairs angled to semi-face one another.

I began my confession when suddenly the priest hiked his left leg over the arm of the chair facing me. He had on a robe which hid his crotch, THANK GOD. Then he started twisting his foot around. I felt like a stripper - stripping my soul of sins while he watched, sipping an invisible beer. All that was missing were neon disco lights and a pole. He then said - and these are his words verbatim clearly stamped into my memory for all eternity: "Surely you don't believe everything the Church teaches, do you?"

I told him Yes I did, finished my confession on the spot and raced out. Before I could tell the mother NOT to send her teenage son in there with that pervert, it was too late. She had already shoved him in as fast as she could. Did the  priest hike his leg up for the teenage boy to view his crotch? Did he suggest to the boy not to believe everything - or ANYTHING - the Church teaches? I will never know and it will be on my conscience forever that I did not tell the mother to get her boy out of there.

We printed the incident in the Orlando Truth and soon thereafter this priest was scuttled away by his order to Wheeling, West Virginia. I warned people there not to go near him. I don't know how long he stayed In the Wheeling Diocese but he's now at a parish in Pennsylvania and his former Franciscan superior is in prison.

It is the legions of this kind of priest that are keeping the 100 million abortion wracked souls out of the confessional. When you're ready to confess such an ugly sin, who wants to be absolved by Father Twinkie? To signal that they take Gods law seriously, priests should preach humanae vitae regularly.