Is Rome Getting Ready to Drop the Guillotine on the Traditional Latin Mass? 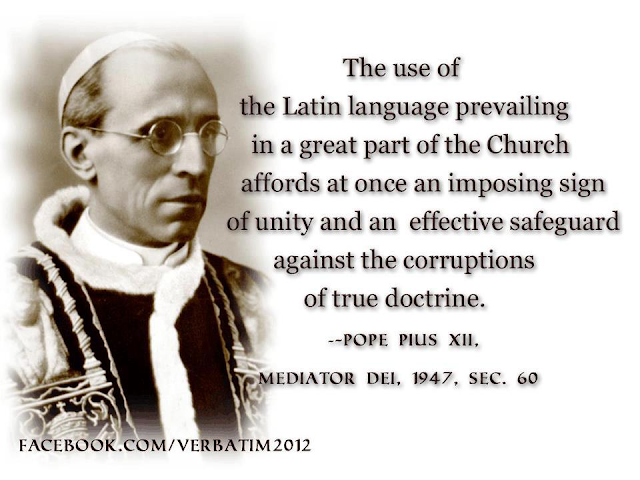 Pope's Plan to Restrict Traditional Latin Mass Backed by Two Curial Cardinals
The rumor mill has been churning with warnings that the Latin Mass is about to be deep-sixed with all kinds of restrictions and limitations. We saw this already when Rome forbade the TLM from St. Peter's basilica and made sure of it by restricting private Masses at the individual side altars. An occasional Mass is allowed in the catacombs. Fitting eh? The faithful are being sent back to the catacombs! Only the persecution these days isn't coming from the pagan Roman emperors, but from pagans in the Church who didn't mind giving Pachamama a place of honor during Amizonia freak show.
So let me summarize The Remnant's article for you:

1. A Vatican document, reportedly in its third draft, is at the CDF and its contents are backed by at least two curial cardinals, Secretary of State Pietro Parolin and Prefect of the Congregation of Bishops Marc Ouelett. The document "threatens to thwart the growth of the Traditional Latin Mass and other sacraments particularly among diocesan clergy."
2. The first draft was considered "too severe" and included an exceptionally harsh letter from the pope. Back to the drawing board.
3. "Under the current plan, Msgr. García, who has served as head of office in the Congregation for Divine Worship since 2016, has been elevated to the episcopate in order to assume the responsibilities formerly carried out under Ecclesia Dei by its former president, Archbishop Guido Pozzo. A professor at the Pontifical Liturgical Institute at the Pontifical Athenaeum Sant’Anselmo, Msgr. García is not known to share Benedict XVI’s views on the sacred liturgy, one source describing him as 'the most anti-Tridentine Mass person ever known.'” Are you surprised?
4. A Vatican survey was sent to all the bishops of the world. Most responses were favorable. "One source familiar with the consultation document said that, although the questions were notably biased against Summorum Pontificum, or formulated in a manner that did not always elicit a clear and specific response, what emerged from the questionnaire is how the Traditional Latin Mass has taken root. It has revealed that even in unexpected places, the old Mass is embraced and loved by young people and families, is bearing fruit in flourishing parishes, priestly and religious vocations, and in greater prayer and devotion among the faithful."
5. The article warns that "THE SUMMORUM PONTIFICUM GALAXY PREPARES TO RESIST". Interesting analogy, eh? We who love the faith and the traditional Latin Mass will stand against the Empire and its Darth Vader and storm troopers.
6. The article concludes suggesting people write respectfully to the CDF and the pope and includes contact information.

More and more Archbishop Marcel Lefebvre appears as a prophet.  When the world woke up and found itself Modernist, he defended the faith as expressed in Catholic doctrine, Scripture, and Tradition. I thank God for his courage and his determination. Like St. Athanasius, when the rubber met the road and he faced excommunication he didn't run from the wolves, but stood firm. Like  St. Athanasius before him, he clung to the barque of Peter as founded by Christ Jesus and threw life savers to the clergy and flock. We must do the same, come what may, as we rebel against the modernist wolves running the Church. It is not disobedient to defend the faith against those wearing roman collars who come preaching a different Christ, a different gospel, and a different Spirit.  With St. Paul we must be determined to pursue the truth lest our "minds should be corrupted, and fall from the simplicity that is in Christ."

Posted by Mary Ann Kreitzer at 4:55 AM

Amen to it all!

I just found this. Haven’t even started it yet, but wanted to share and increase exposure to its message.

“ ... I would like to draw you attention to a 20+ part series that the Society of St. Pius X is producing which lays out the background about how this cabal of German bishops and their Belgian, Dutch and French sidekicks SWINDLED the Council Fathers into legitimizing a “pastoral council that did not promulgate any new dogma” whose real intent was to switch the ordering of the Faith from OBJECTIVE TRUTH to a form of nihilistic relativism that would be able to “situational ethic” literally any sin or deviancy.”

Incompatible (adj) def: So opposed in character as to be incapable of existing together.

Mary Ann, your link "Pope plans to restrict Traditional Latin Mass" at the bottom of the post takes us to a rather goofy picture of James Martin>

Thanks for the heads up and editorial help, Janet. I fixed it.

If a group of men wanted to destroy the visible Church by watering down the Truth and driving people away, and then to cause an outright schism, what would they do differently from what has been done in the past 55 years, and especially the last eight?